We touched the rock, visited Zingermans in Ann Arbor, and walked the orange and blue streets of Champaign. After a visit to The Bank in Minneapolis and West Lafayette, it's time to walk over the Red Cedar and take a look at the 2010 Michigan State Spartan football team.

SIXTH IN A SERIES: THE MICHIGAN STATE SPRING FIELD GUIDE

Michigan State at a glance...

My seat gave me perfect vantage point for the Central Michigan onside kick that would eventually lead to MSU's first, and definitely not last, disappointing 2009 loss. I watched the ball skip, skip, skip, and then miraculously hop over the wave of Spartans and into the waiting hands of a Chippewa.This negative turn of events would be the norm for a team predicted to finish third in the Big Ten. 2009 would be full of heartbreaking defeats at the hands of Notre Dame (Cousins inexplicable wounded duck), Iowa (guard the slant? nope), Minnesota (that Gopher on the ground...was down, I think), and finally Texas Tech (another momo killing 4th quarter Cousins pick). 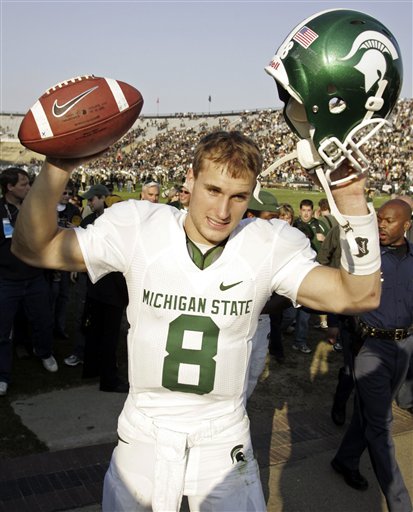 But this Spartan team featured youth at so many positions, while most members in the defensive backfield spent 2009 suspended or injured. So while Purdue is my Biggest Sweatheart, Minnesota is my Perpetual Disappointment, and Michigan is my Biggest Enigma, I predict nothing but improvement for the 2010 Spartans. My reasons are basic: defensive changes, experienced starters, and a cake offseason schedule.

The Spartan coaching, which I spent last year railing against, has given me hope for 2010. Discussion and implementation of a 3-4 defensive formation fulfills a request I made in my coaching grade:

One thing I can shred Dantonio for is his continued support of Pat Narduzzi, the D-Co, and the insistence on not meddling in the defensive scheming. Forgodsakes, Dantonio was the DC at Ohio State during the 2002 national title year, he's got to know something. Wouldn't it be nice if it leaked out that Dantonio was going to "play a more active role in the defense" during the 2010 season?

The 3-4 seems to play directly into the Spartans personnel. The physically impressive linebacker corps, featuring All-American Greg Jones, Eric Gordon, and Chris Norman, should benefit greatly from a change here. Last years' defense was a staid and predictable 4-3 formation that left linebackers and cornerbacks in bad position to make plays in the secondary. This years defense will feature multiple defensive formations that the players are familiar with and able to run effectively. Fantastic, Mark D., fantastic.

And even if the 3-4 discussion is some odd smokescreen, never to materialize into an effective formation, Spartan fans should take heart in the tremendous talent returning on both sides of the ball. A special notice should be made of cornerback Johnny Adams, the talented RS corner who missed all of 2009. His ball hawking ability and fearless play were obvious the first time he stepped on the field in 2008 and if healthy, he's a starting CB.

Kirk Cousins, Keshawn Martin, Larry Capers, Edwin Baker, Charlie Gantt, Mark Dell, B.J. Cunningham...MSU is set at the skill positions. Speed, skill, improved pass catching by the receivers, improved strength by the running backs...This is an offensive system on the upswing thanks to brilliant OC Don Treadwell and the rocket-cannon arm of Cousins. The O-Line will be the weak point - Can they protect Cousins as effectively as last year? Will they show a nasty streak to move the pile when it comes to the run game, something that was lacking in 2009?

Backup QB Keith Nichol has moved to WR and taken the spot of departed star Blair White. By all LSJ accounts, it has been a successful transition and stories of his athleticism have been relayed far and wide. Martin has gamebreaking speed and can score on end-arounds also. 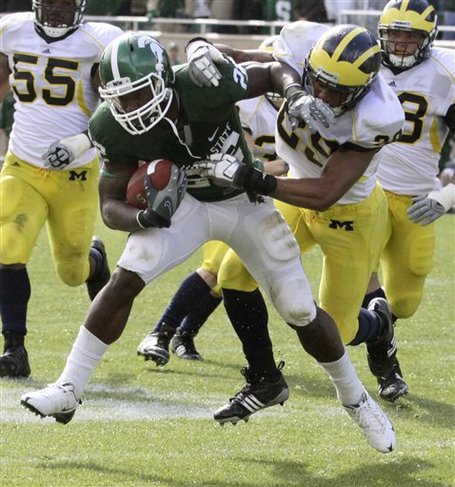 Defensively, things can only get better on a unit that featured the worst secondary in Spartan history. The aforementioned Adams will add playmaking skills to a group that got torched like a Grand River cou...oh nevermind, that's an old joke, Sparty don't riot like they used to. No one could run on the Spartan D last year and there's an obvious reason: Powerful, athletic players populate the front 7. You want All-Americans? Greg Jones. You want Freshman All-Americans? DT Jerel Worthy. You want solid young players with a mean streak and upside? Linemen Blake Treadwell and Tyler Hoover.

1. Two studs sit primed in the backfield: Edwin Baker and Larry Caper. Who will Dantonio ride as the season wears on? Who can run more effectively beind this relatively young/smallish OL?

2. Cousins' rocket arm gets him in trouble. He's like the guy who has so much charm that he doesn't know when to take it easy with the ladies and ends up with a drink poured on his head. Will he learn to dump the ball downl in key situations instead of forcing deep throws?

3. Can the Spartan secondary, so solid in 2008 and so recordbreakingly bad in 2009, find players who make tackles and play effective one on one coverage?

What a snooze fest of an OOC schedule. Perfect for a 4-0 start, unlike last years challenging CMU/ND/Wisky/UM death march to begin things. Seven home games populate the schedule, which should help with the toss-up games of Wisconsin and Purdue.