If we're going to be completely football focused, the offensive line is the Spartans' biggest weakness or greatest unknown, probably followed closely by the secondary. But if we're to stray off that X's and O's path, I would argue that Michigan State's biggest problem is their lack of identity as a football team. This confusion has manifested itself in the players, the coaches, and the game strategy.

Consider for a moment Coach Mark Dantonio. Upon seeing his grim face and hearing the religious overtones in his conversation, one would expect him to be a coach who tosses problem players as soon as they show themselves to be problems. But this stoic coach who hates bells and whistles is the first to forgive and welcome back people like Glenn Winston. When I attended the Alamo Bowl presser, Dantonio focused less on his disappointment at the suspended 11 players and more on how giving second chances can "save" a young man. Sure, college football coaches have to constantly toe the fine line of father figure and responsible coach, but the odd contrast between Dantonio's two sides has always twisted my brain. 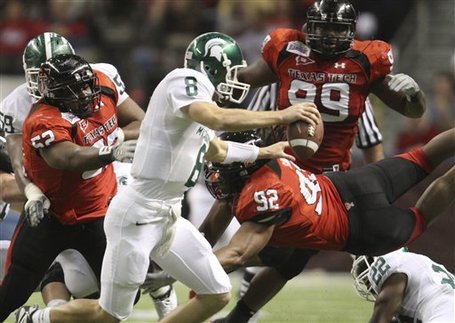 Consider for a moment the Michigan State defense of 2009. The linebackers were freak athletes, tracking down ballcarriers and showing a tough, veteran maturity. How rare to have that depth and leadership all the way across the board. So after Pat Narduzzi and Dantonio realized the secondary was broke, why not turn the LB's loose? Throw in some blitz packages to use your biggest stars more, maybe flood one side with Jones and Gordon. But all we got was the same 4-3 and the LB's sat idly by watching quarterbacks have career days at the expense of the secondary. It's been said that Narduzzi wouldn't add a defensive wrinkle because the secondary members were too beat up and inexperienced to learn something new. I believe that a coach sitting idly by as his defense gives up a record breaking amount of yardage speaks to a lack of player understanding and want to win. And that is confusing from a coaching staff that preaches the value of hard work and determination.

Consider for a moment the leaders at the head of the Michigan State football team. Kirk Cousins is the consummate quarterback leader; his words are positive and looking forward, his intensity is always burning bright. Greg Jones, a superstar on the field and a quiet leader off it, sets an example with his level-headed approach to MLB and his consistant effort from April to September. Graduated soon to be NFLer Blair White was like Cousins 2.0, a tremendously hard working player who told the media he was "pissed" at the players suspended for the Alamo Bowl. With all these key leaders at key positions, it remains a mystery how so many suspensions and criminal penalties flowed from last years team. 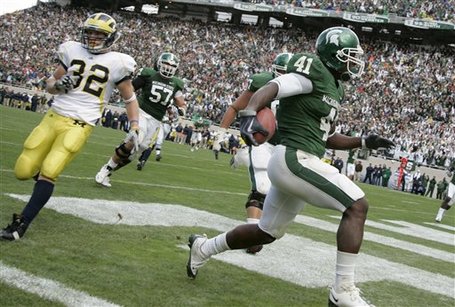 Michigan State is a sleeping giant of a football program. The recruiting pipeline is solid in Michigan, all the way through Cincinnati, and down into Florida. The EL fans tailgate hard, but they show up at Spartan Stadium with a passion. The school has plenty of dough for the football program. But the lack of a "constant," a singular effort and focus toward winning from both coaches and players, has hamstrung the Spartans for years, 2009 being a classic example.