Kirk Cousins is on a mission. I'm just kidding, he's not on a specific mission, but I did always want to use that line; the double entendre referencing his fervent Christianity was too good to pass up. Cousins does posses almost perfect throwing mechanics and extremely strong arm strength, which make him a damn good candidate to lead this high powered Spartan passing attack.

I have a lot of respect for the talents of Cousins, Keshawn Martin, Chuck Gantt, not to mention the offensive mind of Don Treadwell. But two key things will spur this high powered offense in 2010.

When Brian Hoyer was leading the Spartans in 2008, you got the feeling he was playing to not make mistakes. A good example of a classic Hoyer game would be 12-23, 140 yards, 1 TD, 1 pick. But Hoyers graduation opened the doors up for Cousins, the All-American looking Holland boy. (side note: I was just in Heaven, er Holland, the other day and my God. No wonder it was named the 2nd happiest city in America. It's like everyone is having the best day of their life...every day. Pleasantville has nothing on Holland, Michigan.) 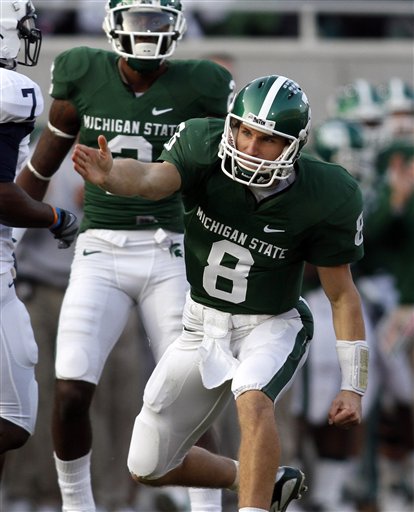 Cousins, whose mechanics we will grade in June, not only has the classic "big arm," but he can make all the throws that Treadwell asks him to. KC found Blair White streaking on the deep post last year many a time and was just as comfortable throwing underneath to BJ Cunningham and Martin on slants and crosses. Add a surprising amount of maneuverability and you've got a franchise signalcaller. Cousins 2009 stats would have been higher than 19 TD's, 223 ypg passing, and a 143 passer rating if Keith Nichol hadn't gobbled up almost 100 snaps.

Backing him up (and according to Spring reports, doing it admirably) is Andrew Maxwell, the four star soph from Midland who didn't even blink when committing to MSU. The Spartans haven't had two gunners like this since..hmm..let me text my Sparty loving newscaster friend...answer coming...2000 with Ryan Van Dyke (there's a name) and Jeff Smoker.

Catch Me If You Can

Every single Spartan expected to catch a ball this year is either a veteran or a freak athlete...or both. What an embarrassment of receiver riches Treadwell has. It begins with Keshawn Martin, who moves like a punt returner, scores on end arounds, and has matured each year at MSU. You can find his gaudy all around stats here, but those lists won't mention how incredibly improved his hands and route running are. But Graham, Keshawn didn't have nearly as many catches as the other receivers last year, why is he singled out? When Mark Dell and B.J. Cunningham were suspended for the Alamo Bowl, Martin worked his ass off to mesh with Cousins and look more like a starting receiver. The difference was obvious during that bowl game and Martin is the starter at the Y receiver spot this Spring. The two other experienced receivers, Mark Dell and B.J. Cunningham, are similar sized receivers who struggled with drops in 2008 but made highlight reel worthy catches in 2009. Together, those three combined for 92 catches worth 1501 yards last year. 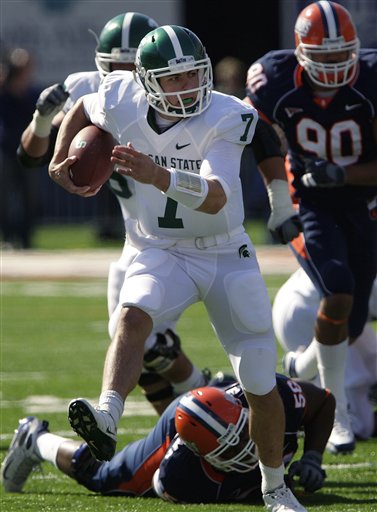 The big surprise has of course been Keith Nichol, last years backup quarterback. Happy with the progress Maxwell had made during the offseason, Dantonio has allowed Nichol to spend 80% of his individual snaps at Blair White's old position, the X receiver spot. Adding 20 lbs of weight will help Nichol take the big hits, but his hands must improve to be as successful as Blair.

The tight ends are far and away the deepest in the Big Ten. Lithicum, the Clemson transfer, is a team leader and an all around solid blocker and receiver. His 20 catches and two touchdowns helped compliment Charlie Gantt, the presumed starter and an Honorable Mention All-Big Ten performer. Gantt had 22 catches last year but he makes his money in the trenches. Some thoughts on Gantt from a Brother Rice High School teammate, Jonathan Gasso:

"Most people don't understand, his draft stock is high because of blocking. Remember when Tim Tebow was filmed pulling tractors in the fields? That's Charlie. He's a meat and potatoes guy, he fights double teams, it's the only way he knows how to play. At the end of practice, his jersey would look like four pigs just rolled with it in the mud."

Backing both of them up is the athletic Dion Sims, a red zone threat who scored three touchdowns last year. Sims was a big time recruit, but Treadwell struggled to utilize him effectively. I would guess he only caught a fraction of balls thrown his way in 2009. 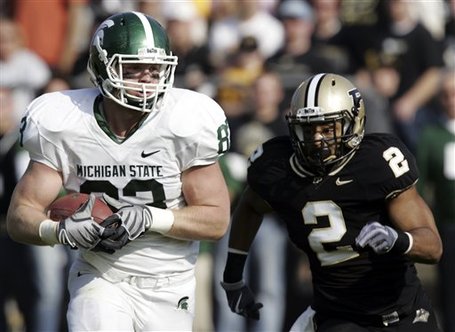 So there you have it folks, the Spartans passing game is driven by a strong armed veteran and a slew of athletic, hard working receivers. If the defense can return to some semblance of it's '08 form and compliment the talented offense, this is a easily a 9-10 win team.