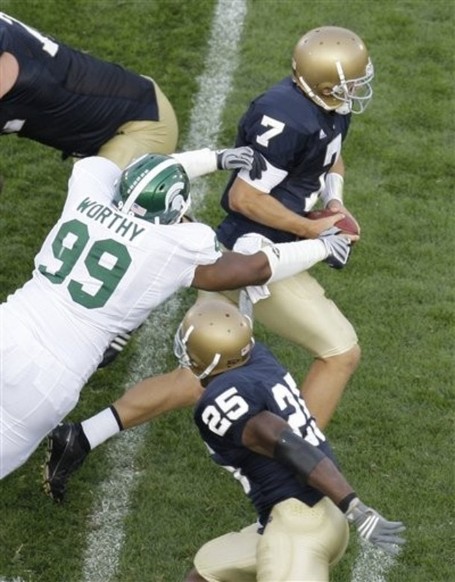 It's no secret that Graham likes 'em young.  Still, I was a bit surprised when I asked him who I should crown as the Spartan's MVP, and he gave me the name of a redshirt sophomore.  Yet, those who know the program best can't help but admire what defensive tackle Jerel Worthy has accomplished in a single season of action.

The 6-3, 292 pound native Ohioan was named one of the best defensive tackles in the nation after his junior year at Wayne High School.  Scout.com praised his impressive speed for his size and "great motor for the game."  Yet, despite being named to SuperPrep's and PrepStar's All-Midwest Teams, Worthy received offers from only two BCS programs: Michigan State and Nebraska.  He picked the Spartans over the Cornhuskers, and red-shirted his freshman season in 2008.

Last year, Worthy started eleven games at defensive tackle, and played in all thirteen games.  He was explosive out of the gate, recording four tackles in his collegiate debut vs. Montana State.  Despite being average size for his position, Worthy's game awareness helps him stand out from his contemporaries.  Worthy appears to "learn" the snap count as games go on -- crashing into the backfield in sync with the ball.  His ability to swim through offensive lines is already the stuff of legends in East Lansing, and reminds me of Ohio State's Cameron Heyward.

Worthy's raw talent and discipline helped him amass 37 tackles in 2009 (9.0 tackles for loss, and 4.5 sacks) -- the second highest of Spartan defensive linemen.  His performance was enough to earn him Big Ten All-Freshman Team and freshman All-American honors.

Spartan fans are eager to see how Worthy grows in between his first and second seasons on the field.  His commanding presence up front should take some pressure off a secondary that sleepwalked through most of last season.