This weakness isn't just a product of a quick-pass spread O, either. NW doesn't abandon the run like one would think, racking up the third most rushing attempts (503) in the Big Ten during 2009. Something doesn't make sense here.

A quick game-by-game analysis of 2009 shows the real issue. The NW front seven, adept at pass blocking and stalling blitzers momentarily, could never sustain a "push" against some talented front seven's. Look at the Syracuse game - a veteran, yet nicked up OL was pushed around by the bowling ball Orange DT's. The result: 52 yards on 28 carries. A lively Michigan State linebacking crew had no trouble tracking down the slow NW running backs as the Wildcats inability to run on first down led to numerous third and longs. The result: 79 yards on 29 carries. Remember that weird Iowa game, where the loss of Stanzi led to stagnation/ball control on both sides of the ball? Northwestern could still only manage a measly 2.65 yards per carry.

The Spread offense is most effective when the draw plays and quick hitting dives can pick up 4 yards every time. Although having a go-to back is by no means imperative, a player like Tyrell Sutton made those quick hitters especially dangerous. Due to injuries and lack of production in 2009, we never learned who the favorite is to carry the rushing load in 2010. Arby Fields was mistake prone like a young back usually is. Scott Concannon is a "two hands on the ball, run like a fullback" player with little giddy up. Stephen Simmons was the de factor starter in Spring Ball 2009, but injuries limited his effectiveness. And then there's this from LTP:

The Spring Game did little to quell concern about the productivity of the ground game. Northwestern's statistical totals were awful - 47 carries for a net of 92 yards. The longest run of the day by a RB was Scott Concannon's 9-yard burst. There is a major caveat. Arby Fields did not play as he is still in baseball mode. However, our cadre of RBs looked like they were in short yardage situations all day muscling out one and two yard gains. Candidly, I wasn't focused on our OL play but across the board, the running game was one of the giant unresolved question marks on this day.

We talked about the vengeful Iowa skill-position-hating God who managed to injure basically anyone who was in the Hawkeye backfield. We haven't discussed the fact that NW hasn't had a healthy lead halfback in years; even Sutton was perpetually hurt. 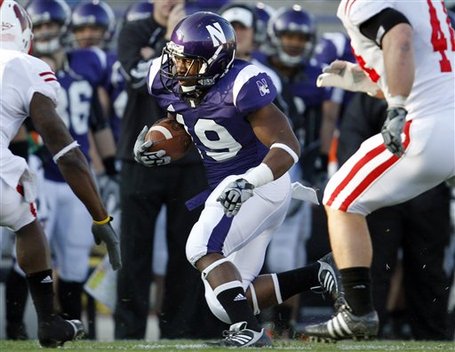 The veteran offensive line, expected to again be a strength in 2010, has never proven its run blocking chops. Averaging only 295 lbs yet sporting a high football IQ, these five returning starters may not have the ability or size to shape running lanes in this version of the Spread.

All NW needs is a complimentary running game, something to confuse the linebackers and force safeties to react to run fakes. Both the O-Line and the RB's have big steps to take before that goal can be accomplished in 2010.