We touched the rock, visited Zingermans in Ann Arbor, and walked the orange and blue streets of Champaign. Time to dissect the Gophers of Minnesota.

FOURTH IN A SERIES: THE MINNESOTA SPRING FIELD GUIDE

Minnesota at a glance...

6 wins and a bowl berth in 2009 and I ask, should that really upset a Minnesota fan? The answer is yes, and Big Ten fans weren't the only ones disappointed with that Gophers team. Big Ten's worst offense? Check. Unstable offensive playcalling? Check. End of the year slump that had TRE calling for Minnesota to tap out of their Insight Bowl matchup so Purdue could play instead? Check. Defection of another OC? Check.

When I mentioned my disappointment with how Minnesota squandered their considerable talent in 2009, the trifecta of Oops Pow Surprise, Bama Hawkeye, and Hawkeye State laughed me off the podcast. C'mon man, they said, Minnesota always squanders their talent, don't be so surprised. So this year, I make a promise to place no expectations on a Minnesota team with a new offensive coordinator and few returning playmakers on either side of the ball.

I tend to believe that three offensive coordinators in four years means one thing. These well-compensated coaches don't believe in whatever Brewster is doing in Minneapolis, so they move on. New OC Jeff Horton, extensively discussed here, is a run-first OC who had great success in Madison but won't have a star RB in 2010. 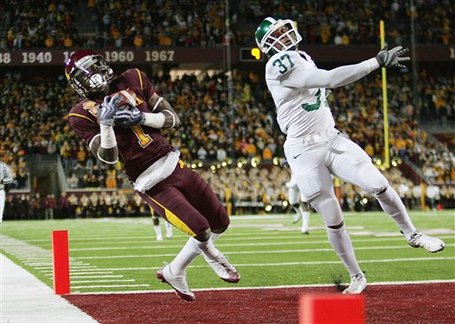 Here a couple other notes to make your Minnesota fandom a bit improved this offseason. Tight End Ra'Shede Hageman has been moved to defensive end; his four star athleticism is probably needed more on defense anyways. DB Kyle Theret has been cited with a low grade DUI and is suspended indefinitely; obviously he'll be back soon.

Vital cogs in the Mini system will need to be replaced. Eric Decker, Lee Campbell, Nate Triplett, Marcus Sherels, both Tow-Arnetts, Traye Simmons...Basically every Gopher who could hurt you in 2009 has departed.

Not good. Not good at all. And if there is anything we've learned from Brewster and his varied offensive coordinators, no one up in the Land of Ten Thousand Lakes can quite develop offensive talent. But don't lose all hope, my Gopher friends and fellow Big Ten fans, there will still be reasons to watch Minnesota this year. Wide receivers Brandon Green and Troy Stoudermire, both blessed with speed and athleticism, took steps to improve their ball catching ability in 2009. Their game breaking ability will be needed badly with Decker departed. I also enjoy watching 375 lb. right tackle Jeff Wilts engulf defensive lineman.

All the leaders are gone from a defensive unit that kept Mini in most games. Brewster must use Spring ball to prepare his new defenders for Big Ten physicality. At least his highly recruited linebacker corps (Keanon Cooper, Spencer Reeves, Gary Tinsley, Sam Maresh) will have the physical tools to assimilate.

1. Who can replace Lee Campbell? He was a killer last year, racking up 100+ tackles and absolutely popping opposing ballcarriers from his MLB position. I reviewed him here and if you're too lazy to read the entire thing, I'll sum it up: LC was Mini's version of Pat Angerer.

2. If Adam Weber struggles early, will MarQueis Gray be given the reigns to this squad? Or will the uneven quarterback substitution patterns of '09 continue?

Last year's OOC schedule was extremely interesting, as the Gophers faced Jahvid Best, Greg Paulus, and the Air Force option. There will be no letdown on the excitement this year, as Matt Barkley and a talented NIU team both roll into Minneapolis early.

The most interesting discussion point lies, of course, in the fact that four of the five toughest matchups are at TCF. It's no stretch to say that we're going to learn if a rowdy October crowd at TCF can inspire the Gophers like the Metrodome failed to.