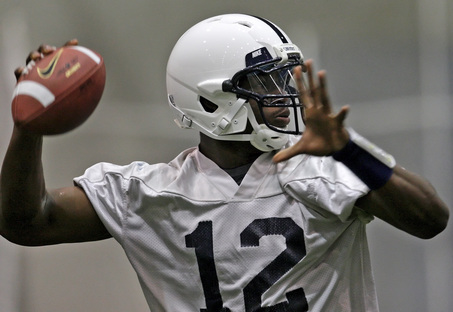 Penn State's biggest mystery going into 2010 is not as simple as "quarterback."  Nor is it the new-look offensive line.  It's a little bit of both:  When Penn State's opponents inevitably begin to crowd the box, will the Nittany Lions be able to effectively deliver the ball through the air?

While Penn State returns a solid set of running backs, an offensive line that figured out how to get some good push towards the end of 2009, and will probably be starting quarterback that has a dangerous set of wheels, just how consistent is the passing game going to be?

Penn State fans have spent a lot of time this offseason pointing towards the 2005 season as evidence that the coaching staff is capable of putting together a successful run-oriented offense.  That year Michael Robinson and a group of freshmen wide receivers did enough in the air to keep Big Ten defenses honest.  But it may have been just enough: Penn State won the conference that year, but they managed to come in tenth in total passing yards in the Big Ten.  It was their second-best rushing game and second-place defense that really carried the team through its schedule. 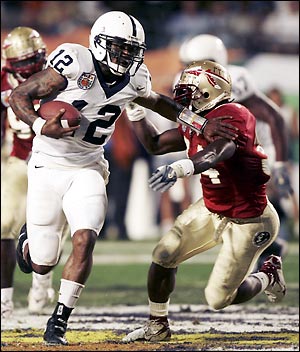 But while Michael Robinson and Kevin Newsome may share similar qualities regarding running abilities, emphasis on may, Newsome will be a true sophomore and first-year starter whereas Robinson was a senior and the entrenched leader on the team.  Some may have predicted him to be a wide receiver in 2005 (in favor of putting 5-star sophomore Anthony Morelli behind center) but the fact is that he was used to having the ball in his hands and had considerable game experience.  Newsome will make rookie mistakes.  To predict anything but a couple heart-rending turnovers in clutch situations would be naive.  While I don't think the Blue/White performance was quite as damning as others have considered it, we still have to hope it was either an outlier or the quarterbacks were otherwise handcuffed by the scrimmage rules.  We don't really know how quarterback is going to shake out.  Unfortunately, what we've observed of Newsome's passing abilities hasn't been terribly inspiring so far. 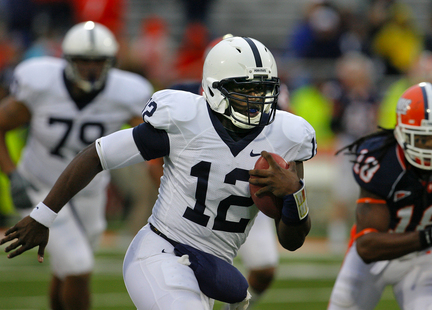 Taken by itself, a green QB wouldn't be fatal to this Penn State squad.  What complicates matters is the offensive line.  I don't think anyone really expected to see the new lineup that the coaches rolled out shortly after spring practice began.  Now fans have to be concerned about the line's ability to gel all over again.  The guys at BSD put it succinctly after the Blue/White Game:  "the left tackle looks like a huge problem" and "the offensive line looked bad in pass protection."  If the new O-line can't give the QB time...things could get ugly. 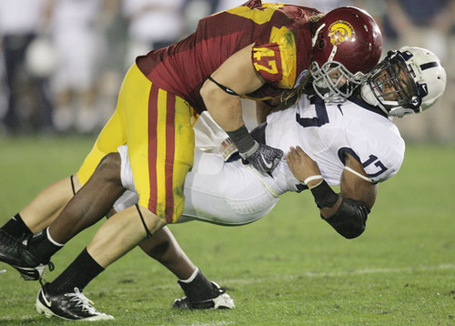 We can be confident that Penn State's running game and defense will be solid in 2010.  The uncertainties at QB and O-Line, however, point towards the passing game as the obvious Achilles Heel.  Penn State looks to face some of the best defenses in the country next season, squads that will be able to grind a one-dimensional ground attack to a halt.  But if the Lions can muster some degree of reliability in the air and avoid costly turnovers, it may just be enough to win some big games.  At this point in time, though, we haven't seen much to convince us that will be the case.