After finishing a very successful QB Mechanics series in Summer of 2009, we attempted to recreate the magic by starting a Running Back Mechanics series. Finding the profiles to be less informative and dynamic as the QB series, we moved on, but not before dissecting the running style of one Evan Royster. The 215 lb. halfback was coming off an extremely impressive sophomore campaign, full of weaving, hard nosed runs. And although his '09 stats weren't spectacular, no thanks to the O-Line, he didn't injure his reputation or his body in 2009. That's why this veteran halfback could be Penn State's MVP in 2010. 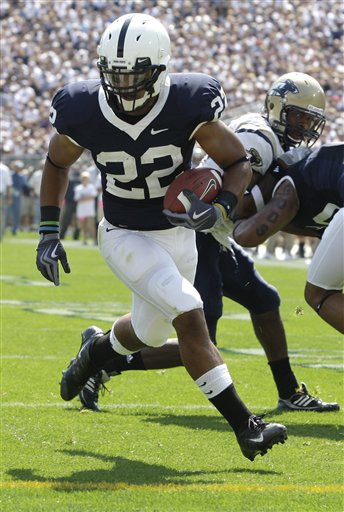 Evan's importance to this year's PSU team could not be higher. With Daryll Clark gone, the Spread HD will naturally be tweaked to its strengths. With a young QB and an O-Line that will be improved, the new strength/focus will be the run game.

But even beyond that obvious piece of analysis (oooo you hand it off to your stud HB to cover up your QB's weaknesses oooo you're a geniusss), Royster's running style and history illustrate how success will flow through his talented legs. He's played every game in the last two years, getting double digit carries in all but three games. All the weaving and twisting have spared Royster's body also. As I mentioned in my mechanics article, he doesn't try and run you over, he tries to get on your side and drag you forward for a few more yards. That's a sign of maturity, no question.

As Paterno Avenue pointed out via email, Royster is primed to bust the PSU all-time rushing yards record. We're going to a lot of the draws and simple off-tackle runs; every opponent knows Royster is "the guy" for this PSU offensive. We'll find out pretty quick if there will be any holes for him to swerve through and pick up positive yardage.

Some discussion points: Was Royster's occasional indecisiveness during 2009 100% a product of the horrendous O-Line? Will Evan work with the backups, pushing them to be game-time ready? Wiill Newsome be able to read coverages and dump down to Royster, his safety valve? Where will Evan be drafted?