In order to win a title - national or conference - there are a lot of soft factors that are required. Some of these can best be described as luck: an upset loss by a contender; a ball bouncing one way or the other; the injury gods deciding not to dress in purple hats two years in a row and smite your best offensive player.  Things like that. 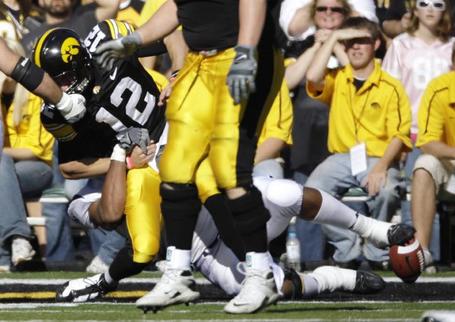 Nope. No facemask penalty there.

But there are other things that need to happen to be a championship team. You have to be prepared to take advantage of the opportunity. That requires a combination of desire, ability, and circumstances. Most schools will have one of those three items. Some have two. But only when the stars align do teams have all three. As we head into the season, it looks like the Hawkeyes have some beautiful constellations above them.

Yes, Iowa won the Orange Bowl last year. It was an 11-2 season that included a magical ride and a Sports Illustrated cover. It was awesome. It also was thisclose to being so much more. You can't tell me that a Senior-laden team doesn't spend time awake at night thinking about another shot at Ohio State with the title on the line. You can't tell me that the team doesn't see 2010 as the chance to make up for the almosts of 2009. Yes, this is the easiest of the three requirements to have in May. Every team wants it. But sometimes, those teams that just missed want it that little bit more.  I saw it in Tuscaloosa as Alabama faced Florida for a second time for the SEC title. In the Big Ten, it would be another title for Ohio State (as it was for Florida last year). It will be the title for Iowa. You can't tell me that doesn't matter.

No, Iowa didn't magically become a roster of 5-Star recruits during the off-season. But, after last year's successes, it is apparent that they can play with anyone in the country. As a reminder, Iowa walked into the Horseshoe with the following players listed as OUT: three of their top four running backs, All-Big Ten guard, starting cornerback, starting safety, and two of their top five wide receivers (including their starting return men). And just to add a degree of difficulty, Iowa lost its starting quarterback the previous week. James Vandenberg, a red-shirt freshman, got to make his first collegiate start in front of 101,000 mean people in red. And with all of that, Iowa took the Buckeyes to overtime. 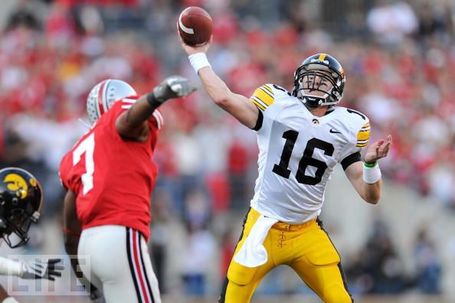 The Hawks have the talent. There are only three areas of concern for the returning squad. 1) The offensive line; 2) The linebackers; 3) Right cornerback. While the offensive line concern is legitimate, the defensive spots have experienced backups who have played well when they've had the opportunity. If the offensive line gels, Iowa has all of the ability they'll need to win the league. Even if Luke Halstad did leave the team.

It's hard to call these things luck, because it's more than that. But these are the positive factors that give fan bases hope and prognosticators belief .

It's too early to be too confident.  A lot can go wrong for any squad, even one that seems like it should be further away from the razor's edge than it was last year. But as you look in the black sky, you might notice that the stars are gold. That has to count as another good omen, no?