Oh hell, let's get into it. Three selections from Mini, NW, and PSU writers.

And THAT is where the pleasantries cease.

When it's bowl season in the Big Ten the Iowa Hawkeyes are the only team that I cannot bring myself to cheer for.  I want Big Ten teams to crush everyone they play during bowl season because I sincerely believe that the Big Ten can be the most superior conference in all of college football.

But I absolutely cannot stomach cheering for the Hawkeyes because I can't stand the thought of their fans experiencing that level of joy.

The thing about Hawkeye fans is that they are passionate about their team, and I certainly don't begrudge them that.  But they are the rudest, drunkest, most classless group of fans that I have ever come across.  The words "good sportsmanship" do not apply to Hawkeye fans. 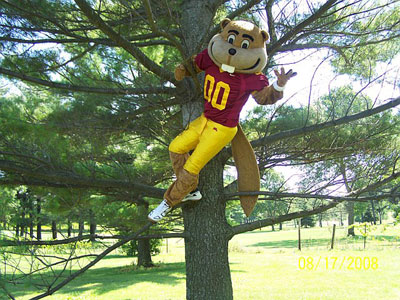 [Bama Hawkeye with a little known Minnesota fact: Goldy was chosen as the Minnesota mascot due to the disproportionate number of citizens in the state with an unsightly overbite.]

And the fact of the matter is, my attitude about this isn't just coming from a bitter Gopher fan (which I'll admit that I am).  My feelings are representative, I believe, of every fan base in the Big Ten and around the country for that matter.  Fans of several schools have expressed this same feeling.  I have specifically heard similar feelings from fans of Northwestern, Illinois, Wisconsin, Michigan and Penn State.

Cyclone fans obviously have the in-state rivalry thing going on, but even the Hawkeyes tax-paying in-state neighbors catch their classless nature.

A couple of quotes from a CycloneFanatic.com thread titled: "Dumb question... is Iowa game in IC (Iowa City) fun?:

"When you hear people from other schools saying how classless Iowa fans are, it is a recognition that has been well earned."

"...a 40 year old man threw his full beer cup at me on the sidewalk from his car while yelling GO HAWKS."

"Of course the beer throwing and minor vandalizing of your vehicle could be the least of your worries..."

On a personal note I have had beer thrown on me by Iowa fans at Kinnick, I have had an empty beer bottle thrown at my camper (which was painted Gopher colors) outside of the Metrodome, I have been physically pushed by Iowa fans and I have seen an Iowa fan in his 20's screaming obscenities in the face of a 70 or so year old Gopher fan who was sitting quietly in his seat with his family.

And before you tell me that the actions of one bad apple can ruin the reputation for an entire fan base, in the case of that last incident, there were no less than a dozen or more other Iowa fans around the 20-something yelling at the old man, and every single one of them was laughing and/or egging him on.

Perhaps the worst part about the classless actions of Iowa football fans is the fact that they seem to not only look the other way when it happens, not only condone it, but they actually seem to encourage this type of behavior.

Age does not matter.  I have seen people in their 20's, 50's, and even small children egged on by adults who have screamed venom at Gopher fans, and not even one time have I seen another Iowa fan discourage it.

Ribbing and trash talking and banter... it's all good stuff, and it's fun.  It should be fun for both sides and at the end of the day we should be able to share love of Big Ten football, a laugh, and a cold one.  But there's no sportsman ship in an Iowa fan that would allow him to end the day with anything mutual.

Look, fans aside, I've got no issue with Iowa's football program or the state of Iowa.  Cyclone fans, for instance, have given me plenty of crap leading up to and since last December's Insight Bowl against the Gophers.  But at the end of the day they weren't vicious and they acted like human beings.

Acting like human beings is more than I can say for every interaction that I've ever had with Iowa football fans.

Hate... Iowa? Hmm. No. Dislike? Okay, I guess. Really, though I think the word I'd go for would be amused. Yes. Iowa amuses me. Or, more precisely, its fans do. (Though, frankly, the state is shaped funny... it's kind of what I imagine a narcoleptic's attempt to draw a parallelogram would look like...) Uh, er, anyway. The Iowa fans amuse me because of how worked up they get every time Northwestern beats them. Oh I know I know.... they like to call us "just Northwestern" as a way of emphasizing our supposed inferiority. But, if we really were so insignificant, why is it that they get so up in arms over the losses? It all just makes me giggle.

It was one of the very few times I can think of that a last-second field goal delivered defeat to a team I am a fan of.  And while fans are powerless to directly influence the outcome of a game regardless, there is something about the...inevitability, maybe?...that accompanies the last couple minutes of a game like that that is especially painful.  The fact that our national title run dreams evaporated as the ball went through the uprights...yes, Iowa, you have my hate. 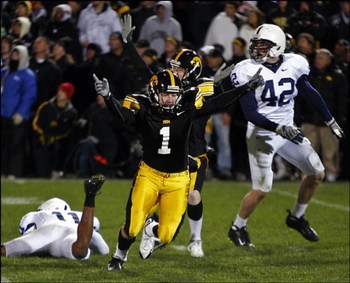 Bama Hawkeye asks, "Does it ever get old?" No, it never gets old.

Adding insult to injury was the seeming joy that the mainstream media took in Penn State's loss to the Hawkeyes.  Pundits had been flipping out over the idea of an undefeated team from such a 'weak conference' getting into the MNC game.  Elimination of that possibility thrilled writers such as Pat Forde of ESPN.com, who went so far as to say that Iowa had done Penn State a favor.