It's been a rewarding two and a half months, but it's finally time to come home to the grassy banks of the Olentangy.  Columbus, Ohio marks our final Big Ten 2010 team destination.  For the next five days we'll dissect the defending league champions then next week -- as an encore -- we'll do general league predictions and superlatives.  Thanks to everyone for making the series a detailed and thought-provoking exercise.

ELEVENTH IN A SERIES: THE OHIO STATE SPRING FIELD GUIDE

Scarlet at a glance...

There are few -- if any -- teams in the country that are shouldering greater expectations heading into 2010.  Sure, folks in Boise are pretty amped about what promises to be the highest preseason ranking for a non-automatic qualifying conference squad in the history of the BCS.  And Tuscaloosa is teaming with talk of a repeat.  But push come to shove, Ohio State, and its notoriously demanding fanbase is sine qua non.  Boise State fans know that they could well drop a game out of the gate when they travel to FedEx field to play a Top 10 Virginia Tech team.  Alabama fans likewise understand how hard it is to win back-to-back titles, even with a Heisman-trophy winner on deck.  (They did spoil Tim Tebow and Florida's chances at a repeat in 2009, after all).  Ohio State fans are a different breed.  (I'm not saying that's a good thing). 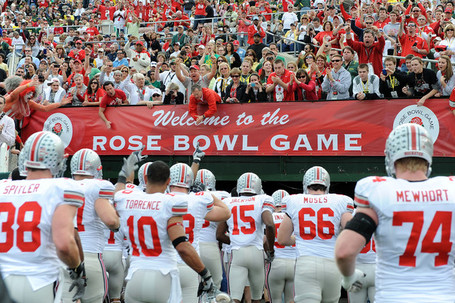 Still, it's hard to blame people in Columbus for believing the hype.  The Buckeyes did, after all, shut down the nation's most gratuitous offense on New Years Day in The Granddaddy of 'Em All.  In the process, Terrelle Pryor put on a show performing like, well, everyone thought he would from day one.  If a parade in Pasadena and Pryor's MVP weren't enough, Jim Tressel's 2008 recruiting class, which ranked fourth nationally and included the aforementioned Pryor, J.B. Shugarts, Michael Brewster, DeVier Posey, and Mike Adams, is all grown up.

The Buckeyes got a big break in January when Cameron Heyward,  Chimdi Chekwa, and Ross Homan passed on NFL dollars to don the scarlet and grey for their senior seasons.  Heyward's presence on campus is a welcome tonic for a transitioning defensive line, and helped to soften the sting of a (comparably) underwhelming showing on National Signing Day.

There's a strange feeling in Columbus that if Ohio State is going to claim another national championship under Jim Tressel's watch that this is the year.

Then again, we've heard that before.

A lot has been made about the production Ohio State returns on the offensive side of the ball.  It's true that minus Jim Cordle and Jake Ballard the entire offense returns.  Still, before we start gushing about what dreams may come, let's recall that this is the same unit that struggled dramatically for over half of 2009.  These are the same players that couldn't muster more than a touchdown against USC, despite starting almost every drive in the second half in Trojan territory.  This is the same group that got outscored by the defense and special teams in a deceiving two touchdown victory over Wisconsin.  These guys managed just 66 rushing yards and turned the ball over 5 times against Purdue.

That's not to take away from the impressive manner in which Pryor and his supporting cast righted the ship.  In the final six games of 2009, the Buckeyes ran downhill, defeating three Top 15 teams in the process.  An offensive line that had looked anemic, was suddenly a battering ram.  Pryor's footwork and command of complex coverages turned a corner.  An offense that Oregon Defensive Coordinator Nick Aloitti thought they "should have been able to hold to about 13 points," racked up 419 total yards -- 266 through the air. 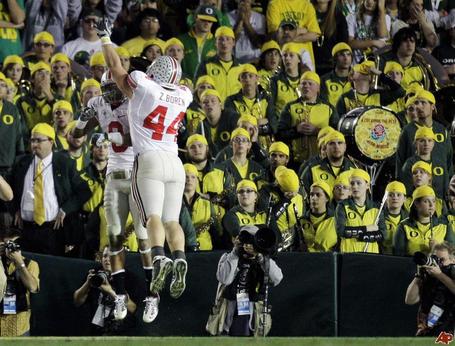 The only thing worse than Oregon's offense was the band uniforms.

Is Jim Tressel finally ready to give his kids the keys to the Viper?  It's a strong possibility.  The Buckeyes could run the Preakness with the stable they've got in the backfield.  Like a paint by numbers collage of draws and sweeps, Ohio State appears to have a player for every need.  The power and elusiveness of Dan Herron is complimented by Brandon Saine's speed, and Pryor's dangerous ability to eat up chunks of yardage on the edge.  Herron and Saine are backed up by a laundry list of four and five star talent.  Wide receiver DeVier Posey is clearly Pryor's top target, but Dane Sanzenbacher is a solid all-purpose option, and Taurian Washington is relishing his No. 3 status (spurred by Duron Carter's academic troubles).

Spring practice showed that fullback Zach Boren is truly a human bowling ball, and Tressel finally appears ready to use tight ends for more than just blocking.  Jack Stoneburner is Pryor's new found niche over the middle.  His spring game performance showed his ability to get up and bring down the football. 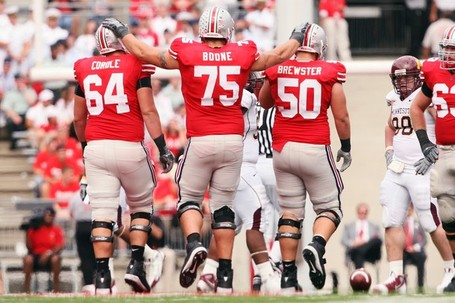 Still, the reality is that Ohio State's success in 2010 depends entirely on whether the offensive line comes to play.  If the unit continues to build off its production down the stretch in 2009, Jim Bollman may have his best group up front in half a decade.  Justin Boren is a kitten killer, while Mike Adams -- a much hyped recruit who has so far failed to excel at the college level -- seems to finally be getting his sea legs.

On defense, the Buckeyes lose important depth on the line rotation, and at safety.  Still, "The top two tackle leaders return in Ross Homan (108 tackles) and Brian Rolle (94). Bullish DE Cameron Heyward is an All-America candidate after leading the defense with 6.5 sacks last year and both starting corners (Chimdi Chekwa and Devon Torrence) return."

Although Jermale Hines and Orhian Johnson will be tested, the only thing this defense really lacks is a ready supply of fresh legs.  If Cameron Heyward is truly ready to play every down, Jim Heycock's guys will give plenty of offenses fits.

1. Will Terrelle Pryor be a complete quarterback from start to finish in 2010?

2. Will Ohio State finally turn out a disruptive offensive line?

3. Can a dangerous but thin defense get through the Big Ten without injury?

4. Can Ohio State beat Michigan for a record seventh time in a row?

Ohio State faces one of its more challenging Big Ten schedules in half a decade.  Both Wisconsin and Iowa -- legitimate Top 15 teams -- are on the road.  For the second year in a row, the Buckeyes will finish the season with games against Penn State, Iowa, and Michigan.  Having a bye week before the final stretch can't hurt.

Also, a dangerous Miami team will visit the Horseshoe with thoughts of avenging the program's loss to Ohio State in the 2002 National Championship Game.  If good Jacory Harris shows up, the Hurricanes should give a transitioning secondary a serious test.