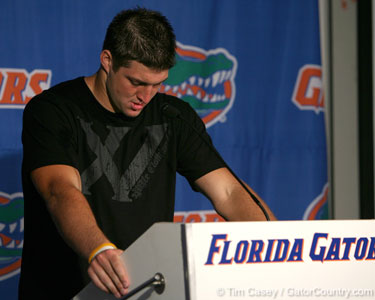 Tebow promised and delivered.  Can Pryor?

If a synopsis of your team's weaknesses reads like the following, you're in damn good shape:

I'm a little wary of the annual post-Spring game hype re: the OSU passing game. Many people said TPryor had made huge strides in his throwing last year before we started playing games. Then we played USC and, well, you know. I'm a huge TPryor fan but let's not get too carried away until we see him throwing in a real game. And other posters are right: we have some other issues to resolve right now like the absent special teams play. We have no return game, no known quantity at punter or kicker. Those are big probs. Plus, what carried us last year, the D-line From the Gods, is not the same deal. Let's get that stuff nailed down before we get misty-eyed over our other "weapons"

Yeah. Weaknesses don't abound in Columbus, which makes for an offseason of playing the "which pollster will put OSU at #1 or #2" drinking game. It's quite simple - find an offseason poll or prediction that fulfills that criteria...and drink.

Dammit Bama, I have to work tomorrow!

As Law Buck stated in yesterday's post, "There's a strange feeling in Columbus that if Ohio State is going to claim another national championship under Jim Tressel's watch that this is the year."

And here's where my discussion begins. The last five national champs have either 1) had some tremendous chip on their shoulder or 2) battled through some mid-season adversity to claim a BCS championship. 2009 champ Alabama played angry, obviously not forgetting the back to back bitch slaps from Florida and Utah during the '08 season. 2008 Florida featured Angry Tebow and the Incredible Promise. 2007 LSU was a TWO LOSS titlist who backed its way into the title game, only to mangle the Buckeyes. 2006 Florida was an underdog to OSU. 2005 Texas was the dragon slayer that killed the booster funded USC beast seeking back to back titles. 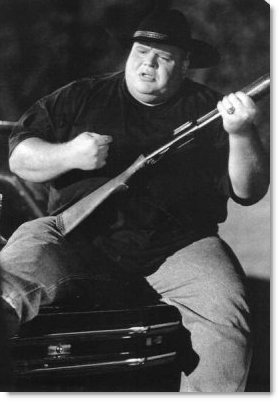 When faced with tremendous pressure to win, Billy Bob lost it a little. Will OSU suffer the same fate?

2010 OSU will, presumably, be improved on both sides save for the D-Line. The schedule is more than manageable. The Bucks will be favored each week and Penn State, who plays OSU tougher than anyone else in the conference, has to travel to the Shoe in November. More important than both of those things? It seems like Tressel is learning how to harness Terrelle Pryor effectively in the passing game.

Last year brought titles, bowl game wins, accolades, and preseason hype. There's little inspirational anger to be gleamed from such a successful campaign. Sure, they're biased, but 11 Warriors thinks OSU has the Big Ten's best quarterback, best wide receivers, and second best backfield...And that's on a team whose defense is the stronger unit 100% of the time.

So yap during the offseason about how Ohio State doesn't have a long range field goal kicker, wring your hands over whether Chekwa will make strides this offseason, discuss whether the Pryor hype machine is all fluff...When you're not only expected to win every week, but expected to win the whole thing, most of the worry should be placed squarely on the mental side of the ball. How will OSU react when Wisconsin is pounding John Clay up the middle and all those returning Badger starters are rared up to upset a top 5 Buckeye team? How will Pryor react when he floats a couple of throws and the bad mechanics begin to return? How will Tressel push his players beyond the "we're talented and we play hard" mantra and into a "win at all costs" mentality?