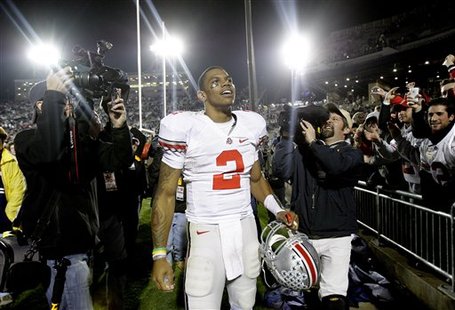 When I think MVP, I picture the player who contributes the most to a team's overall competitiveness.  Not just an individual who performs on key downs, but one whose gifts exponentially elevate a team's energy.  To put it another way, I ask what player's season-ending injury would hurt a team and its fanbase the most.  For Ohio State the answer is obvious.  Take away Terrelle Pryor and the Buckeye's national championship hopes go the way of the Titanic.  Prozac starts flying on the shelves of Columbus-area CVS stores.  Jim Bollman's offense becomes flatter than a Kansas highway.

Sure, there's still an armada of running backs, a powerful line, and standout talent at the skill positions, but take away Ohio State's main offensive ingredient and the dough just won't rise.  Kenny Guiton earned his No. 2 status on the depth chart, but a good performance on a soggy April afternoon in a glorified practice isn't indicative of taking snaps in Madison or Iowa City.  And if you think Jim Tressel is going to let a redshirt freshmen take chances, put that Prozac back and pick up some Abilify.  Let's face it, without Pryor all that talent at the skill positions goes to waste as a Jim Tressel hell bent on limiting mistakes sews the offense up tighter than a Victorian corset.  Opponents load up in the box to stop the run, and the rest is USC circa 2009 history.

To be honest, I could end the article at this point because TP's importance to Ohio State is obvious.  To borrow a fancy Latin phrase from the law, res ipsa loquitur -- the thing speaks for itself.  Still, there's a bigger, better question I want to tackle and that's the question of why.  Why do we love Pryor like we do?

While researching this post I came across a recent after-practice interview of Pryor in the BuckeyeXtra online section of The Columbus Dispatch.  A reporter asked the quarterback about Tim Tebow's infamous reinvention of his throwing motion for the pros, and whether he would have to make similar adjustments down the road.  Without skipping a beat, Pryor reminded the reporter that (paraphrased) "We run a pro offense," before declaring that "When it's time for me to go to the NFL, I'll be ready." 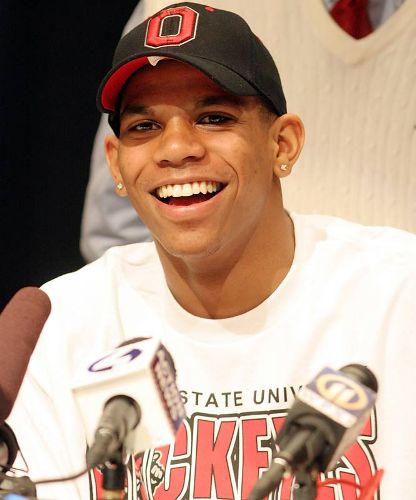 Even the most diehard Buckeye fan gets a bit squeamish when they think of Pryor at the next level.  The majority of fans respect Pryor's raw physical gifts, but still think he lacks the pocket presence, accuracy, and vision of a "real" quarterback.  I'd be willing to bet that many of you reading this think of TP as an athlete, and not a signal caller.

That's quite a discrepancy between a guy who believes he's bound for the League, and the spectators who think he doesn't have what it takes.  I don't blame Pryor for having an unintentional hubris.  We treated the kid like the Sultan of Brunei during an extended recruiting courtship, and adjusted our expectations to match the hype surrounding his debut.  We gave him a standing ovation the first time he ran on the field for crying out loud, as a true freshman.

Before he set foot on campus Pryor promised to help Tressel with his championship "problem," so I guess it's only fitting that before he wins a championship he practically promises to be an NFL Hall of Famer.

Still, he's got a long way to go to meet either of his goals.  A part of me says that despite his "growing pains," Pryor's development is right on schedule -- and it's our unrealistic expectations that created the unrest that was last October.  The other part says that even with Rose Bowl MVP honors, Pryor is still an incomplete quarterback.  A guy whose physical gifts are ahead of his time, but whose fundamentals are shaky at best, and flawed at worst. 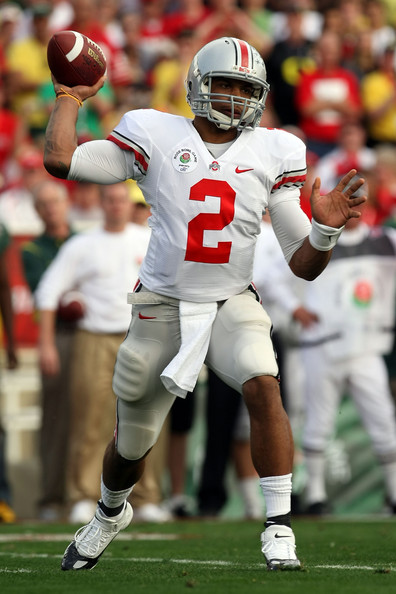 Was this the turning point?

Which brings me back to my original question.  Why do we love Pryor like we do?

It's not because of his arm, his legs, his leadership, or even his attitude.  It's because deep down we all believe that we still haven't seen anything yet.  And when we do...