Besmirched reputation in tow, where does Rich Rodriguez go now?

Share All sharing options for: Besmirched reputation in tow, where does Rich Rodriguez go now?

You learn a lot about power struggles and sports memes through the answers to these questions:

Who started the dialogue? Who fired the first salvo?

When someone enters an accusation or controversial story into the public arena, there is an agenda at play. Whether it's to expose some wrongdoing or carry out some kind of vendetta, it's that initial attack that strikes most powerfully. Why is it so powerful? Because, dammit, whether the issue is a real one, whether the wrongdoing exists, there was an attack. New ideas were pushed into the subconscious. Someone went on the offensive. 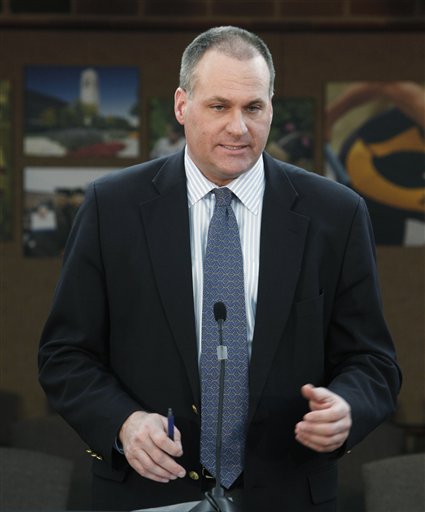 That's a good point to start with the Rich Rodriguez / University of Michigan controversy that has been "resolved" in the past few days. Freep allegations be damned. Shockingly harmless results be damned. Probable minor punishment be damned. Tepid reaction from NCAA and Freep be damned. Someone started a conversation that has labeled Rich Rodriguez as an undisciplined cheater, a liar, a bad coach.

So where does that conversation go now?

You're free to not give a damn about Rich Rodriguez. And you have a right to claim that Michigan winning football games takes care of this. Please also use this opportunity to shred Rodriguez for not being politically savvy enough to get away with violations like other coaches.

But there is more at work here. How do Michigan and Rodriguez erase the "common knowledge" about Rich's practices and personality? Jon Chait wrote this in his brilliant article following the Rodriguez press conference:

To read the original Free Press report alongside the university's report is to compare two pictures that bear almost no relation to each other. The Free Press painted a horrific portrait of a football program obliterating any semblance of limits on practice time. The paper reported that "the Wolverines were expected to spend two to three times more than the eight hours allowed for required workouts each week." It further alleged, "Players spent at least nine hours on football activities on Sundays after games last fall. NCAA rules mandate a daily 4-hour limit." And it further portrayed this alleged epidemic of rule-flouting as the product of Rich Rodriguez's obsession with conditioning, and the near-mania of his prized assistant Mike Barwis - a natural conclusion from the article's anonymous sourcing from players and parents of players disgruntled with the new coaching regime. The Free Press article breaking the allegations is entitled, "A look inside Rodriguez's rigorous program."

The events of today and yesterday were, by and by, horribly uninteresting. But that didn't stop everyone from discussing the original accusations, not to mention the "stained" Rich Rodriguez (h/t to Rittenberg for condensing these, it's much appreciated):

Colleague Mark Schlabach: "For a coach who seems to be on a hot seat, [Rich] Rodriguez is getting plenty of support from his boss..."

SI.com's Stewart Mandel: "Ultimately, Michigan's punishment fits the crime, which was never an overly egregious one. Michigan fans' greatest concern was never whether the NCAA would 'drop the hammer' on their program; it was the additional stain now associated with the already embattled Rodriguez..."

The Detroit Free Press' Mitch Albom: "If Michigan's self-imposed sanctions are accepted by the NCAA, then how will the program change? A few less practice hours? A few less quality-control people?"

The Detroit News' Bob Wojnowski: "This is the thin Blue line Michigan now walks, and it's about the same width as the thin line Rodriguez walks..."

Annarbor.com's Dave Birkett: "Rodriguez, clearly, was the big winner Tuesday, though his 89-page personal response read part caged animal, part blame-shifter. In his defense, he was fighting for possibly his coaching life, and had the documents to back up his claims."

Here's what I know. The Michigan players love Rodriguez and trust him. The Michigan administration is behind Rodriguez, as are most supporters. The documents released support Rodriguez's side of the story. But I just saw the terms "program change", "hot seat", "stain", and "caged animal" within five articles. When this issue ends with the NCAA lightly slapping UM's wrist in August, those phrases will still be seared into the memory of fans and supporters. We'll soon find out how much winning is needed to be an effective salve. We'll also find out if the Freep-created "dialogue" about Rich is ever able to be shaken off.