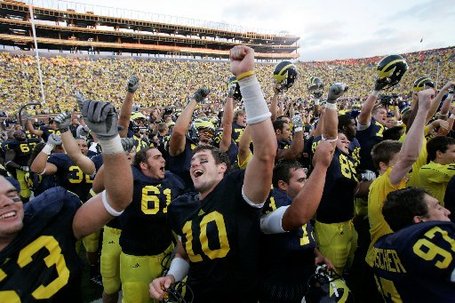 You were ranked No. 8.  They were a Rich Rodriguez coached Michigan team.  How this happened, I will never know.

In the past, we've tried to use this space to highlight actual, tangible shortcomings, rather than paint broad characterizations with subjective brushstrokes.  This morning we're going to take things in a slightly different direction.  That's because on the surface, a team that returns 18 starters from last year's 10-win group, including one of the Big Ten's best play-action passers (Scott Tolzien), most prolific rushers (John Clay), and dangerous safeties (Jay Valai)  doesn't have many glaring weaknesses.  (If pressed, I'd probably point to the defensive tackle position).

Not to worry.  Wisconsin suffers from a much larger psychological affliction.  A decade long curse of pre-season expectations that haunts the halls of the McClain Athletic Center.  The greater the hype surrounding spring practice, the more certain the fall, it seems.  Just look at the Badger's track record:

Perhaps I should have titled this piece "three is the tragic number."  That's because Wisconsin has a strange tendency to drop games in bunches.  In 2002 they lost to Penn State, then Indiana, then Ohio State, and went on to lose to Iowa, Illinois, and Michigan.  In 2003, they lost to Purdue, Northwestern, and Minnesota.  In 2004 Wisky finished the season with a trio of losses to Michigan State, Iowa, and Georgia.

How could I forget Wisconsin's four game fall from grace in 2008, when the 8th ranked Badgers spent an entire month on the rag, losing to Michigan, Ohio State, Penn State, and Iowa?

The numbers don't lie: When it comes to pre-season expectations, Wisconsin is all talk, and no walk.

That's bad news in Madison this spring, as one source already has the Badgers in the preseason Top 10.