No Rivalry readers, I have not gone off the deep end quite yet. Though, honestly by the time I finish these law school finals tomorrow I might in fact find myself there. So what's with the reference to the mythological three headed dog? Well as much as I wish Wisconsin had one of those prowling its backfield, I'm actually referring to Wisconsin's greatest strength coming into this season - it's trio of running backs: John Clay, Zach Brown, and Montee Ball.

Oh I know... naming the running game as Wisconsin's greatest strength is about as cliche and predictable as one can get. But it's predictable because it's true. Wisconsin has, seemingly always, recruited and trained a certain type of back best suited for a bruising and physical ground game. There's nothing new about that.

And yes, that old familiar strength has returned once again for the upcoming season. Between its three backs, last year Wisconsin had 2,187 yards and 25 TDs. If those numbers don't give you chills as a Badger fan then I don't know what will. 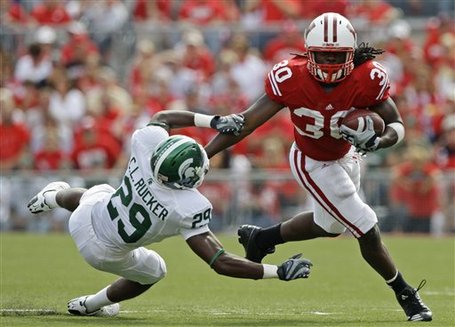 Now, I should be clear, I am not advocating for a running back by committee approach. John Clay, he of first team all Big Ten honors, is our main back. Indeed, watching that system between John Clay and Zach Brown last season proved incredibly frustrating for me. This was mostly due to Zach Brown's sudden inability to hold onto a football, and Bielema's continued insistence on using him over John Clay. Brown was later sidelined by a concussion which forced him out of two games and reduced his playing time in others. This rather effectively eliminated the running back choice problem.... until John Clay was bent in half by an... angry Iowa linebacker. That's where Montee Ball came in. Originally a non-entity on the Badger squad, Ball stepped up admirably against Indiana after this event and showed that Wisconsin did not have to fear even the (temporary) loss of Mr. Clay. 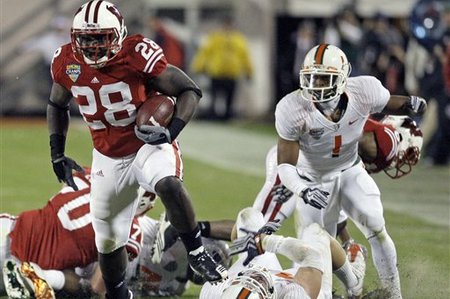 The time line of last season shows why, then, having three running backs will be the greatest asset to Wisconsin this season. Not much more needs to be said about John Clay, who is rapidly making a case for the title of "Heir to the Great Dayne," but Zach Brown (assuming he is cured of his butterfingers) has a different skill set all together, which helps to trip up opposing defenses. Montee Ball is sort of like a mini John Clay, but as shown in the later games of this season and the Champs Sports Bowl, opposing teams don't often plan for him, and they can get steamrolled when they only focus on John Clay. If Brett Bielema can make effective use of these three in combination with Scott Tolzien's passing game, the Wisconsin offense will be a terrifying sight this season....