Such a fun article to write. Watt, a former junior hockey player, skated through numerous offensive lines last year and looks to garner even more hype this year with the departure of All-Big Ten pass rusher O'Brien Schofield. This increased media attention is sure to come thanks to four reasons:

1) He's physically ready to play in the NFL. The man is 6'6'' and bordering on 290 lbs - that's prototype stuff for defensive ends. Last year's dominant 2nd half of the season showed that he has retained agility even while adding 50 lbs onto his frame. When I google JJ, all I see listed is "Defensive End" but does anyone know if he played DT at all in 2009? It wouldn't be a stretch is he did. 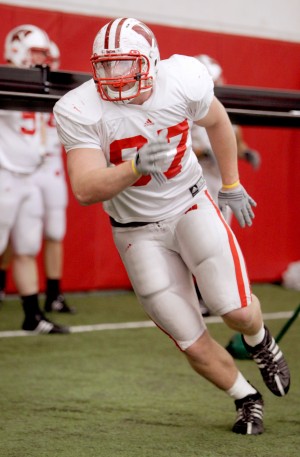 2) J.J. is fundamentally sound and active on the field. Swim move? He's got a great one. Ability to "smash down" away from the ball? Damn right. Here are some direct quotes:

"Job one for me is to disrupt," he (J.J.) said. "I want to absolutely demolish anyone in front of me, hopefully knock off a couple more blockers so other guys can make tackles."

"You can tell (Watt) is playing on a healthy leg," Partridge said. "His fundamentals keep getting better. He comes in every day, 'Coach, what do I need to focus on today?' You've got a good chance with guys who have that kind of focus."

Calling Watt a "high motor" player is so stereotypical, so I will change the analysis a bit. When J.J. gets into piles, he tends to thrash around quite effectively, looking to slow a ballcarrier or take up a couple blockers. He doesn't mind being the guy on the bottom of a pile that stopped a runner for two yards.

3) J.J. has an intriguing back story. He was a lightly recruited 2 star out of Wisky who took a scholarship to Central Mich, forty five minutes from my house, but really far from his beloved home state Badgers. Recognized for his athleticism and told he would be a ball catching TE, JJ learned the offensive from Dan LeFevour and became the starting TE as a frosh. Unable to accept a limited role in the O (only 8 catches) and unwilling to move to the offensive line, J.J. left CMU and walked on to Wisconsin's football team. Happier close to home, the man impressed the hell out of everyone while on scout team and fluidly moved into the starting lineup in 2009.

4) There is an MTV show called College Life...or something. J.J. Watt made an appearance as the love interest of the girl Andrea...or someone. J.J. is her rebound guy from some schmoe she dated for a long time...I guess. She gushed about him: "J.J. is so sweet and he pays attention to me and he drove his moped all the way over here." While this foray into reality TV does nothing for the article, hats off to J.J. for putting his mack down in front of millions. You can see it all here.

Without Schofield lining up on the other side, Watt will face double teams all year, and for good reason. This 2009 Honorable Mention All-Big Ten selection is a force to be reckoned with, both on the field and in the dating game. Boom!