Share All sharing options for: Big Ten 2010 // Keeping the Enemy Close - Where We Learn the Difference Between Minnesota and Wisconsin Fans

It's that time again. Your cubicle reeks of the onion rings you forgot to throw away from Thursday's lunch, your to-do list is stretching into the weekend, and Tom from one desk over has already left for his beach house...and you hate Tom. Never fear, our own Minnesota writer Jeremy has come to your rescue with some extensive remarks on the Minnesota-Wisconsin football rivalry. I must say - Jeremy's description of "typical" fans is frankly sublime and worth the read.

The rest of the Midwest groups Minnesota and Wisconsin together nicely: Beer, freezing weather, cheese, weird Canadian accents, etc. What is the biggest difference between your typical Wisconsin fan and your typical Minnesota fan?

Let's get one thing strait: the cheese thing?  That is ALL about Wisconsin.  I love cheese as much as the next guy, and maybe even a little bit more, but when someone says Cheesehead... they just aren't talking about someone from Minnesota... it's just a fact. 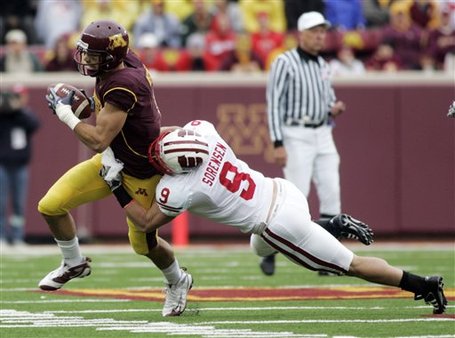 Now the beer, freezing weather, weird accents, okay, I'll give you that.  So when it comes to football what makes us different?

Let's define typical.  College kids are mostly the same: drunk, stumbling, loud, and overly excited when they hear a mind-numbing techno beat come over the stadium speakers (ed note: Cascada?!! I LOVE Cascada!!), so we can't compare them.  It would be redundant.  Let's say, for the sake of the argument, the "typical fan" that we're talking about here is in their late 40's, a lifelong resident of said state, a lifelong fan of the school, middle class, and a season ticket holder.

The "typical" Wisconsin fan pounds Old Milwaukee's before the game, take pulls off of a bottle of Windsor in the tailgating lot, stumbles to the stadium, hurls obscenities at the opposing fans before the game and during the first quarter, begins to sober up in the second quarter, by the end of the halftime they are befriending the people they were slurring obscenities at, and by the end of the game their telling you that even though your team sucks, you played a good game.

The "typical" Minnesota fan sips on a few Summit Extra Pale Ale's before the game, possibly passes around a glass of Knob Creek in the tailgating lot, walks quietly to the stadium, stews silently when seeing opposing fans, during the second quarter wishes he had gotten more drunk before the game, by the end of halftime they are still stewing silently at the sight of opposing fans, and by the end of the game are thinking about the cooler in the tailgating lot that still has plenty of booze in it.

How in God's name can Minnesota beat the stacked and hungry Badgers this year?

"It's a rivalry game... anything can happen."

Just kidding.  The fact is that Tim Brewster hasn't been able to figure Bielema out yet, and the answer to how the Gophers can beat Wisky this year is really in his hands.  If the team begins to do the small things better, doesn't turn over the ball, plays physical, and can neutralize the battle at the line of scrimmage, they can beat Wisconsin.  Unfortunately, the formula that I just described isn't something that Wisconsin needs to learn to do... they've been doing it since the Alvarez days, and nobody does it better year in and year out.  In order to beat Wisconsin you have to find a way to beat them at their own game.  The alternative is swinging for the fences early and often, which almost never works. 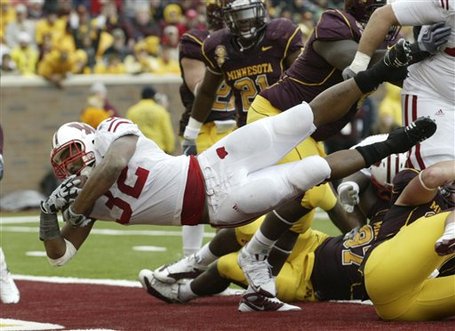 Many Gopher fans are probably going to disown me for this, and vehemently disagree with me, but I don't hate, or even really dislike Wisconsin fans.  The truth is that the typical Wisconsin fan is my favorite type of football fan.  They love their team.  They get blitzed before the game.  They want to hate you, but they just don't have it in them.  They'd rather have you join their tailgate and enjoy some good-natured back and forth ribbing, then honestly crush your will to live.  (When you ask me this question in a couple of weeks about a team that resides to our south, you will get a VERY different answer.)

And because of the people, I cannot hate the state of Wisconsin either.  The state of Wisconsin has many things that I envy... The Harley Davidson Museum, Miller Brewery, Leinenkugel's Brewery, Miller Park, Alpine Valley Music Theatre, and most importantly, their liquor stores are open on Sunday

How does it feel to lose 6 in a row to your rivals, not to mention the last three in heart breaking fashion?

How does it feel to lose 6 in a row to your rivals?  Well Graham, I could ask you the same question... you're a Michigan fan aren't you? (ed note: thanks.ass.) 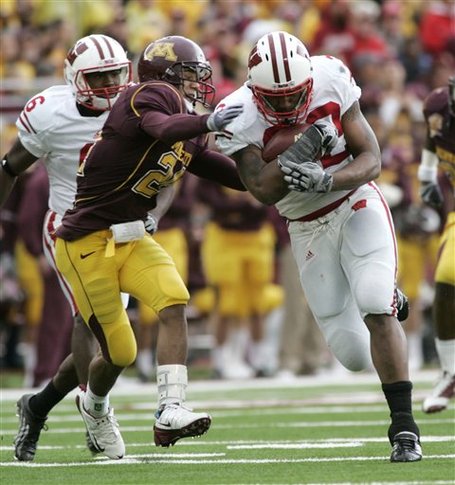 Honestly, it sucks, I hate it, and it literally has sometimes kept me up at night.  I honestly don't understand why Minnesota can't become the kind of program that Wisconsin is, and so, on a yearly basis for the past 6 years, I have to be reminded of this.

The thing about the Minnesota/Wisconsin rivalry is that it just has so much history.  We're talking about 12 decades of border battles that started with two teams playing for a Slab of Bacon... I mean what's more romantic than THAT!  It's BACON for F sake!!!  It's the oldest rivalry in major college football and as a fan of either team you can't help but get caught up in the history and the meaning behind it all.

And that's why losing that game is such a stomach punch.

Look, when it comes right down to it, I have to defer to Russ Mantooth when it comes to Wisconsin football:  "From deep down in my stomach, with every inch of me, I pure, strait, HATE you.  But damnit do I respect you."