NINTH IN A SERIES: THE PENN STATE SPRING FIELD GUIDE

Has Penn State crossed the threshold and become one of the few programs that can say they "reload" and compete for a BCS game every year?  Or is the program a step or two away, needing to accept "rebuilding" for a year or two after every conference-title-run season?  The 2009 season was a step in the right direction, but it will probably be 2010 that Nittany Lion fans (and their rivals) will point to as dispositive evidence in the "rebuild-or-reload" debate.

Penn State at a glance... 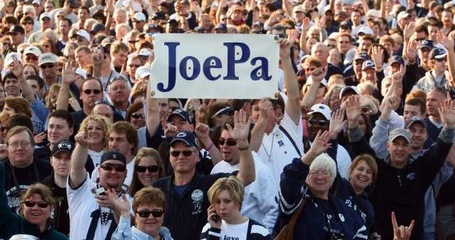 The span from 2005-2008 was your typical Penn State "rebuilding" pattern:  A conference title season, two years of 9-4 records with a fair share of heartbreaking, turnover-filled losses, and then another conference title when the stars aligned/offensive line was experienced at the same time.

2009 was, in that sense, a relief.  No inexplicable losses to lesser-talented teams.  The Iowa loss stung, but at least that Iowa team was a tough squad which matched up really well against Penn State, and ended the season with a convincing win in the Orange Bowl over the ACC champion.  A more talented Ohio State team came in and, in the words of Coach Joe, "punched us in the mouth" as Ohio State is likely to do to Penn State in its "rebuilding" years.  Fortunately the season ended on a high note, with a win over a top-15 SEC team down in their backyard (something Ohio State is not likely to do).

Jabs at conference rivals notwithstanding, I think 2010 is a very big year for Penn State fans.  No one really has aspirations of outright conference titles, but on the other hand if this team loses 4 games the shit is going to hit the fan (on the internet).  Jay Paterno needs to show the fans that he can prepare a young-but-talented quarterback for the big show.  The staff also has to figure out what to do on the offensive line and demonstrate improvement on special teams.  Questions on offense mean that the traditionally solid defense cannot regress if we want to win some big games.  And winning big games should not be written off in the Spring.

What happened this offseason?  The best news is that Penn State pulled in one of the best recruiting hauls in the country, and all three major outlets tabbed theirs as the best in the Big Ten.  Second, cross your fingers, we haven't had any big injuries (yet).  More troubling, and a much bigger story, has been the quarterback competition.  I agree with Mike at BSD that it's not as dire as the MSM and blogs have made it out to be, but it's dominated PSU's offseason as far as headlines go.

2010 will be an important year for Penn State, and in my opinion it will be an exciting one.  I'm being uncharacteristically optimistic about the season, but I think it's going to be a lot of fun to see how a new QB fits in with a pretty experienced offense and to see to what degree the defense is able to reload the linebacking corps. and line.  We'll be an underdog against our big three opponents, all away, but if we can play solid football and some things go our way, it's not impossible that this year could offer one of Penn State's biggest wins in a while. 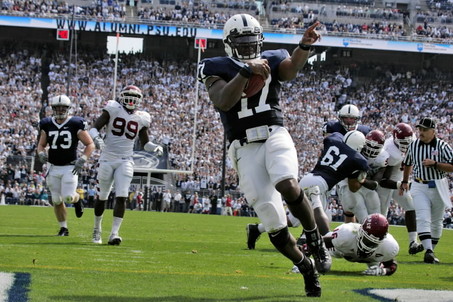 On offense, a line that seemed to finally come together and really got some push against LSU mostly comes back.  Losing LT Dennis Landolt, now trying out with the New York Football Giants, looks to be problematic.  Left tackle is a major concern at this point in time.  Moreover, the coaching staff completely jumbled the positions at the end of spring practice.  Most notably, the Blue-White Game saw last year's center Stefen Wisnewski switched to his more natural guard position.  Will these changes stick for the fall?  Once a lineup is solidified, will they pick up where they left off last season?  These questions don't get asked as often and as loud as those regarding the quarterback, but I think they have just as much to do with our success next year.  Penn State is deep at running back and wide receiver and there should be no issues there.  Evan Royster returns for a final year, and barring complete disaster will take his place as Penn State's all-time career rushing leader by the time the season has ended.  He'll pass some true legends on his way, which should be a lot of fun to watch.  Moreover, his backups in Stephon Green, Curtis Dukes, and Silas Redd all look very capable if they need to take on a more prominent role.  Wide receiver also doesn't miss anyone from last year.  Derek Moye and Graham Zug are back to lead the crew, and young guys like Justin Brown and Curtis Drake should take on more responsibilities. 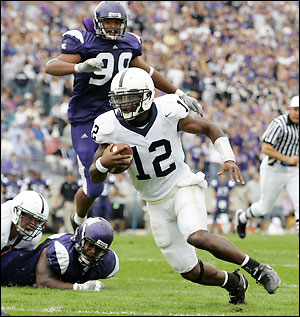 Oh yeah, and quarterback.  Following the Blue-White Game I commented to my girlfriend that the sky was falling on the internet.  She responded with: "It's April.  You are insane."  Noted.  If you're reading this, that means you've already ready enough on this subject to write your own blog post.  My 2 cents: Kevin Newsome is the guy, he's going to make some mistakes, he's going to make some great plays with his legs, and all-in-all he's going to be "OK."  My experience is that you can more-or-less completely disregard the Blue-White Game, so that is not some kind of bad taste that I'm keeping in my mouth over the summer.  We'll see what happens. 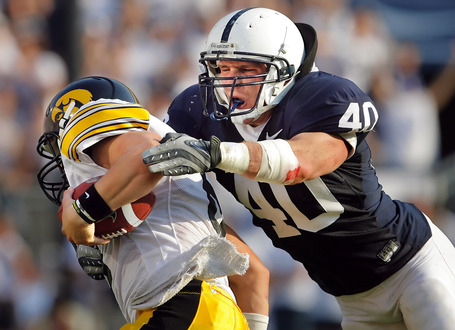 Defense should be the team's strength.  Larry Johnson, Sr. has shown us that he can make superstar first-round draft picks over the summer before.  I don't know if we'll have one next year but I'm not losing sleep over the defensive line.  The backfield mostly returns, and contains a lot of young guys that should only be better this year.  Chaz Powell, a wide receiver last year, has returned to provide depth at the position he was originally recruited at.  All three of 2009's starting linebackers were drafted a few weeks ago.  I would imagine this could cause some consternation among a fanbase, but I don't think you will fnd too many Linebacker U fans losing sleep over this position either.  Michael Mauti just may be the next great Great White Man-Eating Linebacker, and there is a lot of talent competing for the starting spots: Stupar, Yancich, Colasanti, Gbadyu, and Hodges are some of the names you may hear over the course of next season, but it's anyone's guess exactly what the starting lineup will be in Tuscaloosa.

3. Will Penn State be able to come out of the their "big three" games (@ Alabama, @Ohio State, @ Iowa) with any wins?

4. Will the team be able to get a solid offensive line in place?  How much time and help is the new quarterback going to have?

5. Will the traditionally-solid defensive line and linebacker units be able to reload?