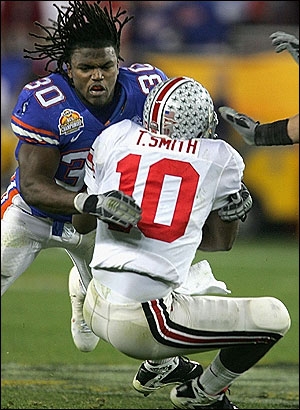 Yesterday we talked superlatives, now it's time to get critical.  It shouldn't be a surprise that when it comes to picking on the Big Ten, there's plenty of fodder.  In fact, no conference in America is as widely dismissed as this Midwestern juggernaut.  For four straight years the Big Ten has been the butt of the BCS.  Yet despite the nation's scorn, the league continues to be the richest and most influential in the sport.

So let's hear it

What is the Big Ten's Greatest Weakness?

Even as we forge ahead into the second decade of the 2000's, the Big Ten's greatest weakness is unchanged: perception.

As a conference the Big Ten is still perceived as a one dimensional, traditional, stuffy, slow, physical entity that is unwilling to change.  For those of us who are fans of this conference, we like it just fine that way, thank you very much. But for the rest of the country the Big Ten seems set in its ways.

While every other conference in the country becomes more and more inundated with west coast, spread, and spread-coast offenses, the Big Ten continues to find success with the formula that has driven us for years: off-tackle right, off-tackle left, three yards and a cloud of dust. 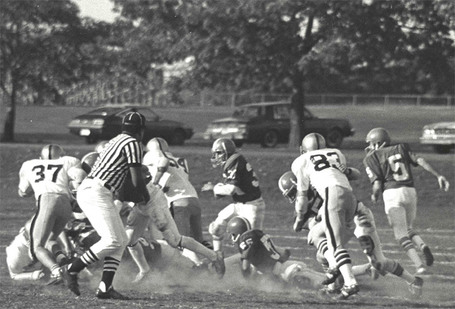 The way the rest of the country sees us.

And even when the spread has tried to rear its head into the Big Ten, it hasn't found much success (Minnesota, Michigan, and glimpses at Ohio State), and the reason for that is because despite changes on the offensive side of the ball, the formula for defensive domination hasn't changed a bit: big, physical linemen, backed by quick and physical LB's and DB's.

The Big Ten ended last year's Bowl Season on a remarkable high. There is a real risk that after the non-conference portion of the schedule is completed, people may be claiming that is was nothing but the luck of facing overrated Oregon, Georgia Tech, LSU, and Miami teams. That's right. All of the good press that came from the strong bowl season can quickly be undone with a bad non-conference showing. To start, let's be clear: the Big Ten is not playing a murderer's row of opponents. Most teams have only one game against a BCS team. That's what makes each so important. 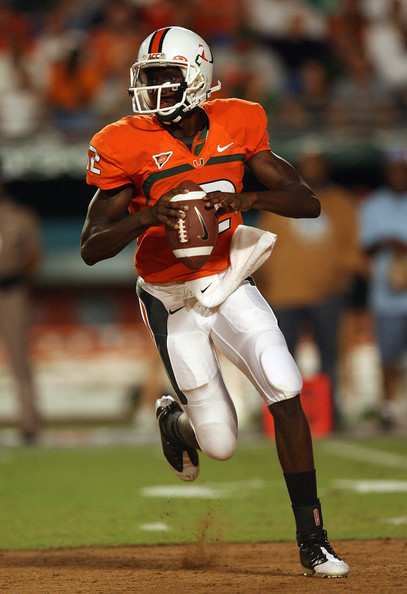 Jacory Harris would love to keep the Big Ten in the woods.

Now, there will be no criticism if/when Penn State loses at preseason #1 Alabama. Likewise, everyone expects Minnesota to lose when they host USC. But if Iowa loses at Arizona (and Pac-10 road games have been a disaster for the league the past 10 years), Miami wins in Columbus, or Arizona State wins at Madison, there will be big rumblings. If Notre Dame wins against Purdue, Michigan, and Michigan State (three of the four mid-level teams in the Big Ten in 2010) to start the season, there will be scoffs. If Northwestern drops its opener at Vanderbilt, there will be chants of SECSpeed. And if Michigan also drops its home opener against a UConn team (even though it may be the best team in the Big East), it will be ugly. We'd all like to think that the league turned a corner in January. But this slate could show us that it hasn't gotten out of this dark alley yet.

The numbers don't lie.  For a conference that's clearly Top 2 in the hierarchy of the sport, we're still coming out of a competitive recession.  Ask a casual fan with short term memory and the pall that's hovered over the Midwest since the 2006 BCS National Championship is a permanent geographic reality.  After all, past results are perfect indicators of future performance.  Right?  Okay, so maybe college football is cyclical.  But there's still that climate problem.  Athletes like warm weather.  The Big Ten is so a tundra.  This stodgy old league can't keep up, can it? 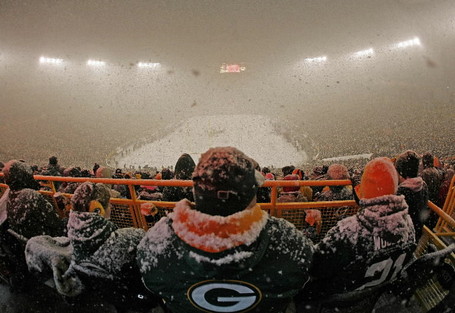 I hope none of those "fair weather" Floridians were planning on making it to the next level.

Look, I'm tired of debating the whole "End of Days" scenario.  No reasonable spectator can make a straight faced argument that the power pendulum isn't going to swing back North like it's been doing for the past 114 years.  Do you honestly expect me to believe that the pecking order in a sport that's more volatile than the stock market is suddenly, immutably fixed?  That the last century of chaos has merely been a epic game of musical chairs and on January 7th, 2006 the music stopped, and the Southeastern Conference -- with its mythical speed -- snagged the seat at the head of the table.

The way I see it the only thing this league is really suffering from is a lack of star power.

In 2009, the Big 12 had Colt McCoy and Sam Bradford (albeit temporarily), the SEC had Tim Tebow and Mark Ingram.  These are national figures who consistently performed under pressure.  In the Big Ten, our greatest celebrities were signal callers who frequently made bad decisions (Ricky Stanzi, Terrelle Pryor), running backs who never really broke into the national consciousness (John Clay, Evan Royster), and defensive linemen who played for sub 500 programs (Brandon Graham, Ryan Kerrigan).  Although some might point to the recent drop off in premiere cru talent in Rust Belt recruiting, I think the real problem is we're still a league full of makeshift attacks.  Let's face it: offense sells.  Until one or two Big Ten programs become offensive powder kegs, the league will continue to suffer from its plodding perception.

Then again, isn't it defense that's supposed to win championships?