It's called the June Swoon. You're tired, you're grouchy, and there ain't no CFB to remedy your sport boredom. This year that June Swoon isn't so pronounced. A new team will call the Big Ten its home, thus setting hearts aflame with talk of new rivalries, conference championships, and the fountains of money cascading out of Jim Delaney's ass.

I guess we can step away from Exparmageddeon 2010 for long enough to look at the prom king, the belle of the ball, the pretty boys of football...the quarterback. Last year we graded the mechanics of each Big 10 signalcaller, a process that gave us some intriguing results and helped us go beyond "Player A threw for ___ yards and __ TD."

We called Dustin Sherer the worst thrower in the Big Ten because of his horrendously long delivery. Bret Bielema took our analysis to heart and went with the formerly unknown Scott Tolzien, who turned out to be a tremendous upgrade. We called out Mike Kafka for his loose, disjointed delivery. A ton of offseason work showed in 2009 - he looked like a strong armed QB who was in control, instead of an athlete who just happened to play quarterback.

We're grading on a different curve this year, so please don't compare the grades from '09 with this year's marks. In '09, we graded from the perspective of "these guys are D1 quarterbacks, even the bad throwers should get C's." This year we'll take a more skeptical eye, grade wise. Someone like Adam Weber, whose body and eyes were off kilter all of 2009, will probably end up around a C-, while last year we pushed him into the B range. 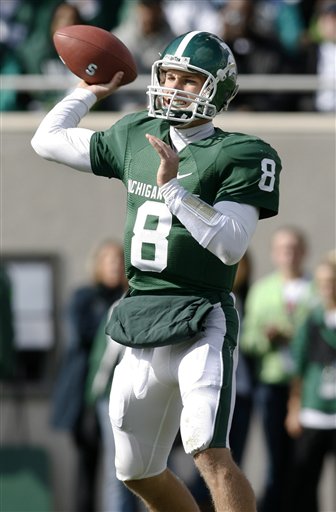 So onto 2010. First up, the Christian Reform boy from Holland, Michigan with the heart of religious gold and the laser arm...Michigan State's Kirk Cousins. This accurate thrower easily took the starting job from former Sooner Keith Nichol and never relinquished it. His 19-9 TD to INT ratio, while excellent, should have been a lot better as the Spartan line gave him lots of time in the pocket. But his sophomoric tendencies failed him in big games, leading to ugly picks.

Tall, but solidly built, much is expected from this 2009 Honorable Mention All-Big Ten quarterback. Let's see how his delivery looked in 2009.

How the Offense Affects Mechanics (A):