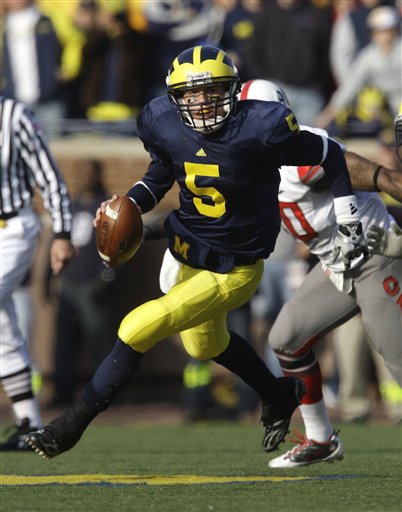 Everyone agrees that Tate Forcier is not fast enough to run the RichRod Spread to its maximum efficiency. Let me rephrase that - everyone agrees that Forcier will never run the RR Spread like Pat White did. But I believe that great players make great plays. So it's true - Little Man Tate fits better in a Texas Spread than a RichRod Spread. But maybe with the 15 lbs he gained this season, Tate can play effective, injury free ball at a high level. OR maybe Denard Robinson will take over the starting job eventually.

So take what we see here with a grain of salt. He's bigger, he'll be healthier (at least for the first few games), and someone is sure to tell him to please, Tate, keep the ball closer to your body. Please. Do it for the kids.

(This was a joint collaboration between Greg and I. Enjoy.)

How the Offense Affects Mechanics (C-):