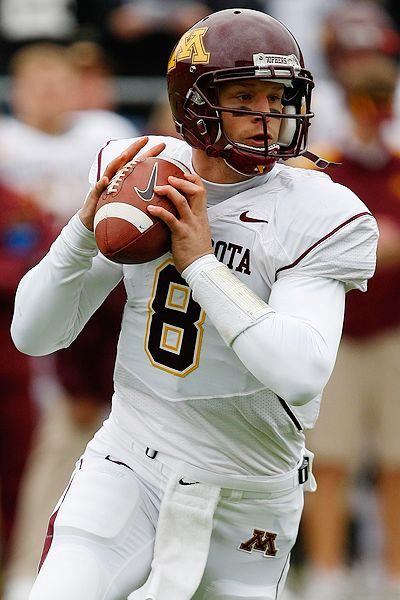 I'm not the biggest Adam Weber fan in the land of 10,000 lakes.  I want the guy to be successful, but he has made me want to poke my eyeballs out more than I care to remember.

But the fact with Adam Weber is that he has the potential to be a very good quarterback if he's put in the right situation.  The unfortunate thing for him, and Gopher fans, is that he hasn't been put into that situation yet.

I tend toward an emotional response on these types of matters when it comes to my favorite squad, but today I intend to look at Weber with a more objective view as we continue our series looking at the mechanics of the signal callers  in the Big Ten.

·         Security/Ball Placement (A-): Prior to ’09 Weber worked almost exclusively out of the shotgun, and while he was under center more in ’09, he still was more comfortable standing up.  He takes the snap well and protects the ball well, holding it to the numbers prepared for a quick release.

·         Retreat Speed (A-): Pretty quick pulling away from center and gets to his drop point quickly.  Does a good job of keeping the field in front of him when he isn’t faking play-action.

·         Footwork (B): Very sure footed on the snap, but tends to look jumpy, especially when pressure is coming, which mostly manifests itself in the feet.

·         The Fake (C): Mechanics of his fake are a bit dramatic, but generally good.  Unfortunately the fake is not very effective for the Gophers, which can’t necessarily be blamed on Weber. (see How the Offense Affects Mechanics)

·         Adaptation (C): Seems to be a bit more comfortable, and often more accurate, moving outside of the pocket.  Has more of a tendency to check down his throwing options when he’s on the move.  If the pocket remains he tends to key on his primary receiver and gets into trouble when the primary isn’t open.

·         Survey (D): Again, does not check down his options well and tends to key on one receiver. This is easily my biggest gripe with Weber and has been for 3 years.  He just doesn’t give himself enough options on throws to be successful. He has a huge tendency to key on his primary target and force the ball into a tight spot which often leads to high, inaccurate throws, that can get his receivers in trouble, get the balls batted into the air, or intercepted.

·         Stance (A): Very upright and tall.  Has a good command of the pocket and can sense when things are breaking down.  Holds the ball in good position for a quick release.

·         Wrist/Throw (B+):  Has a bit of a ¾ delivery, not quite a sidearm.  Has quick and powerful throws in short distance and can really get some "stank" on the ball from a good snap of the wrist.

How the Offense Affects Mechanics (C):
The offense that Jedd Fisch had Adam Weber running just wasn’t suited to Weber.  It was too complicated, gave him too many options, and many times forced him to make throws that he just wasn’t comfortable with. Nothing about Fisch’s offense lent itself to making Adam Weber a success.

Because the Gopher running game was nothing short of abysmal in 2009, the play-action fake was completely ineffective, and I would argue that even perfect mechanics on the fake wouldn’t have made this a top rated area for Weber.

Weber is a good athlete with very good tools when they are used correctly, but he does a better job leading the offense when he gets to lead with his athleticism, and not his head.  This really isn’t a knock on Weber, but the truth is that when he’s been the most successful has been when he has been given the freedom to move around and the freedom to tuck-and-run if needed.

Graham wanted me to mention a few things that his slightly more technical eye has noticed...

PROMISE ME you will mention his inability to make a simple out throw because he doesn't trust his arm and body. Promise me.

Promise me you will mention his inability to be effective under pressure and the times he blindly heaves balls when HIS ENTIRE HEAD TURNS AWAY FROM WHERE HE'S THROWING IT TOO.