Can the Spread Offense Have Long Term Success in the Big Ten?

Share All sharing options for: Can the Spread Offense Have Long Term Success in the Big Ten? 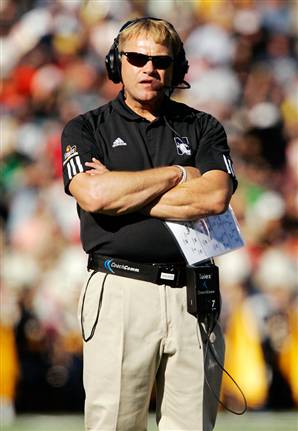 The late Randy Walker pioneered the spread offense both in the Big Ten and across the nation.

This is a question I have been pondering for awhile, but I have to admit to a couple of things. First, what do we define as 'The Spread Offense'? Is it a team with an athletic quarterback who can make plays with his feet? Is it the true spread that Rich Rodriguez ran so successfully at West Virginia, and Urban Meyer has run at Utah and Florida? Or is it something in between, like the hybrid spread Ohio State has run with Troy Smith and now Terrelle Pryor? I also am struggling to define what I mean by 'long term success'. Do we define it by conference championships or bowl appearances? Or do we view 'long term success' as bringing a team to a level of competitiveness that they normally might not get to if they didn't have an equalizer, like Northwestern, or Illinois in 2008? So, here we go.

First of all, what is the Spread Offense? The original version is the 'Run and Shoot' offense (or 'Chuck and Duck--thx buddy Ryan) made famous by the Houston Oilers in the 1980's. It has three, four, or five receivers, no tight end, and a running back, and is used by no one in the Big Ten. The spread option, which is what is most prevalent in college football, and our conference, is the one that I plan to use as my working definition, courtesy of Wikipedia:

Essentially a hybrid of the traditionally pass-oriented spread offense, the spread option is based on the concept of defensive isolation. The offense "spreads" the defense by aligning in three-to-five receiver sets, using two or fewer running backs in the backfield and often setting the quarterback in shotgun. This "spread" forces the defense to defend more of the field and isolates its players in "space". To exploit this, the offense employs double or triple option plays which further mitigates the athleticism of the defense and forces it to play their assignments. When used in combination with a consistent passing game, the spread option offense can yield strong results.

According to ESPN, these are the teams that use the spread as their base offense (more than 75% of the time) in the Big Ten:

And according to this article from the mlive.com website, the spread is used by everyone in the Big Ten, to some degree, except Wisconsin...and Nebraska. The Nebraska information was added by me, but all other information below is from mlive.com article:

Wisconsin -- Multiple one- and two-back set

Nebraska--Currently does not run the spread. It is theorized that they do not have an offense, but Arizona would respectfully disagree. 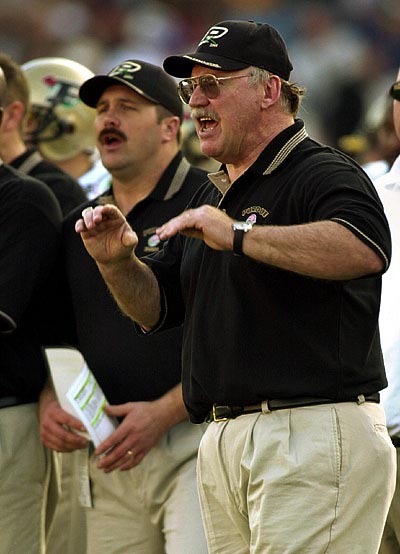 Joe Tiller made it to the Rose Bowl playing basketball on grass.

So the spread, or some version of it, is used by almost every team in the Big Ten, and half use it more than 75% of the time. One of the main characteristics of the spread is a quarterback that can execute the run-pass option. It is also characterized by faster and quicker offensive linemen. But to get faster and quicker linemen, they must sacrifice size. The spread relies on running the ball, but there is a lot more deception and misdirection. For that, offensive linemen need to be more athletic, as they tend to pull more, and the quarterback rolls out more, at least generally. When the weather turns in late October, you had better be able to man up and run the ball, and the Big Ten will always be that way. Teams like Ohio State, Wisconsin, Michigan State, and Penn State have the ability to line up in a two tight end formation set, hand the ball to a massive running back, and run between the tackles. Huge, massive tackles...and guards...and centers. That is the exact opposite of the spread offense, and requires a completely different set of personnel, both on offense and defense. 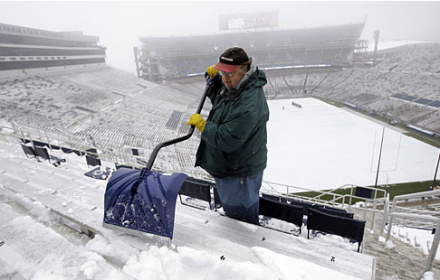 Could this have something to do with it?

Has it been successful in the Big Ten? Yeah, it has. You can't argue with the turnaround Purdue and Northwestern have had by going to the Spread offense. Illinois made it to the Rose Bowl a couple of years ago, and even Indiana went to a bowl game under using the spread offense. Penn State had success long before they went to their Spread HD, but you can argue that their turnaround in the last few years was due to the spread.

Has it transformed the conference, like the spread has in other areas of the country? No, it hasn't. Like I mentioned, the Big Ten still has to contend with the weather, and in bad weather you must be able to run the ball. Because of that, Big Ten teams were slow to adopt the spread, and when we went up against it, we got thumped, and the low point was 2006-2007. But as Big Ten teams incorporated some aspects of a spread offense into their playbook, the Big Ten defenses got better at defending it. Like all offensive innovations, defenses eventually catch up, and we saw that last season, with Iowa, Ohio State, Wisconsin, and Penn State throttling offenses that run some variant of a spread offense.

The spread definitely has a place in the Big Ten, as it can help give a schematic advantage to an undermanned team, but as a pure offense that can carry a team to multiple conference championships, I don't think it can.

But that's just me.