An Intro to TRE's Big Ten Stadiums Series - The Oldest, The Biggest

Share All sharing options for: An Intro to TRE's Big Ten Stadiums Series - The Oldest, The Biggest

Sure, they may just be brick and mortar, steel and aluminum, but the stadiums where our Big Ten teams perform have taken on lives of their own. Or they're Ryan Field. Kidding, kidding...Sort of.

Well then help us out with this series. Post some pictures of your latest game-day experience or write a stadium specific article for The Rivalry. Send me an email at grahamfiller10@gmail.com if you're interested.

Thanks to the plethora of talented writers we have on TRE, we're going to go stadium by stadium, discussing the student sections, the history, the game atmosphere, and anything in between. 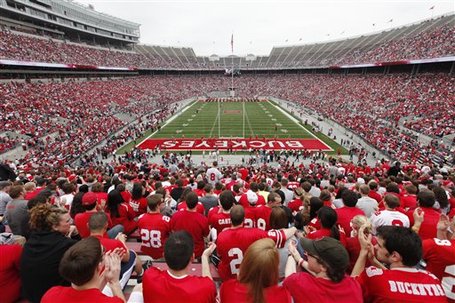 Opening Salvo: Does the Big Ten boast the greatest forums for watching live football in America?

Mid conversation, LawBuck made the comment that not only did the Big Ten have the largest stadiums in College Football, but that these stadiums had the most history and architectural panache. Although I'll let LawBuck write a nice brick-and-mortar piece, here are some well known historical facts and numbers:

1938 - Average year when the Big Ten stadiums were built. Eight of the structures were built before 1930. Although I didn't find any proof, I can't imagine any conference besides the Ivy League having that kind of age-old arenas. Older isn't better, you say, just ask the people who have to relieve themselves in the 80 year old bathrooms which smell like 80 year old bathrooms...or the administrators who have to pay for structural readjustments. But you can't put a price on tradition.

1917 - The year Camp Randall was finished, making it the dean of Big Ten stadiums. Camp Randall Stadium was built on the spot of Camp Randall, a Civil War training field. I'm not sure if any other stadium in America boasts that background, but it's possible.

108,00+ - Capacity of the Big House after renovations; this is the largest in America. 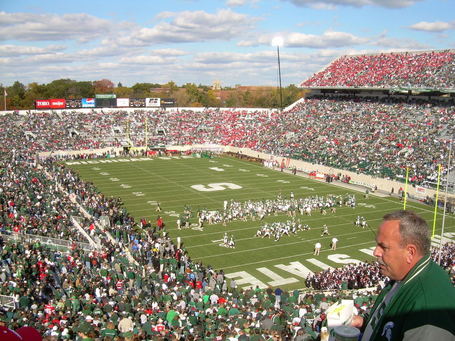 What Makes a Stadium...A Stadium

Stadium History - When was it built? Who built it? Any intriguing back story?

Fans/Student Section - Are they practically on the field? Are they loud or LOUD? Do they sell out the stadium?

Culture/Tailgating/Food - Does everyone eat so much before the game that stadium food gets ignored? Does anyone serve beer? Do you park next to the stadium or walk?

The Football Experience - Do the older people get mad when you stand up? Is the worst seat in the house still a good seat? Will you get trampled if you rush the field?