Although not known for a particularly stunning design or a particularly batshit-crazy fan base, Spartan Stadium is a great place to watch a ball game. Remember when Marvin McNutt caught that slant to keep Iowa undefeated? The fans were legitimately crushed, which although sad, is a sign that they cared about the games outcome and had screamed their lungs out for 4 quarters.

Build in 1923, Spartan Stadium, just like Ozzie Osbourne, has gone through changes during its long history. Originally built for 14k capacity, Macklin Field until 1957, this stadium now boasts a top notch sound system (U2 is coming!) and 75k seating capacity,

As for that new renovation, I haven't heard too many complaints. It helps with recruiting, it gives you a beautiful look out onto the field, and it definitely helped the aesthetic appeal from the outside. The facilities and offices inside are also sharp. 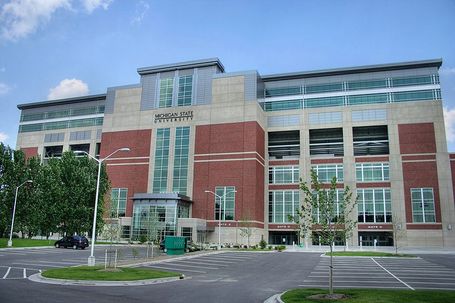 The stadium was never particularly beautiful, nor did it blend well with the campus. This new renovation fits well with the campus' focus on "faded red brick and green" colors. And it all came for the low price of $84 million dollars. /Starving children in Africa shaking heads.

According to the Spartans website, the Green and White has won almost 70% of its games at Spartan Stadium. Which, if put in context, just means they're horrible on the road.

Tim Staudt just did a nice piece on the natural grass that continues to grace the field in East Lansing. MSU has one of the best turf/sod research programs in the nation, so when they're not working on a nice grass blend for the football field, I assume all those scientists are working on a bluegrass mix which you can play 36 holes on in the afternoon, then take home and get stoned to the bejesus belt that night.

The walk can be quite scenic, or you can just park miles away and have a shuttle bus you from the Student Bookstore or a bar of your choosing. My personal favorite way to get to the game is a beer at Harrison Roadhouse followed by a stop to pee in the Kellogg Center, fitting a nice walk behind the Kellogg Center along the Grand River.

As for the 'gatin'...I always have a nice time by the tennis courts across the street from the Stadium. Considering Michigan State people party more than, oh I don't know, everyone else, the beer tends to be plentiful. I haven't had amazing food tailgating unfortunately - maybe my luck will change this year (grahamfiller10@gmail.com, let me know if you're an amazing Spartan tailgater. I'll stop by and sample the goods, then give you a thumbs up or down on TRE...)

I've never bought food at the game, being too full of beer and wings/etc to think twice. Plus it's a long long walk from my seats to the restroom. Because of that low bowl stadium, I feel like any seat in the lower bowl gives you a nice vantage point to watching the game. 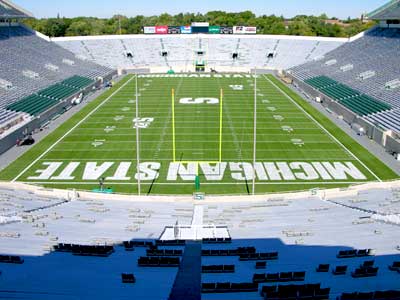 The guys I sit with are lawyers, professors...professionals. That doesn't mean they don't pass a flask when MSU scores...or doesn't score. The vitriol being spewed when Forcier drove UM 92 yards was pretty excessive, plus it blew my stepdad's 300 dollar win in the "Squares" game. I love the Block S in the middle - that's just classic. I also enjoy a panoramic view of the campus from my edge of the bowl seats.

The scoreboard...isn't one of the newfangled size of Texas ones, but I guess it gets the job done. The fans...are loud, really loud, and apparently Spartan Stadium holds sound in really well.

That's all for today, folks, but I'd love to see your pictures and hear your comments.