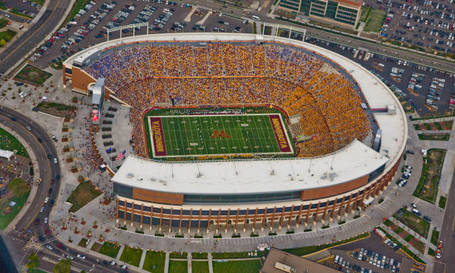 It's funny to me when people complain about the fact that Minnesota "sold out" when they sold the naming rights to TCF Bank Stadium.  It's funny for two reasons:

1) What major sport stadium has been built in the 21st century without the benefit of selling the naming rights to the stadium?

2) The people that are complaining about the University of Minnesota selling the naming rights to the stadium are probably the same people who used to complain about the Metrodome.

But I digress.  The fact of the matter is that the Golden Gophers now have a beautiful, outdoor, on-campus stadium to play in on those picturesque Minnesota fall Saturday afternoons, and hopefully the beginnings of some new traditions for Gopher Football.

There obviously isn't a lot of history to talk about at The Bank just yet as the Gophers have only played one season in their new home and as far as the play on the field, it wasn't one of the more memorable seasons as the Gophers went 4-3 at The Bank.

But the design of the stadium is at least worth mentioning.

The legislature approved the first new Big Ten stadium since 1960, in the Spring of 2006, and groundbreaking and construction of TCF Bank Stadium began in the summer of 2007.  The tree huggers in TRE nation will be happy to know that the goal all along was to make it as environmentally friendly as possible.  According the the stadium website: "97% of the neaerly 9,000 tons of steel used in the structure comes from recycled steel."  In fact, TCF Bank Stadium is the first LEED Certified collegiate football facility in the country.

The stadium also features one of the largest scoreboards in the country, a tribute to Minnesota's military veterans, and a nod to Minnesota's eleven Native American tribes.

But the best part about TCF Bank Stadium is that it is on the U of M campus with a beautiful view of the campus and downtown Minneapolis, it is open air and it isn't shared by any other teams.  The Bank provides Gopher fans with an absolutely beautiful setting to watch college football. 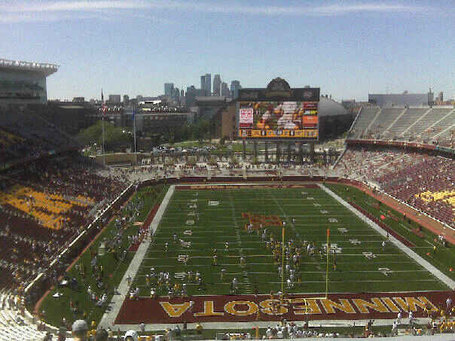 Once again, The Bank is a bit new to have a cemented culture of its own, but Gopher fans really seem to have embraced the atmosphere that the new stadium, and it's on-campus location, have brought to college football Saturdays.

The atmosphere around The Bank leading up to kick-off is something that was just never experienced at the Metrodome.  To be able to stand on the Tribal Nations Plaza and see into the stadium as the players are warming up and feel the electricity and excitement of being on-campus leading up to kick-off is almost worth the trip.  The atmosphere that the stadium creates around the U of M campus is one of the intangibles that people talked about as the stadium was being built, and it has really lived up to the hype.

Unfortunately one of the downfalls of having an urban campus in the middle of the city of Minneapolis is that open space is at a premium, meaning that parking, and thus tailgating, becomes fairly disjointed.  There is a main lot next to the stadium that allows tailgating, but the price to get a spot in that lot for the season is a bit steep for the common folk (read: me).  I have had the pleasure of tailgating in three different lots on the U of M campus, and have enjoyed each of them.  Minnesotans tend toward Summitt Extra Pale Ale and bratwurst, but many tailgates seem to have stepped up their game along with the new stadium.  Last year I saw ribs being smoked, steaks being grilled, taco bars and even a tailgate with sushi.  The mainstay of collegiate tailgates, however, is still beer, and Minnesotans (read: me) can drink it with the best of them.

Only time will tell what the true culture and tailgating traditions of TCF Bank Stadium become, but based on what I've seen, we're on our way. 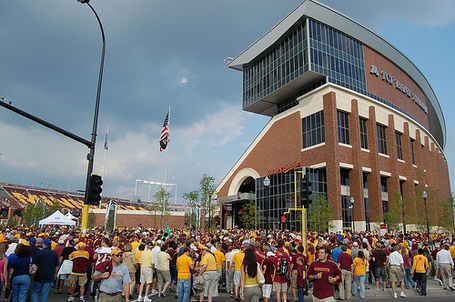 As mentioned before, the gameday experience at The Bank is fantastic.  Of course most Minnesotans really only have the Metrodome to compare it to, but that shouldn't take away from the atmosphere on campus leading up to a Gopher game.

Gopher fans (read: me) tend to be a bit of a cynical lot, but it's difficult to be cynical when you are sitting in the sun on a fall afternoon watching your favorite football team.  You won't hear Gopher fans screaming at the players, but they're still not afraid to yell at the coaches from time to time... they just follow it up with a "this is still better than the Metrodome."

Now don't get me wrong, it's not always warm and sunny on Minnesota fall afternoons, but that still hasn't dampened the spirits of Gopher fans who bundle up in their parkas and Carhartt's and head to their seats with a smile on their faces. (And if you don't know what Carhartt's are, or better yet own a pair yourself, you obviously aren't from the Midwest.)