Share All sharing options for: Twenty Big Ten Predictions for 2010

You can smell the football from here, can't you? It's close. Close enough, that it isn't too hard to predict what it is that will happen in this 2010 season. Still fuzzy? Let me help you.  Here are 20 things that you can expect to see in the Big Ten this season.

Greg Doyel probably has the column written already. Dennis Dodds, too. Ivan Maisel and Stewart Mandel are probably waiting to write the "well it's not the ideal way that it could have been done, but let's see how it plays out," columns. Here's the thing: ninety-three sports writers and 167 bloggers have written pieces on how the post-Nebraska divisions should be set. No matter what Jim Delaney announces in early-August, he can't choose all of the proposals. And thus, voila! Here come the easy columns in which scribes get to claim that the Big Ten was ignorant for not heeding their advice. Unless of course, you are the lone scribe who gets to praise the Big Ten for following your advice. Yawn. 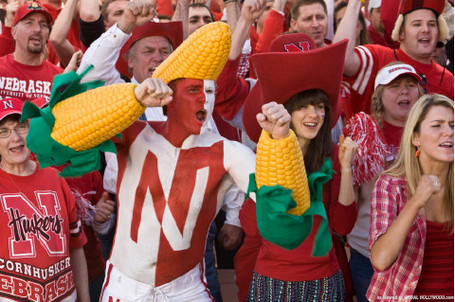 I think that the Big Ten now keeps its powder dry. Texas forced Jim Delaney's hand on Nebraska with the Pac-16 situation. He admitted as much. Now, unless Notre Dame or Texas makes a move toward the Big Ten - and that won't happen, I think the league takes a wait and see approach. It's not like the other schools mentioned (Rutgers, Pitt, Syracuse, Mizzou, etc.) won't wait for the phone call.

Want to listen to three lawyers argue about the framers' intent with regard to the commerce clause? How about three lawyers arguing about the likelihood of Michigan having a winning record this year? If you're in the second group, head over to Black Heart Gold Pants and listen to Bama Hawkeye defend his predictions under the white-hot questioning of HawkeyeState and Adam Jacobi in Episode 32 of the Black Heart Gold Podcast.

Talent and scheduling meet here.  The schedules (planned far enough in advance that it is a happy circumstance) give the league the chance to have nice wins, without any true showdowns (like the Ohio State-USC games). Yes, Penn State travels to Alabama. But will anyone expect that the Lions, with a QB starting his first road game, will beat Nick Saban's defense? Similarly, does anyone think that Minnesota is going to beat USC? The important games are Ohio State beating Miami in the Horseshoe, Iowa winning in Arizona, and Wisconsin beating Arizona State in Madison. Add the league taking two of three from Notre Dame (Michigan, Michigan State, and Purdue), and it will be a successful non-conference season.

Let's just get it behind us. Top targets: MAC West favorite Northern Illinois at Illinois or Minnesota, Toledo at Purdue, Western Michigan at Michigan State, or (an admittedly rebuilding) Central Michigan at Northwestern. The Big Ten is helped that the two best teams in the East Division play at Ohio State (Ohio) and Penn State (Temple). I don't see either of those upsets happening. I'll take the Huskies to win one of their two. 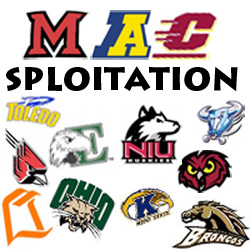 Who's going to stop them? Iowa? The Hawkeyes have four wins and one tie against the Buckeyes in the last thirty years. In those games, not once have the Buckeyes had one of their "good teams." 1983, 1987, 1988, 1991, 2004 - each Ohio State squad lost at least three regular season games. This team is better than that. Penn State? Maybe Kevin Newsome won't be intimidated by the Horseshoe after already playing in Tuscaloosa and Iowa City. But that doesn't mean that he's ready to win there. Wisconsin? Ahhhh...and here's the scariest game on the slate. The Badgers nearly beat Ohio State in 2008 and completely outplayed the Buckeyes in 2009 (and then repeatedly gave the game away on special teams and with turnovers). With the game back in Madison, it could be Bucky that stops the Buckeyes. I don't think it happens, but it's the best chance.

Look, I hate Nebraska as much as anyone who ever lived in Iowa and Missouri should, but the Huskers are going to be good this year. The offense should be improved (it'd be hard not to be). If Jared Crick can have a teammate step up on the defensive line, the defense should be near the wrecking crew that it was last year. Before expansion blew up the Big 12, I had Nebraska going to the BCS Championship Game. There is no way that the Big 12 let's the Huskers run the table now, but that won't stop this from being a very strong 11 win squad.

All of the focus on Iowa's schedule has been about the good teams coming to Kinnick. And this year's slate is home-heavy. That said, as a Hawkeye fan, I'm not afraid of Iowa facing Wisconsin or Penn State. Those matchups work well for the Hawkeyes - and past results bare that out. I am terrified of seeing the Iowa defense face the Rodriguez spread again. If I'm RichRod, I watch the second half of the Orange Bowl and take note. What did Georgia Tech do on their first two drives? Run to the offense's right side, away from Adrian Clayborn. What happened? Two long drives (resulting in a missed field goal and a touchdown). Broderick Binns, it could well be that the success of the Hawkeye season will depend upon your ability to stuff the run. 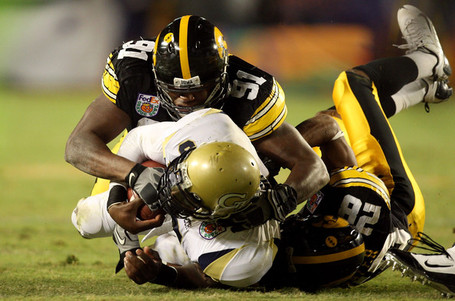 Last year, Penn State was vastly superior to 10 opponents and dominated all 10. They played two teams that were equal (or superior) in talent, and were defeated by double digits. I expect that we'll see that same thing this year. Big wins over weak teams like Indiana, Minnesota, and Temple. Double digit losses to Ohio State, Alabama and Iowa.

This says as much about the new bowl partnerships for the league as it does Wisconsin's place in the conference. With the top three bowl slots after the BCS taking place in Florida, Big Ten teams 3-5 will winter in the Sunshine State. What is Wisconsin? Perpetually the 3rd, 4th, or 5th best team in the Big Ten.

Where do they get a three game improvement? Do you really think that Michigan is going to lose to Illinois again? That's one. If they win three of the following four (@Notre Dame, Iowa, Michigan State, @Purdue), they'll make up the three games. Yes, they'll have defensive problems. But, that offense is going to be enough on its own to beat a lot of teams.

Did you realize that last year Purdue beat Michigan and Ohio State last year and didn't make a bowl game? I'm going to say that had previously never happened in the last 30 years. If I'm wrong, you can tell me. Purdue fans have a lot to be excited about, and as Iowa and Wisconsin take a step back in 2011, Purdue will be poised to make their leap forward.

Two things that I'm very confident you will see in October 2010: 1) Tea Party folks being angry about stuff; and 2) Michigan State having a losing record in the month.

Last year, there were losses at Syracuse and Minnesota. This year, I think that they match that start. Look for a 3-2 split of these five games: @Vanderbilt, @Rice, Central Michigan, @Minnesota, Purdue. 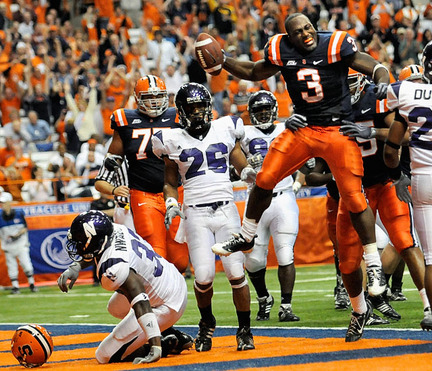 And it might not even be close. Coming into last season, Illinois had a loaded offense and a questionable defense. This year, the defense is a full-blown rebuilding project, while the offense is in shambles. A slightly easier schedule may mean a slightly better record than last season's 3-9. But not much better.

A smart team will hire him as an assistant and director of recruiting.

Where to start? Minnesota lost 9 starters off of last year's defense, including the strength of the team - their entire linebacker corps. The quarterback situation is a mess, and likely getting messier. Coach Tim Brewster successfully recruited MarQueis Gray to come to Minnesota. An incredible athlete, he was the perfect fit for the open spread style that Brewster wanted to run. Now, Brewster has installed a pro-style offense that suits current starter, Adam Weber. Weber, who only looked impressive when paired with now-Denver Bronco Eric Decker, is better suited for the pro-set. But Weber is best suited for backup. Bringing Gray in to run a Pro-Style offense? That's going to be a work in progress.  The offensive line, a consistent strength at Minnesota as Marion Barber and Laurence Maroney racked up 1,000 yard seasons, was decrepit last season. There is little reason to think that it will be any better. There are plenty of reasons to think that Minnesota will be a lot worse.

A new stadium is a selling point for only so long. After that, you need to win.

I wouldn't be surprised to see both Terrelle Pryor and John Clay making the trip to New York City.

Just a gut feeling on this one. 2010 will be season number 45. He's outlasted Bobby Bowden, and will end his coaching career as the winningest Division 1-A coach of all time. He'll win game number 400 in October, making him one of only three men to accomplish the feat. He's never going to catch Coach Gagliardi of St. John's (MN), who is at 471 wins and still active. Would Paterno hang on one more season just to pass Eddie Robinson, who retired from Grambling in 1997 with 408 wins? I don't see that as a motivator. The only reason he'd keep going would be if he just can't give up the business, yet. And then, there is his health. It's never good when your employer has to release statements refuting health concerns for three consecutive months. And yet, that's what happened at Penn State this summer as JoePa missed a number of speaking engagements. Maybe it's nothing - I hope that it is. But it could also be what causes Sue to have a long, hard, sad conversation with her husband. If it is the end of the line for Coach Paterno, he'll deserve every word of praise that will be heaped upon him. 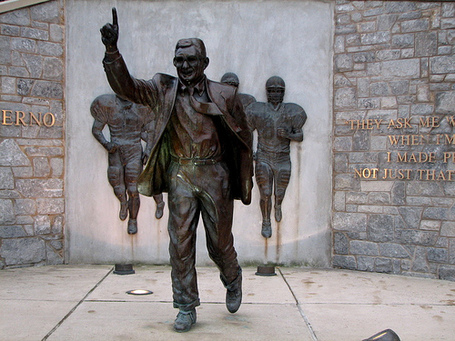