Where I Come From: My Favorite Big Ten Moments

Share All sharing options for: Where I Come From: My Favorite Big Ten Moments

Prettttty clear as to what's going on here. Pick a Big Ten moment where your heart stopped or you clapped a hand over your mouth because you couldn't believe what was going on. 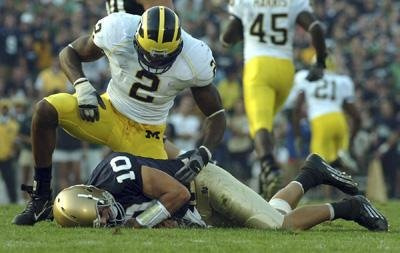 Brady, this may hurt now, but I will hurt more when I'm called for a bogus late hit penalty against OSU.

Two recent moments come to mind. 1) I was sitting in Eddie George's when Navy scored a long touchdown to tie up the score against OSU in 2009. The sheer ridiculousness of it all, along with the air being sucked out of the restaurant, made me smile stupidly with complete joy. 2) Michigan - OSU 2006. Under an overcast sky, I felt like the world was holding its breathe...What a crazy pre-kickoff feeling, knowing that one of these behemoths would have a loss at the end of the day. 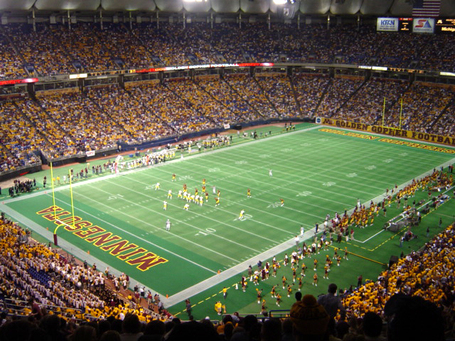 My favorite Big Ten Moment was last bowl season. After a few years of being the pawn of every conference, the Big Ten finally struck back, taking out several great teams on their way to a stellar post-season record. The big games were won, and SEC, ACC, and Pac-10 speed were shown to be no match against cornfed linebackers. It was finally time for the Big Ten to take over, and, in the month of December (and a week of January), they finally did.

Some off the cuff snapshots, most of them recent, but not all, and not necessarily in order:

The Game, and The Ten Year War.

Ohio State winning it all in 2002.  I was living in Florida, and the amount of SHIT I was taking leading up to that game was unreal.  Heck, I could make a top ten about that game.

Iowa beats Georgia Tech in the Orange Bowl:  First BCS win for the Hawkeyes, and my brother was elated.  My brother would probably argue the win against undefeated Penn State was bigger, because it was at home, at night.  I refer you back to the tailgating blurb.

Holy Buckeye!!  That was the moment many Buckeye fans thought this was a team of destiny.

The catch Anthony Gonzalez made in 2005 to set up the winning score against Michigan.

Rhys Lloyd beats the Badgers 37-34 in 2003 and leads the charge over to the Wisconsin sideline for Paul Bunyan's Axe.  I just loved the pure emotion of the moment; quintessential Big Ten.

The Game, 2006.  That was a great game that locked down the Heisman for Troy Smith, and it really cemented Jim Tressel as a rightful heir to Woody's legacy, at least in my mind.  I still feel Michigan deserved a rematch in the National Championship game.  Was the last great moment for the conference for a few years. 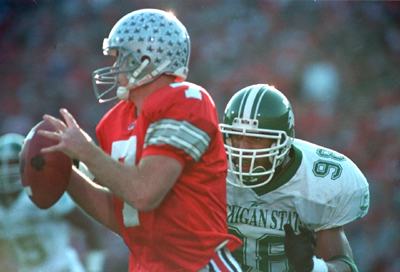 The Gophers go to Ann Arbor and win The Little Brown Jug in 2005.  Planting the Ski-U-Mah flag on the 50 was a bit much, but again, I loved the pure emotion of the moment.

Michigan sending Lloyd Carr out a winner against Florida in the Capital One Bowl.  No post game singing of the Michigan fight song was as ever emotional as that one.  Hail, to a Victor, valiant.

2010 Rose Bowl.  If that is going to be the rule and not the exception for Terrelle Pryor, Ohio State can win the National Championship.  But we'll see.

Watching Ohio State beat #1 ranked Iowa from the student section in 1985.  We stormed the field and carried a part of the goalpost across campus up to High street.  No one knew what to do when we got there, so we just dropped it and headed to Papa Joe's.  The beer helped stave off pneumonia, because it rained and it was cold almost the whole damn game.