Dawn of an Empire

Share All sharing options for: Dawn of an Empire 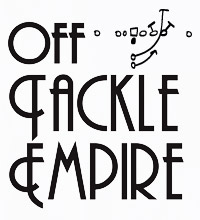 In April, 2008 while we were supposed to be studying for law school finals, a Buckeye and a Wolverine started an under-the-radar college football blog: The Rivalry, Esq.  Our goal was to recreate the debates we had as undergraduates camped out at an imitation German pub: The Steinkeller.

Four months later we became Sports Blogs Nation's first conference specific site. We kept our name and original concept in tact, but invited fans of all eleven Big Ten schools to take the concrete stairs down to that little basement bar.  It's been two years since we created "the quintessential Big Ten smoking room," and we've been blessed with an active community that has grown to over 1,000 members.

In light of our diverse readership, we began kicking around the idea of updating our brand name this spring to more closely fit what we do.  Although we have a special reverence for "The Rivalry, Esq.," we felt that the name had a shelf life.  It was easy to confuse "The Rivalry," with "Rivals," and it wasn't immediately clear what the "Esq." suffix had to do with Big Ten football.  Although six of the nine people working on the site are law students/legal professionals, aside from an occasional tongue-in-cheek reference, our content has little to do with the law.

Perhaps most damning, we were a conference site named after only two teams in the conference.

For these reasons and others, we decided it was time to bite the bullet and update our brand.  It wasn't a easy decision and we didn't take it lightly.  We wanted a name that could work 5, 10, even 20 years down the road, and after conducting a month long search -- considering literally hundreds of options -- we unanimiously settled on Off Tackle Empire.

Off Tackle Empire conveys the awesome might of the oldest and richest brand in Division 1 athletics.  "Off Tackle" refers to the power running game the Big Ten is historically famous for.  Empire plays off the conference's current push for expansion, suggesting a Midwestern manifest destiny.  The name is rock solid, just like the league.

Later today, the blog will switch to a new name, logo, and domain. Everything else will remain the same. Readers who attempt to access the site using the old address will be automatically forwarded to the new URL. TRE memberships will be automatically converted to Off Tackle Empire. Our entire community and archives will remain 100 percent intact.

Like any major transition, there may be growing pains, but we're confident that we've created a platform that is ready for the future.

See you on the other side...

Jon, Graham, and the Editorial Staff