If History is Any Indication Michigan May Be Back Shortly

Share All sharing options for: If History is Any Indication Michigan May Be Back Shortly 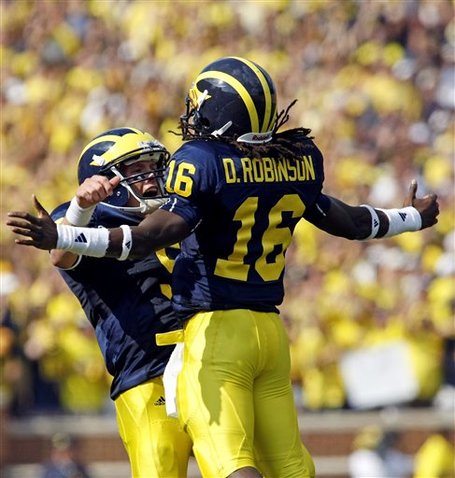 Is this your 2012 BCS National Championship Game MVP?  It wouldn't be the first time...

Earlier this week I did a piece on the consistency of elite programs, as measured by the number of times they've fallen into the cellar.  I went through almost 800 seasons worth of records to test a commentator's theory that Ohio State was the most consistent program in college football.  Although my focus was on times a team finished with more losses than wins, I couldn't help but notice a fascinating pattern, one that may be quite comforting for fans up north.

It seems that it doesn't take elite programs too long to crawl out of the basement.  In fact, every program I looked at except for Texas has won a national championship less than 5 years after suffering a losing season and most have done it multiple times.

Oklahoma went 5-6 in 1998.  Two years later they beat Florida State in the Orange Bowl to complete a perfect 13-0 season.  Alabama freshmen suffered a losing season in 1957, only to win a championship as seniors in 1961.  (Although it's technically just out of our 5 year range, it only took the Crimson Tide six seasons to go from 4-9 in 2003, to a perfect 14-0 last year).

Ohio State was 3-5-1 in 1959 under Woody Hayes.  Two years later, they were undefeated.  Similarly, just two years elapsed between the Buckeyes' losing effort in 1966 and their vaunted 1968 championship.

When it comes to reloading, it's hard to compete with the USC Trojans.  Although just 5 years elapsed between USC's 1934 losing seasons and 1939 championship, the Trojans were responsible for perhaps the most impressive turnaround in NCAA history.  Only one year separates USC's 4-5-1 season in 1961 and their 11-0 championship in 1962.  More recently, the Trojans went from 5-7 in 2000, to 12-1 and an AP National Championship in 2003.

So what about Michigan?

The Wolverines have rebounded from losing seasons to win national championships 3 times.  Fielding Yost avenged a 1899 trip to the cellar with a point-a-minute offense and championship in 1901 and did it again from 1919 to 1923.  Finally, Michigan enjoyed a four year turnaround from 1928 to 1932.

Modern triumphs these are not.  But taken together, the data does establish a precedent for programs that have turned themselves around virtually overnight.

Still, Michigan fans should probably hold off on buying those tickets to New Orleans for the 2012 BCS National Championship Game.  History is a funny thing, after all.