Back for 2010 is what is inarguably -- wait, this is a blog full of lawyers, so NOTHING is inarguable (I kid, I kid) -- our most popular feature is 'Closing Arguments', where we lay out the case for each team for the upcoming Big Ten season.  Today, we'll start off with one of the pre-season favorites, and we'll roll out each team leading up to the first game of the season.

"Since it is difficult to join them together, it is safer to be feared than to be loved when one of the two must be lacking."—Niccolo Machiavelli

Throughout the Jim Tressel era, there has been no more consistent or reliable program in the Big Ten as Ohio State.  They have dominated their rival Michigan in a way that a lion dominates a wounded water buffalo, they have won the conference's only BCS national championship while making the title game two other times, they are the only Big Ten team to even make the BCS National Championship, and have either shared or won the Big Ten title outright 6 times, 3 of the last four outright.  With the talent on the roster and head coach Jim Tressel on the sidelines, that dominance looks like it could carry through 2010 and beyond.  They are loaded on offense, talented on defense, and have expectations of playing in the National Championship game.  If they get there, they have the talent to win it.  But first, they must get through what is expected to be the toughest Big Ten lineup since the early aughts.

Ladies and Gentlemen of the Jury, I rise in defense of my client, THE Ohio State Univerity, or THE University of Ohio State, as Terrelle Pryor might say.  Ladies and gentlemen, my client is one of the most misunderstood teams in recent college football history. There is only one team that has 8 BCS bowl appearances, and that's Ohio State.  That's more than the most recent BCS championship game participants Texas and Alabama...combined.  There are three teams with 5 BCS wins:  Florida, USC (but one has been vacated)...and Ohio State.  Only Oklahoma has as many national championship game appearances as Ohio State, and the Big Ten team with the second most BCS appearances is Michigan, with 4.  They are 1-3.  Ohio State has lapped their conference competition, at least in the BCS era.

And how is this fine program, run by an upstanding man, a son of Ohio, a fellow Midweterner, treated in regards to their accomplishments?  With DERISION, and SHAME, ladies and gentlemen!  To hear their detractors, you would think Ohio State had no business playing football at the Division I level.  POPPYCOCK, I say to you, POPPYCOCK!!

Over the course of this trial, I will lay the groundwork and explain why, above all other teams, Ohio State is still the flagship program in the Big Ten, and will be, at least for the near future.

B. The Pussycat Dolls Say, ‘Don’t Cha Wish Your Football Team Was Hot Like Me?’

On the outside, you seem perfectly content with your football team.  There’s a comfort there, a familiarity that’s developed over years of faithful and loyal cheering.  But Ohio State is the hot team yours will never, ever be, and that pisses you off.  Oh sure, every now and then, your team will put on a hot outfit, head out to a bowl bar, and come home with a one night piece of hardware, or if you're Michigan State, a bad case of the crabs.  But when you wake up in the morning that cheap wood and plastic bowl trophy pales in comparison to the one thing no other Big Ten team has, and that’s the BCS Crystal Football.  Hell, when it comes to that club, you can't even get past the velvet rope, no matter who you offer sexual favors to.  No, for you, 7 wins and a bowl game is a good season, and once every ten years, just so you will have stories to tell your grandchildren, your team goes on a roll and ends up in a BCS bowl.  Unless you’re Minnesota.  Or Indiana.  I mean, it galls you, and it gets under your skin, and you let your mind wander...what if my team was as good as Ohio State?  What if my team could recruit like Ohio State?  What if my team had a coach as good as Jim Tressel?  What if my team had the history and pedigree of Ohio State?  It’s best not to think that way, or it will drive you crazy.  Like the gals say:

A.  Who Hates THE Ohio State?

Everybody, that's who.  Nobody wants to cheer for the Empire over the Federation, the Harlem Globetrotters over the New Jersey Generals, or BP over the Gulf of Mexico?  Why?  It’s the unbridled arrogance that just chaps your ass and makes you want to beat the piss out of Ohio State.  Let Ricky Bobby, the Official Ohio State Spokesman for Excellence explain:

Nothing gives you more joy than the collective misery of Ohio State fans following a loss.  When you watch Ohio State, you want them to wreck, not piss excellence.  But you know, and I know, and you know that I know one thing:  Ohio State does piss excellence, week in and week out.  More frequently than an alcoholic diabetic.  But you live for that car wreck, don’t you?  Because for one, maybe two Saturdays a year, you get to text your Ohio State buddies and say ‘U SUX LOLZ!!!’  But we don’t do that to you, because most of us can’t afford all the texts we would have to send, week in and week out, to reinforce what we both already know:  Your team really does suck, and never will piss excellence like Ohio State does.

Maybe its because he's near suicidal watching Rich Rodriguez destroy a once proud program, but Graham Filler is no fan of the Scarlet and Gray.  As a matter of fact, he takes his hate to a level that really pisses me off:  apathy.  That’s a true sign of disrespect there.  Let Graham explain:

"So where do I go to tap into my OSU hate? What well do I draw from? I can't make an "OSU Suckz LOL" argument because that's just not my style.  But there's one thing that truly drives me to not feel especially warm about Buckeye football. As I mentioned before, I've spent some good weekends in Columbus. I've seen the band go across the field and the I get dotted. I've been there on Senior Day. I've been at parties where people found out I was the only Michigander and they sang "we don't give a damn about the whole state of Michigan" at full volume to me. And I gotta say...I just don't get it. None of this moves me. Call it sociological or regional bias, but I figured I would be semi-charmed by all these traditions and quirky behavior. Nope. It's just kind of grating."

And why does the rest of the Big Ten hate Ohio State?  Say what you want, but it’s not the traditions that are better than everybody else’s, it’s not the best stadium in the Big Ten, and it’s not even the humbleness and hospitality displayed by the Ohio State fanbase.  It’s results, baby.  We are the benchmark, the Flagship Program, the Belle of the Ball.  If we beat you, it’s expected.  If you beat us, it’s a benchmark, a springboard, the defining game in your season and your nice little upstart program.  It’s a fucking event that leads your local news in West Central Nowhere.

And it’s also as rare as a unicorn sighting, at least in this decade.

Don’t Cha wish your football team was a good as mine?  Don’t cha?

B. Why You Should Love Ohio State 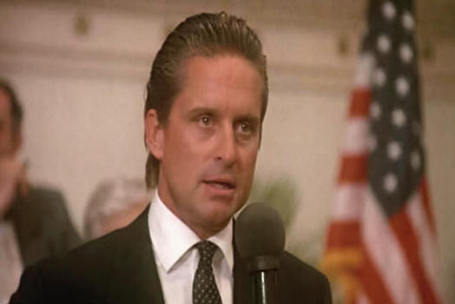 Gordon Gekko gets it

Ohio State, for lack of a better team, is good awesome. Ohio State is right. Ohio State works. Ohio State clarifies, cuts through, and captures, the essence of the evolutionary spirit. Ohio State, in all of its forms; Ohio State for life, for money, for love, knowledge, has marked the upward surge of mankind and Ohio State, you mark my words, will not only save The Big Ten, but that other malfunctioning corporation called the U.S.A.

So does General Patton:

"When you were kids, you all admired the champion marble shooter, the fastest runner, the big league ball player, the toughest boxer. Americans love a winner and will not tolerate a loser. Americans play to win all the time. I wouldn’t give a hoot in hell for a man who lost and laughed.  The very thought of losing is hateful to Americans."