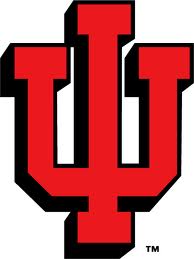 I spent a few days at a friend's lake house earlier this month wakeboarding, smoking cigars, and fishing.  My humanitarian fiancee was horrified to see our friend use a small live perch as bait to try to catch a bigger bass.  I too felt a bit sorry for the guppy, who hopelessly wriggled on the hook as if it could some how shake its way free.  I share this story because in many ways Indiana football reminds me of that minnow.

It's not that the Hoosiers are poorly coached or prepared, or that they give insufficient effort, they're just at the bottom of the Big Ten food chain.

Still, you have to like the effort that Bill Lynch's club put on the field in 2009.  A 4-8 finish doesn't begin to describe the competitiveness the Hoosiers displayed in heartbreaking losses to Michigan (up 33-29 with 8:00 minutes in the fourth quarter) and Iowa (up 24-14 heading into the fourth quarter, only to be outscored 28-0).  Although losing seasons aren't ever something to write home about, it's clear that Lynch has patched up talent mismatches in Bloomington to the best of his ability.

The good news is the Hoosiers have a record breaking quarterback in Ben Chappell, who puts some pace on the ball out of the pistol.  They also have their best recruiting class in years, and a talented new offensive line coach in Mo Moriarity.  The bad news is that Indiana will field perhaps the worst defense in the conference.

Ladies and Gentlemen of the Jury, I rise in defense of my client, Indiana University.  I can't guarantee that these Hoosiers will make their second bowl game in 17 years, but I can promise that they're going down swinging.  The fourth best passing offense in the Big Ten in 2009 is primed to put the petal to the medal with a veteran quarterback (Chappell) and arguably the best set of wideouts in the conference in Tandon Doss, Damarlo Belcher, and Terrance Tumer.  Don't be surprised to see the Hoosiers attempt upwards of 40 passes a game.  On the other hand, Lynch will attempt to maintain a balanced offense on the legs of emerging running back Darius Willis, who ran for 607 yards and 6 touchdowns last year. 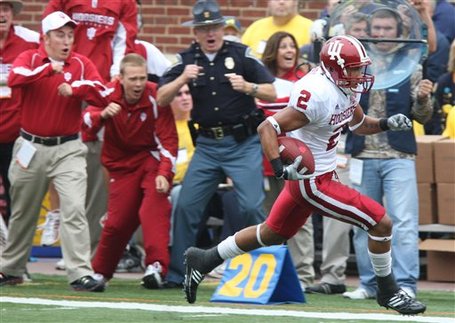 Tandon Doss is one reason to watch the Hoosiers in 2010.

On the other side of the ball, Indiana will count on safety Mitchell Evans and cornerback Matt Ernest, as well as junior college transfers Lenyatta Kiles, Andre Kates, and linebacker Jeff Thomas to hold down the fort.  Sure, the 400 yards a game they're bound to give up is a crime around these parts, but consider the mitigating circumstances: the Hoosiers are replacing 8 starters from the second worst unit in the Big Ten.

I therefore ask you to give these guys a chance.  If you see a replay of the Towson game on the Big Ten Network on a Tuesday night at 1:30 a.m., watch a quarter.  You never know when Indiana will spring a solid upset.

Here's some of what we've written about the Hoosiers over the off-season:

I'll say it, I like Bill Lynch.  I like him because despite the fact that the Motor City Bowl is usually the best case scenario for his team, and they're usually out of contention for that by mid-October, he coaches like he's down 14 points in the third quarter of a conference championship game every Saturday.  I can't think of a coach that gets in the ears of referees more often.

And let's face it: everyone (save for Purdue) likes the Hoosiers.  They've got a handsome but friendly new athletics facility and clean shaven uniforms.  There's nothing not to like.  Then again, there's not really much to like either...

A. The Indiana Challenge

I challenge you to watch 3 full length Indiana games this season.  If not in real time then at least on DVR.  Look at it like this: you're going to be watching Tandon Doss and Damarlo Belcher on Sundays, so you might as well start now.  Not an NFL fan?  No problem.  At least one source calls Indiana a "darkhorse" candidate in the Big Ten.

Here are the three games I'm most looking forward to:

For better or worse, these teams are Siamese twins with their powerful offenses and puny defenses.  A fantastic matchup last year spawned blood in Ann Arbor.  I can't wait to watch Bill Lynch get another shot at the Wolverines.  As a bonus point, Indiana should be undefeated heading into conference play. 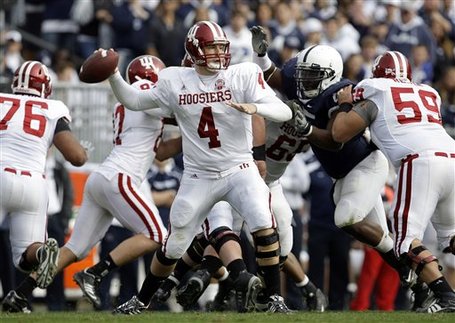 Ben Chappell has plenty of experience running the pistol.

Last year the Hoosiers looked tough for the first several weeks in Big Ten play, only to sh*t the bed in an out of conference visit to Virginia.  Indiana needs this win to have any hope at bowl eligibility.

Despite the fact that at least one team is usually down, this intrastate rivalry is always a good show.  I say DVR it and watch it the week before the other conferences host their championship games.