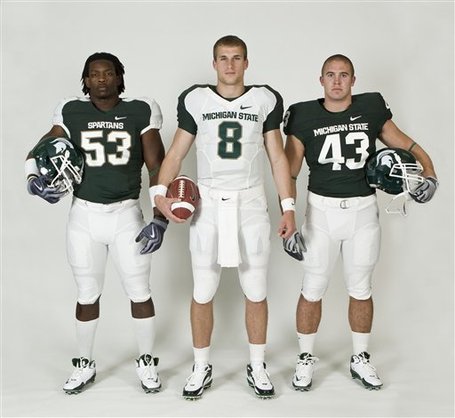 "I'll believe ya when me shit turns purple and smells like rainbow sherbet."
-- Super Troopers

Michigan State always has expectations...and those expectations remain constantly unfulfilled. When Forcier was leading a 92 yard game-tying drive last year, the prevailing emotion amongst the Spartan faithful was "of course, here we go again."

But this year is different...right? The Spartans should go 8-4 or 9-3 with that cake schedule...right? No one's going to get suspended for trying to destroy a douchebag fraternity ala bizarro Revenge of the Nerds...right? The leadership provided by Kirk Cousins, Greg Jones, and the calm Mark Dantonio will give much needed stability to this constantly fluctuating program...right?

We'll see. Michigan State has all the offensive tools to succeed in 2010, but injuries, scandals, and questionable coaching has cost them dearly of late. Combine those negatives with a "who are you" secondary, and I don't' want you to get overly excited.

Ladies and Gentlemen of the Jury, I rise in defense of my client, Michigan State University. Let not your ears grow weary hearing references to MSU blowing late leads and/or getting their heart ripped out. Instead, let your eyes gaze over the Big Ten's second best linebacking corp, let your heart skip a beat at the sight of Keshawn Martin slicing defenses open, and let your soul rest at the knowledge that the Spartans have the potential to score 35 points per game. Read with glee these words...

The MSU O-Co is not asleep at the wheel. Don Treadwell has shown, time and time again, an ability to adapt to changing situations. Last year, with a power run game and a shaky quarterback, he rode the Ringer train because he knew it was their best chance to succeed. Treadwell knew the combo of a solid defense, a great kicker, and a time killing run game could result in some wins. It did. This year, the run-first mentality was shaken up when everyone realized that 1) Cousins was a superior quarterback to Hoyer and 2) the line was much much better suited for pass blocking.

In the Alamo Bowl, Treadwell threw the damn kitchen sink onto the field. He's clairvoyant, reading the situation correctly (again), knowing that staying close to TT would be next to impossible by playing vanilla football.

Opposing counsel may have planted a bug in your ear about "the horrendous secondary play of 2009" and how Dantonio's defense coordinator looked genuinely lost last year. That's old news. This new year brings change...and signs that MSU may finally be mixing up their stagnant defensive schemes. 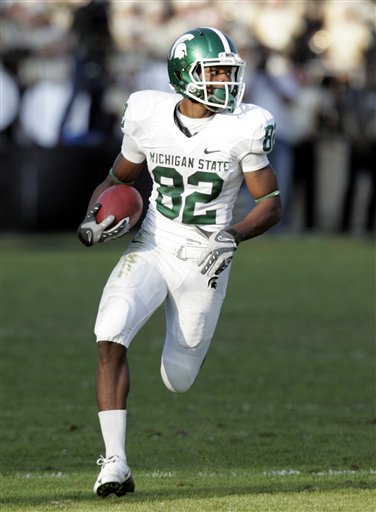 That would be me, running by you. Again.

Michigan State returns All-American linebacker Greg Jones, who weighed his NFL chances and came back to East Lansing. I was unhappy with this decision for a variety of reasons, mostly because he obtained All-American honors at MSU, and my god he should have rode that surprising hype straight into the 2nd or 3rd round of the draft. He'll join Eric Gordon (strong, tough, talented), Will Ghoulston (All-American potential), Chris Norman (ditto), and others to form the backbone of this defense.

The key to defensive success? Scheming aka players knowing what the hell they're doing and coaches putting players in a position to succeed. All this offseason talk from Dantonio about mixing up his 4-3 schemes and inserting 3-4 schemes to get his talented LBs more field time...is just talk until they can carry it out effectively on the field. C'mon Mark, none of this skittish defensive playcalling and hesitancy to bring pressure. Mix up your formations so we don't have another "we knew exactly what defense was coming" statement from opposing teams.

II. Factual Summation, or Discovery, as the Barristers Might Says

Here's some of what we've written about the Spartans over the off-season:

A. The Michigan State Challenge

I challenge you to watch the MSU defense VERY closely during the relatively easy non-conf schedule. Are they mixing in formations and letting all their linebackers get comfortable? Is the secondary playing aggressively or just sitting in a bubble prevent-ish scheme? If the defense even makes baby steps forward this year, it's going to make a huge difference in East Lansing.

Here are the three games I'm most looking forward to:

A win here for MSU and they could be 8-0 heading into the Iowa game.

The schedule sets up nicely. A transitional ND team is extremely beatable. Michigan needs to show some defensive prowess before they can be favored against MSU. Even Northwestern lost many of its playmakers from last years squad. So an upset over the Badgers could help push the Spartans into uncharted territory.

Last years game killed the excitement scale and made everyone reevaluate whether watching football is good for the heart (opinion: it's not , but what are you going to do?). How will MSU attack the small Purdue linebackers? Will the Spartans questionable secondary get their bones picked clean again by the Boilermakers?

This game is always good for a beatdown. MSU and their late season swoons always seem to hit their low point against the Nittany Lions, capitulating early and letting PSU coast to a huge blowout. But there is no Daryll Clark, there's no three-headed monster at wide receiver. So the Spartans at least have a chance?