Wisconsin enters the 2010 season as a not-so-darkhorse favorite.  They have 10 of 11 starters returning on offense, which as a unit finished 2009 first in the Big Ten in both yards and points.  RB John Clay should be considered in the Heisman talk when it’s all said and done, but he won’t, because Big Ten schools have too much self-respect to start a Ministry of Propaganda Department for an over rated award.  We let the Pac-64 do that.  Clay had over 1,500 yards last season, and with all starting linemen coming back to form arguably the country’s best offensive line, there’s no reason to think that they can’t be the Big Ten’s best rushing offense again.  Senior quarterback Scott Tolzien returns as the Big Ten’s most efficient passer, and with a loaded receiving corps, they could transition from an efficient, move the chains type passing game to flat out explosive, especially if teams key on Clay to stop the run, which they most assuredly will. 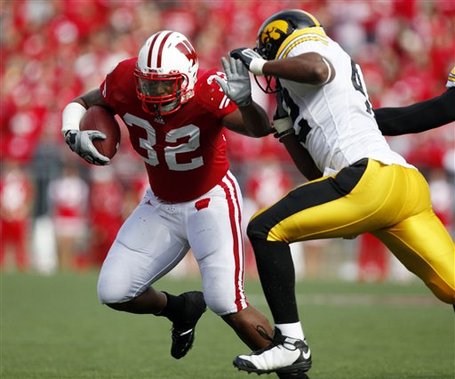 This is John Clay.  He is reee-damn-diculous good

On defense, the biggest loss is 12 sack guy O’Brien Schofield, but DE JJ Watt will fill that void quite nicely, thank you.  Watt is a ferocious pass rushing DE, and if the Heisman were truly about the best college player winning it, Watt would be a serious contender.  They might have the most talented and overlooked linebacking corps in the conference, lead by Culmer St. Jean and Chris Borland.  The secondary is as experienced as it has been under Bret Bielema, so now it’s time to work on consistency.  They seem to prone to give up the big play at the wrong time, so discipline will be a big factor in whether or not the secondary will be a strength or a liability.

Their schedule sets up pretty favorably.  They have one BCS opponent in their non-conference schedule (Arizona State), and for their conference schedule they get Ohio State at home, with Iowa on the road.  Although you couldn’t get them to say it publicly, I bet that if they had to choose which game they wanted to take their chances on away from home, Iowa would be the pick.  Ohio Stadium has been a House of Horrors for Wisconsin under Bielema, but they have played the Hawkeyes tough at Kinnick.

On paper, Wisconsin is as talented as any team in the Big Ten, just like they are almost every year.  They dominated a Miami Hurricane team that was thought to be athletically superior to them in the Champs Sports Bowl, but why were they playing in the Champs Sports Bowl and not the BCS?  We’ll talk about that in a bit.  Is this the year they climb the mountain, conquering themselves along the way?

But I digress.  No, ladies and gentlemen, I submit that just like the son is not guilty of the sins of his father, so too are these Wisconsin Badgers not guilty of the sins of Badger teams of recent memory.  I ask you to put aside your pre-conceived notions of what you think you know, and look at what you see.  And what you see is this:  They have the best returning running back and offensive line in the country.  Although they lost some key players on defense, Bucky recruits well and has talent waiting in the wings to replace it.  They have an experienced, seasoned leader at quarterback, a stable coaching staff, and one of the most formidable home field advantages in all of college football.  This is a football team that can not only play for the Big Ten Championship, but for the BCS National championship.

Here's some of what we've written about the Badgers over the off-season:

Wisonsin tends to build you up, gets you thinking that this is it, and then crushes your heart in their hands while you watch for all the public to see.  Kind of like this guy:

A.  The Wisconsin Challenge

I challenge you to look at the Wisconsin roster, top to bottom, and then tell me who in the Big Ten is better.  I would take Scott Tolzien’s resume over Terrelle Pryor’s right now if this were a job interview.  Tolzien is better than Ricki Stanzi in every category except patriotism.  Is there any other running back or offensive line in the Big Ten that is better than Clay and his Wall of Humanity?  No, there isn’t.  Their receivers are relatively unknown, but they have as much talent as anybody.

On defense, they are an athletic and swarming group.  Watching them pursue to the ball against Miami was like watching a ketchup pack explode—there was red everywhere, it covered everything, and then you cursed, either in admiration or disgust, depending on who you were cheering for.  I’ll take their linebackers over anyone’s, and if their secondary can play well, they will be able to dominate an opponent.  The loss of Schofield hurts, but to say the cupboard is bare on the defensive line would be like saying the French military is feared and respected.  In either case, it just isn’t so.

Let’s talk coaching.  Bret Bielema is one of the youngest coaches in the Big Ten, but he has been able to carry on the legacy started by Barry Alvarez.  He has a 2-2 bowl record, recruits well, and consistently has Wisconsin in the top 20.

Save for a road tilt with Iowa, they have the rest of the top competition at home, and they play as well on their home turf as the Army of Northern Virginia did, circa 1862.  They have the most overall experienced team in the conference coming back, with the foundation of a senior quarterback and a running game that will make you cry ‘Uncle’ quicker than being forced to watch a Ben Affleck movie.

B. Why You Should Not Get Emotionally Invested

When I was a helicopter pilot in the Army (oh Jesus, here we go) we deployed December 23, 1995 for a Peace Enforcement Mission (oxymoron, no?) in the former Yugoslavian Republic of Bosnia-Herzegovina.  There were two CH-47D Chinook companies in Europe, so the conventional wisdom was that we would be down there for 90 or 120 days, then the other unit would rotate in and we would go home.  We talked ourselves into that every day, wanting to believe it until it became fact, at least in our minds.  In early February our Brigade commander came for a visit and a ‘pep talk’.  He called us all into our makeshift hangar and said "boys, your deployment orders were for one year, and you’ll be here one year minimum.  The other guys are gainfully employed elsewhere, there is a significant vertical heavy lift requirement here, and you’re the only game in town.  As a matter of fact, don’t hang your hats on coming home in December."

Had hari kari been an acceptable practice in the United States Army, there would have been no heavy lift vertical presence in and around Bosnia the next day, as we would have eviscerated ourselves right in our tents, drunk on sake.  And that’s Wisconsin football, in a nutshell.  Every year we talk ourselves into great things about this team, and then there’s something so out of the blue that happens you want to gut yourself like a fish for ever cheering for this team.  And then you drink yourself blind on Leinenkugel's Sunset Wheat.

Under Bret Bielema Wisconsin is one of those teams that, for whatever reason, loses a game they shouldn’t, or just doesn’t show up for a BIG game…EVERY YEAR.  And then they either can’t get past that game and lose one or two more, or they completely implode.  Earlier I asked why Wisconsin was playing in the Champs Sports Bowl, and not the BCS.  Well, this is why.  Last year, they walked into Ohio Stadium and just gave them the game to Ohio State with three return TD’s (2 interceptions and one kickoff).  They looked to be suffering the after affects of that game when they lost at home to Iowa the next week, and then spit the bit against Northwestern a few weeks later.  In 2008, they lost to the worst Michigan team in 40 years, and then went home and let Ohio State freshman quarterback Terrelle Pryor lead a fourth quarter drive to beat them in the final minutes.  They lost four straight before they righted the ship, and then got blasted 42-13 by an average Florida State team in their bowl game.  In 2007, a #5 ranked Wisconsin team lost at home to an unranked Illinois team, and then seemed disinterested while getting blasted at Penn State the following week.

But if it’s ever going to be different, this is the year, and this is the team.  Climb the mountain, boys.