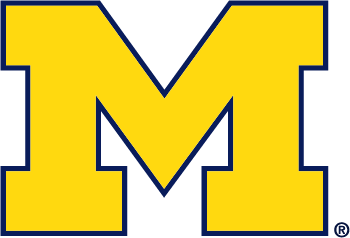 At Michigan all hearts are true/All loyal to the Maize n' Blue.

Now, I'm no lawyer. But being a Michigan fan for the past two years, I certainly know the definition of cruel and unusual. In the Rich Rodriguez era, the Wolverines have had the two worst seasons in the history of this proud program, overall having gone a woeful (8-16) with a conference record of (3-13). And things don't appear to be getting much better: the defense, after finishing 85th in the nation in scoring last season, returns this season having lost its four most productive players in DE Brandon Graham, DE Stevie Brown, CB Donovan Warren, and now, with a season-ending injury, CB Troy Woolfolk. With Woolfolk's injury, along with a bizarre twist of defections and non-qualifiers, there is literally nobody with non-garbage game experience (and, some may argue, talent) to play CB for the Wolverines this season. Ranked towards the bottom of the Big Ten in almost every national preseason poll, nobody is expecting the Wolverines to do much this season. 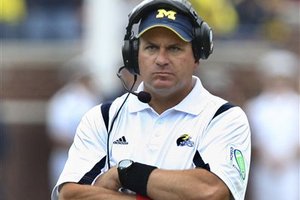 It's clearly do-or-die for Rodriguez as he enters his third season with the Wolverines, and we certainly don't have the momentum. After winning the first four with true freshman Tate Forcier at the helm, including a riveting late game comeback against the once-again overrated Fighting Irish, Michigan began a precipitous slide in which we lost every game (I don't include Delaware State here), including an embarrassing 30-13 shellacking by the Zooker, who's seat is the only one hotter than Rodriguez's entering this year. It wasn't a restful off-season either, with the first NCAA investigation in school history, a solid recruiting class that was overshadowed by a top flight recruit with a checked legal past (who, along with two other recruits, ultimately did not qualify), and, most recently, the crippling blows to our secondary. The Wolverines have their work cut out for them this season.

One word, however, describes my feelings toward this season for my beloved, beleaguered Wolverines: Intrigue.

In its third season, the Wolverines finally have the pieces in place to make this offense, you know, work. As history has shown, when Rich Rod doesn't have a QB that fits his system, he simply doesn't win. For exhibit A, see his entire career as head coach at Michigan. For the majority of last season, the Wolverines had about .75 of a quarterback available to run Rich Rodriguez's spread offensive system: pass-first QB Tate Forcier was playing with an injured shoulder sustained in game 3, and Denard Robinson received only two weeks of training prior to the season in how to be a QB. Did I mention both were true freshmen? Even with lack of experience (and bodies) at the most critical positions, an injury to key offensive lineman C David Molk, and an offense that is only in its second year, the Michigan Wolverines still managed to be 4th in the Big Ten in scoring offense with 29.5 points per game. 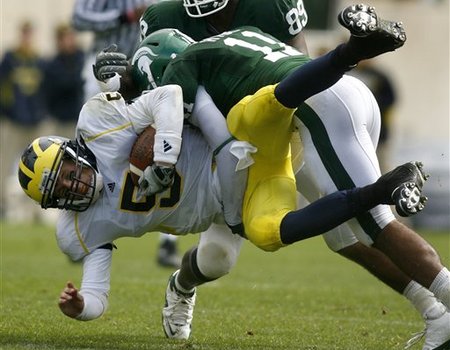 However, the Wolverines enter this season with not only experience, but depth (!!!) at QB, the most important position in Rich Rodriguez's offense. Last season, Rich Rod only put Denard Robinson in when he wanted to throw an interception. But with a full season and offseason of QB tutelage under his belt, Robinson has impressed in the spring and by all accounts has emerged as the starter over the incumbent Forcier. Having acquired the finer points in quarterbacking (like *handoffs*), Robinson is now minimally equipped to harness his raw athleticism, hopefully making him the dangerous big-play threat this offense has desperately been lacking. And after the early enrollment of the talented 5-star RR Prototype QB Devin Gardner this spring (who is impressing at camp, and deemed by many as too talented not to play this season), the Wolverines enter the season with 3 (!!!) viable QB's to run this offense. With a very experienced and deep offensive line that Rittenberg ranks them third in the Big Ten, and dangerous pint-sized players at every skill position, we may very well see the Rich Rodriguez offense fully unleashed this season. 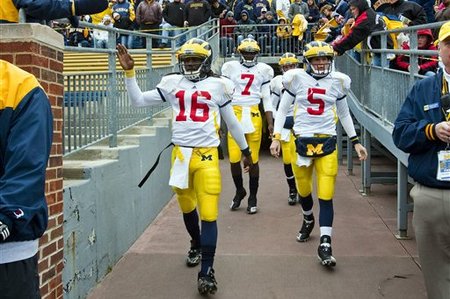 Intrigue... This season should be interesting: this team has the ability to put up 35 points a game, but also to let in anywhere from 20 to 120. This ain't your daddy's Michigan football, friends. We are going to have to outscore opponents; but we have the tools to do so. And you can bet your bottom dollar that Rodriguez is going to pull out all the stops with his career on the line. The consensus is that this is Rich's last season at Michigan unless he finishes with a winning record. He must do this by winning the games he's supposed to win (like, oh I dunno, the '09 Illinois team, '08 Toledo, '08 Purdue, Michigan State both years), and some of the one's he's not. This is what makes college football special, friends. The tradition, the excitement, the pageantry, the rivalries, the intrigue. It's drama unfolding in front of us, the future of one of it's longstanding icons, Michigan football, hangs in the balance.

Will this be the season that we finally see a productive Rich Rodriguez offense? Can a team function without a secondary? Will the Wolverines rise again? Is this Rich Rodriguez's final season at U of M? Time shall tell, my friends.

II. Factual Summation, or Discovery, As Barristers Might Say.

Here's some of what we've written about the Wolverines in the offseason.

Besmirched Reputation In Tow, Where Does Rich Rodriguez Go Now?

If History is Any Indication, Michigan May Be Back Shortly

What To Know About The Michigan QB Battle

Summation: Michigan in the Aughts

B. Rick Astley Says: I'm Never Gonna Give You Up

I'm sticking with you through thick and thin, Michigan. We're no strangers to love.

A. I Hate Michigan

And granted, there are many of you out there. But I think I can safely say that even the haters out there are tired of stomping us. I suppose it's no longer fun, but has become... sad. I cannot stand pity, I'd rather you hate us with the fires of a million suns than to feel sorry for us. You want Michigan to rise again, so that you can actually feel good about beating us. Right now it's like fighting Floyd Mayweather when he's in a coma. You win, but you don't feel good about it. Wouldn't you rather beat Floyd Mayweather when he's conscious? I know I would.

B. I Love Michigan

I know where you're coming from, friends. For the last two seasons, watching Michigan football was like making an appointment to get my heart ripped out; we knew it was coming on Saturday afternoon, but we had to watch because maybe, just maybe, they might eke out a win. So why do it to yourself again, if everybody is expecting the same? Because that's the beauty of college football, Michigan faithful: anything can happen. We must be there for the joy and the pain, because that's love, D-Bone. That's love.

A. The Staff Calls The Games