"Emotion is highly overrated in football. My wife Corky is emotional as hell but can't play football worth a damn."

The Fighting Illini have been here before. There was the Rose Bowl in '83.  There was the shared Big Ten crown in '90. This century, there was the shocking 2001 league title and even more surprising run to the Rose Bowl in 2007. Unfortunately, the season after three of those four great years, Illinois missed a bowl game. And after the 2001 triumph, the program began a nose dive that has resulted in only one winning season in the past 8 (the aforementioned 2007 team). While the 2008 team seemed a play or two short of being decent, last year's squad appeared rudderless. And now, they may have a coach who has one year to save his job - but may not have the squad to do it. 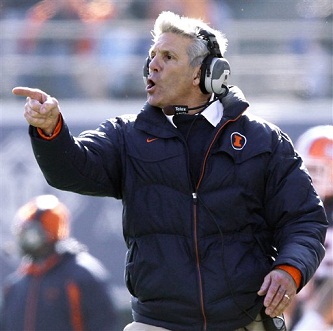 Ladies and gentlemen of the jury, we love sports. And the reason that we do, is because on any day - if it's the right day - a team can rise up and be more than itself. On any play - if it's the right play - a team can overcome a more powerful foe. And in any given season - if it's the right, special kind of season, a team can come out of nowhere to shock the world and win the league. That, my friends, is why we love sports. An no team, and I say this without the hint of exaggeration, NO TEAM better exemplifies this than the Fighting Illini of Illinois. Nothing is impossible for them. In the last ten years, no other team in college football has both gone to two BCS Bowls AND won 3 games or fewer five times. That is the beauty of sports. That is the beauty of the Illini. They can run the right play, on the right day, and have the special and right season. Or they can lose ten games.

A. Pop Music Teaches Us

Because all blogs are required to compare athletic teams to some random entertainment icon, we're equating Big Ten Teams to famous pop artists.
It wasn't my intention to mislead you
It never should have been this way
What can I say
It's true, I did extend the invitation
I never knew how long you'd stay
Bit by bit
Torn apart
We never win
But the battle wages on
For toy soldiers
h/t to Bama Hawk Girl for identifying Illinois's tendency to "All fall down."

Here's some of what we've written about the Illini over the off-season:

A look back at a very unusual last decade

A few words on Corey Liuget

I challenge you to define this team. For the past four years, this was Juice Williams's squad. That was a blessing and a curse. The successes and failures of the team almost perfectly mirrored the successes and failures of Juice. Nathan Scheelhaase takes over now. The hope is that leads to more consistent results. Evryone is saying all of the right things for August. The hope is that they're doing the same thing in October. Absent a proven running back and proven wide receiver (which partly explains former starting QB Eddie McGee's move to the position), it may take some time for the offense to get going in new OC Paul Petrino's system. We're all assuming that it will be a pass-happy set. It will be interesting to see how a young quarterback handles that much responsibility that quickly.

On defense, the Illini were poor last year.The good news is that expected leader Martez Wilson should be back to full strength after missing 2009. The bad news is that expected starting strong safety Supo Sanni just found out that his next action will be in 2011, after a rupturing his Achilles tendon. New DC Vic Koenning is charged with building a defense, but it won't be easy. It's reasonable to hope that they'll take a step forward with improved coaching (Koenning did a solid job at K-State). It's hard to know how far that improvement gets them. They have a long way to go from 2009's performance before they can think about challenging in the conference again. 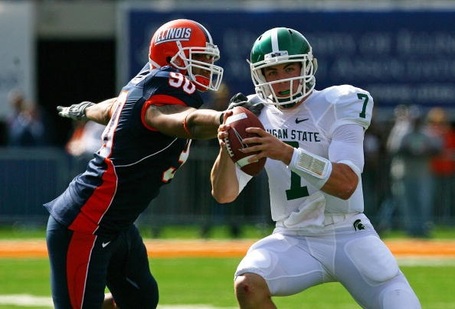 The schedule is kind enough to keep Illinois from having to face Wisconsin and Iowa. However, dates with Penn State, Ohio State, Michigan State, Missouri, and Northwestern all loom as likely losses. Two tricky non-conference games (at Fresno State and vs. Northern Illinois) don't help the team's chances of returning to a bowl game.

It may have seemed like I was being hard on Illinois during the Argument. It turns out, I'm higher on the Illini than almost anyone else on the staff.