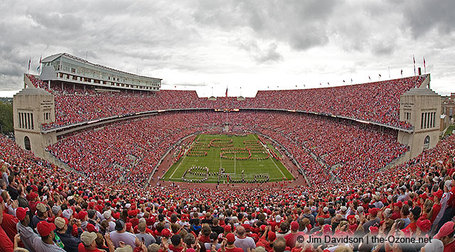 Anyone passing through Columbus on Interstate 315-N can't help but stare at the concrete and glass silhouette of Ohio Stadium, towering over the muddy banks of the Olentangy like an ancient armory.  It is the heart and sole of a city that lives for the athletes that battle inside.  In 88 years the Horseshoe -- as it is lovingly referred to by locals -- has witnessed six undefeated seasons, 31 conference championships, 373 thrilling victories, 103 devastating losses, and 20 ties.  It is home to the incomparable (Script Ohio), the invincible (1942, 1954, 1957, 1961, 1968, and 2002 national championship teams), and the immortal (Paul Brown, Woody Hayes).

Anyone who stands at midfield on the Block O can feel Buckeye ghosts and legends from the past.

The Stadiums of the Big Ten:
Michigan State
Minnesota

The Buckeyes haven't always called the Horseshoe their home.  From 1890 to 1898 the scarlet competed on a vacant lot just east of historic German Village in present day Schumacher Place.  If you walk down Whittier Street today next to the Giant Eagle you'll see a historical plaque commemorating the program's roots.  In 1898, the Buckeyes moved to Ohio Field, a brand new 5,000 seat stadium with iron gates and modern bleachers on North High Street, between 17th and Woodruff Avenues.  In 1907, the installation of an upper deck expanded the stadium's capacity to 14,000, however, it wasn't enough to contain the throngs of crowds that flocked to see Charles "Chic" Harley, Ohio State's first All-American. 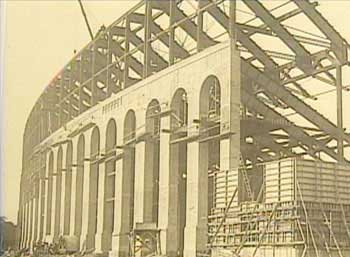 This 1921 photo of the stadium under construction shows the open column design.

Harley's success at Ohio State spawned the popularity of football in Columbus, and the faculty soon decided to build a new complex to house the budding program.  For this reason, Ohio Stadium is often called "The House that Harley Built."  The university hired local architect Howard Dwight Smith, who spurned Yale Stadium's (and later Michigan Stadium's) bowl design in favor of a double-deck Horseshoe.  As Wikipedia reports, "Smith employed numerous revolutionary architectural techniques while building the stadium. At the base is a slurry wall, to keep out the waters from the Olentangy River. The stadium sits on the flood plain, giving it a precarious, but beautiful setting."  Additionally, Ohio Stadium was the first to use an overlapping deck system and double columns that allow for a more open exterior.

At the north end of the stadium Smith inserted a grand rotunda designed to look like the dome at the Pantheon.  Present day visitors to the closed end are treated to a colorful series of stained glass murals portraying famous Buckeyes.  Perhaps the thing that most sets the facility apart from other venues is the attention to details.  Handsome copper draping accents run the length of the interior wall above the grand architraves and yellow and blue flowers line the entire ceiling of the dome at the north end.

Surprisingly, the color of the flowers is rumored to be a nod to the University of Michigan who defeated the Buckeyes 19-0 on dedication day.

The stadium was completed in 1922 by E. H. Latham Company of Columbus at a construction cost of $1.34 million and a total cost of $1.49 million.  It was the largest poured concrete structure in the world.  The stadium originally sat 66,210.  As one source notes, "[s]keptics scoffed at the thought of a 66,000-seat venue, but they were quickly quieted when an overflow crowd of 71,138 showed up for the dedication game."

The Buckeyes led the nation in attendance 21 times from 1951 to 1973.  Since 1949, Ohio State has never been lower than fourth nationally in average home attendance.

As the years passed, the seating capacity was expanded piece by piece until it exceeded 90,000.  During extensive renovations from 1999 to 2001 the press box was replaced, additional seating was installed along the upper deck, and 81 luxury suites and 2,500 club seats were added.  Additionally, the track was removed and the field was lowered 14.5 feet to accommodate new "eye level" seating.  Finally, the temporary bleachers in the south end zone were replaced with a permanent 17,000 seat structure.

After the 2006 season the natural grass surface was replaced with P.A.T., a "grass-like" surface with a state-of-the-art draining system. 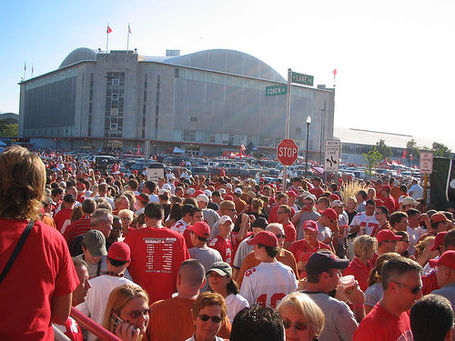 Like most major programs, tailgating at Ohio Stadium is serious business.  Rows of pickups and trailers begin clogging the campus exits off 315 as early as 3:00 a.m. before major matchups.

As I wrote last month in a piece about Big Ten tailgating traditions:

As far as I'm concerned there are five ingredients to a successful tailgate on the banks of the Olentangy.  In no particular order: 1. City Barbecue beef brisket (pink with extra bark), 2. A keg of CBC's Apricot Ale, 3. Chocolate and peanut butter "Buckeyes," 4. A box of Padron 5000 cigars, and 5. Satellite television.

DO: Park in the Victorian Village; Show up early for a mimosa before the Gameday taping; Save your seat at St. Johns for The Best Damn Band in the Land's Skull Session; Rent a private Port-a-John (the lines by the French Field House take forever); Show up even if you don't have tickets; Smile at the Rose Bowl Committee "green jacket" members; Take a picture in front of the Ohio Stadium Rotunda.

DON'T: Take I-315; Wear a Notre Dame jersey; Plan on getting out of town quickly after the game. 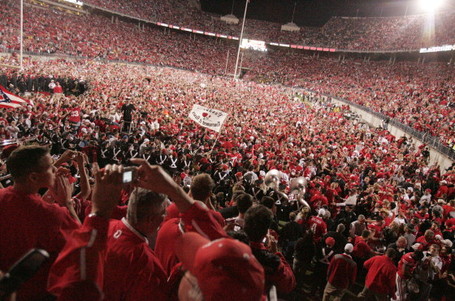 The Horseshoe is consistently ranked as one of the nation's 10 Toughest Places to Play College Football.  Visiting teams are greeted by a rogue legion of some 105,708 angry, Columbusites, buoyed by an extended pre-game period of nervous diffusion and tailgating.

I've heard the acoustics inside the stadium compared to the inner workings of a jet engine.  On third down the decks groan under the weight of a high-pitched hail storm.

As one source offers, "[t]hat support has transitioned to the Buckeyes play on the field...All-time, OSU has won nearly 77% of its games played in the "'Shoe," including 89% since 2001."