To the Nines - A New Era of Big Ten Schedules

Share All sharing options for: To the Nines - A New Era of Big Ten Schedules

One of the few pieces of news to come from the Big Ten Media Days (because really, what else did we not know already?) was that the conference is very serious about pursuing a nine game league schedule - in addition to the Big Ten Championship Game.  While the Champinship Game will start in 2011, the nine game schedule wouldn't kick off until 2015 (so that teams can fulfill non-con obligations).  How would a nine game schedule work? Why would the Big Ten want this? Who would get hurt (hint: the biggest losers may be two non-Big Ten teams)? Let's see if we can get some of these questions answered:

Why would the Big Ten want this?

Which game will draw bigger ratings (and bring in bigger ad fees): Purdue vs. Northern Illinois or Purdue vs. Illinois? Eastern Michigan at Penn State or Michigan at Penn State? If the Big Ten can have an extra 6 conference games to shop at premium value, that's a boon to the coffers.  Yes, that means 6 extra losses for the league, but that's a problem for coaches, and coaches aren't calling the shots here. Also, this helps Athletic Directors keep costs down. There is no payout for a conference game. As an example, Iowa will pay $800,000 for Ball State to come to Iowa City to (presumably) lose in late September. That's $800,000 that can go to the women's diving (or baseball, or track, or...) team if Illinois visits instead. Yes, a nine game schedule may make it more difficult for a Big Ten team to run the table, but it may make it cheaper to do it too.

How would this work?

Truth is, you can't explain a nine-game schedule until you establish divisions.

Fine. Then what will the divisions be?

I don't know. No one does. We all have opinions, and mine isn't any more right than yours. But I'm going to assume that it is anyway.

If the Big Ten is looking at nine game schedules, the permanent rival approach makes even more sense. Using that a foundation, the first focus must be upon competitive balance.  Jim Delaney said that the league will be look at 1993-present as its timeframe. Perfect. In those 17 seasons, there have been 4 schools that won (or should have won - 1994 Penn State) national championships. Split them evenly. 6 teams with winning conference records and 6 teams with losing conference records. Let's continue the splits there. 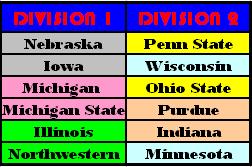 With this split, you have Ohio State and Penn State as the anchor tenants of one division and Michigan and Nebraska as the anchors of the other. Iowa and Wisconsin, the other two teams with winning records, are split. The last six are divided as well. For 2011-14, each team will play it's five division opponents, it's cross-division rival, and two teams from the other division.

As you'll see, the schools are in pairs. That makes for very nice games at the end of the season. Iowa/Nebraska, Minnesota/Wisconsin, Ohio State/Penn State, battles for state bragging rights in Michigan, Illinois, and Indiana. Now I know that by moving the Michigan/Ohio State game off of the final weekend, there will be some who say that I've done irrevocable harm. Frankly, I think we're going to see it happen. Coach Tressel said as much in his Monday presser.  You wouldn't want a cross-division game in the last week only to have a rematch seven days later. I have to think that the possibility of a Big game rematch every couple of years should be enough to justify moving the date of the game. And yes, I do think that the Big Ten likes the idea of Michigan and Ohio State playing twice.

One note about basketball: I suspect that the league will try to keep Indiana and Purdue in a situation in which they will play twice a year. Even that is a luxury, not a necessity. Beyond that rivalry, there are no considerations that will be paid to basketball.

So anyway, I'm now on record with all of the others as to my division preference. Make no mistake, I do not believe that this is ideal for an 8 game schedule. Losing an annual Iowa/Minnesota game is a bad idea. However, if we're moving to a nine game schedule, I believe that this makes perfect sense. So let's look to 2015.

So how would a nine game schedule work?

You'll notice that some of these second permanent rivals are long established matchups (like Ohio State-Illinois and Iowa-Minnesota). More important is that each team will play one opponent from the other division that has a winning record and one team from the other opponent with a losing record. In that way, you're not "punishing" the good teams by only matching them against the other good teams. As an example, here's how Penn State's schedule might look from 2015-18:

So who gets hurt in this?

No one in the conference. Teams should have better games with fuller stadia (where attendance is an issue). The problem will come in non-conference scheduling. As you look at Penn State's mock schedule above, you'll see that they have five conference home games in the odd years and four conference home games in the even years. If Penn State wants to get to 7 home games in a season (and have no doubt, each team will want the revenue of seven home games), that means that they can't have any non-con road games in the even years. Accordingly, I expect that Penn State will schedule two patsies each year and have one good series with a home and home (this year's matchup with Alabama is a perfect example). A nine-game schedule should have little impact on the Penn State non-conference slate.  However, teams like Iowa, which traditionally play two-BCS opponents in home-and-home series in the non-conference schedule, will be unable to continue to do so. There's room for one non-con road game only.

And that's where some Big Ten teams will have to make some tough choices. Purdue and Michigan State (and most of the time, Michigan too) play Notre Dame every year. Are the Boilers and Spartans going to want to lock in to never playing any other BCS-level opponents in the non-conference schedule? And what about Iowa? One of those BCS opponents has been Iowa State (every year since 1977). Is Iowa going to give up playing Arizona, Pitt, Arizona State, and Syracuse (as they've played this decade) to keep playing a game to prop up their little brother? It could well be that in 2015 the big losers will be Notre Dame and Iowa State.

But be clear, if the Big Ten can go through this much upheaval and have the only losers be two schools from outside of the league, then it will have done a masterful job.