Recap of the Forcier Situation and Thoughts: Can the Run Spread Work in the Big Ten?

Share All sharing options for: Recap of the Forcier Situation and Thoughts: Can the Run Spread Work in the Big Ten?

Because this website isn't focused on one single school, I wanted to go over last weeks news about Tate Forcier in case you a) cared or b) missed it. In a story that pretty much just supported what I'd been hearing all summer, Michigan's veteran cornerback Troy Woolfolk claimed that Tate Forcier wasn't working very hard this summer and wasn't being the leader this Wolverine team needed. Woolfolk apologized, claimed the comments were out of context and that he supports Forcier totally. From the original post:

According to Woolfolk, what was once a neck-and-neck race between Forcier and Robinson for the starting quarterback job has begun to tip in Robinson's favor. And a big reason for that, Woolfolk said, is the team's perception of players who don't show up to voluntary workouts.

I've been calling for Denard to start since Michigan lost its last game in 2010. The only way the run spread truly takes off is with a fast quarterback, otherwise the defenses don't respect the zone-read fakes. So I've been pretty happy hearing reports during the summer that not only was Denard's throwing accuracy (MIA last year) improving, but he was surpassing Forcier to be the starter. This latest piece of "my quotes about Tate were taken out of context" discussion only supports the idea that Denard will be the guy in 2010. 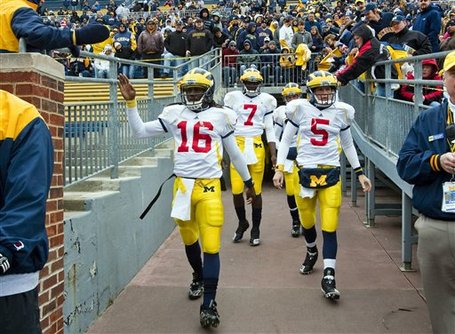 But that's week old news. The follow up discussion, one we've never really had on TRE, has to do with the Run Spread, Rich Rodriguez style. Can an offense that allows a quarterback to get hit this much succeed in the Big Ten? Can 180 pound quarterbacks that look like slot receivers survive 12 games of being punished by 240 lb linebackers? The Big Ten has been a damn good place for LB play recently. Greg Jones, Pat Angerer, basically anyone from PSU and OSU in the last 4 years...These are typically big boys, but they're also sure tacklers and quick enough to play in the NFL. Unless you have a behemoth like Terrelle Pryor who can stiff arm and avoid straight on contact, we've never seen if someone in the mold of Robinson can succeed against some of the nations top defenses.

My thoughts? Good players can make good things happen. A cohesive offensive line plus a lightning fast quarterback plus one more year of experience in the Rodriguez system? That sounds like a recipe for marked improvement. But Michigan's schedule (ND, PSU, OSU, Wisky, Iowa) won't make this offensive experiment any easier. We'll make a list of talking points, so you and the spouse can have some good pillow talk tonight:

Signs That The Rodriguez Spread Will Work