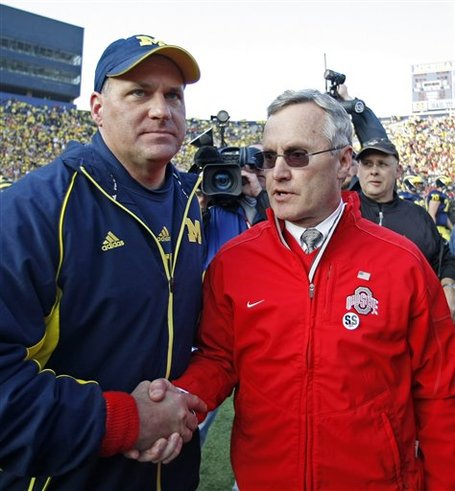 The headlines may say "Big Ten splits Ohio State/Michigan," but the Commissioner and the Athletic Directors preserved what really matters.  That, of course, is the maintenance of The Game in its rightful place on the last day of the regular season.  When talk of an alternative October date surfaced several weeks ago, the fan and alumni response was predictably distraught.  Although Jim Delaney said tonight that the conference never actually studied an October date for The Game -- it looked instead at a mid-November home for its most famous showdown -- it's clear that the fan consensus weighed into the decision-making process.

I think it's a positive signal that the front office is truly interested in doing what's best for the students, fans, and alumni that drive revenues.  Rather than walking the plank of public opinion, the Commissioner and the Athletic Directors introduced a rational, orderly, and intelligent divisional scheme that -- if not perfect -- at least reflects an attempt to juggle competitive balance, rivalries, and geography -- in the stated order.

As ESPN leaked earlier here are the official divisions:

Inevitably, there will be some who continue to be miffed by the league's decision to separate the Buckeyes and Wolverines.  I think that splitting the baby was a necessary evil to avoid a greater faux pas: banishing our easternmost fixture (Penn State) to a division largely comprised of western programs.  As an ancillary benefit, separating Ohio State and Michigan ensures that the programs can continue to battle for the Rose Bowl, as they did in the 1970s in the period affectionately known at the 10 Year War.  As Bama pointed out last week, the risk of back-to-back matchups is a once in a decade proposition at most.

Sure the nostalgic may continue to bemoan the loss of the "tradition," but many of these fans are the same people who carried the torch for expansion when the conference announced last December its intention to study bringing new teams on board.

If you're one of the few traditionalists who opposed expansion, then I have no problem with the argument that the league has violated its most sacred covenant. But if, more likely, you applauded the addition of Nebraska, only to now appeal to some rigid adherence to the status quo, you're guilty of failing to see the forest for the trees.

With expansion, change is inevitable.  Don't blame the Commissioner for your own nearsightedness.