Michigan vs. UConn Offensive Analysis, Looking Ahead To ND

Share All sharing options for: Michigan vs. UConn Offensive Analysis, Looking Ahead To ND

After watching that Meech game last Saturday, you might be saying to yourself "Holy hell, where did that offense come from? Denard Robinson can throw?!" I hate to say I told you so, but, well, I did.

So what did we learn, and what would I like to see going forward? Here are my general impressions, offensively: 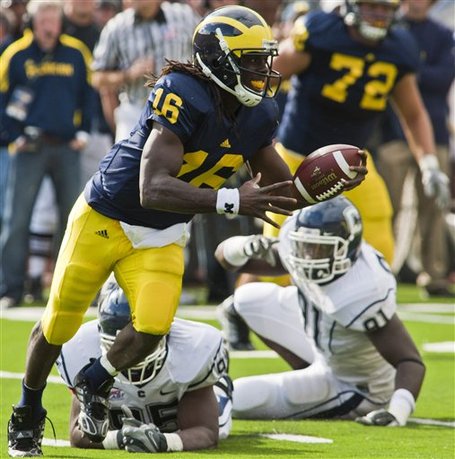 First and foremost, we are finally beginning to see the offense that made Rich Rodriguez so successful at West Virginia. In case you missed it, against UConn Denard Robinson rushed for 197 yards, the most in school history by a QB. And this is only the first game of the season. What impressed me the most about Denard, however, was his ability to make accurate passes. As Rich Rod stated, since we were running the ball well there was no need to throw, but still, Denard's statline throwing the ball was impressive: 19/22 for 186 yards, 1 TD.

What concerns me is what concerns most Michigan fans: is a 195 lb QB able to carry the ball 29 times per game and remain healthy all season? Against corn-fed Big Ten linebackers, my answer is almost certainly no. What was most troublesome to me was that the coaches continued to call Denard's number, even in situations where it was unnecessary for him to take shots; several third-and-shorts come to mind. If I'm an opposing D Coordinator, I am trying to put the hurt on this kid, bad. Calvin Magee needs to find ways to spread the ball around a little more to minimize these hits on Denard, or he won't five games. Heck, he barely lasted one, getting tossed around like a rag doll against a middling Big East team. If this keeps up we may see true freshman QB Devin Gardner taking on a greater role sooner than some of us may like.

Though his short and intermediate passes were spot on, what I'd like to see out of Denard against ND is his versatility throwing the ball: can he throw the touch pass well? How is his deep ball? Obviously, if you don't need to open up the playbook in the first game, why would you? I expect to see a little more razzle-dazzle against ND this week.

The group truly responsible for Denard Robinson's record setting day running the ball, however, was the stellar play of our offensive line. This is our strongest position group for sure, and they showed it against UConn. Kudos especially go to Mark Huyge, who has improved vastly since last year, as well as to Pat Omameh who is really embracing his starting role. RT Perry Dorrenstein is the weakest member of this group, with several missed assignments and unsustained blocks that were glaring. I wouldn't be surprised to see RS Freshman Taylor Lewan get some time at RT against ND. But overall, extremely solid play by the offensive line. ND's defense should be a slightly greater challenge for this line, but the Adrian Clayborns and J.J. Watt's loom large in the future. UConn's defense was sitting in its base formation with few stunts and blitzes, so I'd like to see how this line responds to an aggressive defense as well.

Against UConn, the diminutive So RB Vincent Smith continued to build on a strong performance last year. Despite his great day with the ball in his hands (one TD rushing, one receiving), I think where he really shined was in his performance blocking against UConn. To see a 5'6 guy effectively block a 6'2 safety is a thing of beauty. I've cooled on Jr RB Mike Shaw considerably. Though he runs with power and speed, he still shows the same bad habits that got him yanked last year: dancing around laterally in the hole, showboating, trying to do too much with the ball. I'd like to see the 227 lb true freshman RB Stephen Hopkins get a few touches against ND, especially in those third and short situations. He had a good camp, let's see what the kid can do.

Not much to say about the WR's and SR's in this game. Is former point guard Kelvin Grady really the best SR we've got? He's reliable catching the ball, but not a playmaker after the catch like a Martavious Odoms or a (reportedly) Jeremy Gallon. 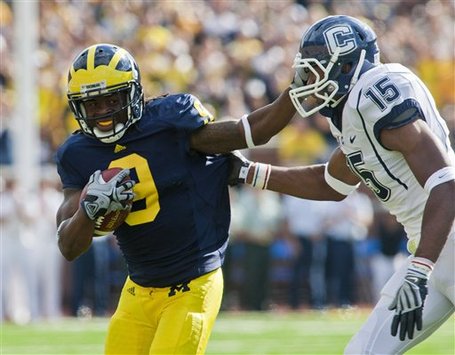 In conclusion, though the offense looked great against UConn, I still approach ND with cautious optimism. My readers will recall that we started out hot last year, winning our first 4 before it all went to hell in a handbasket as soon as we entered Big Ten play. I have yet to see anything yet that makes me think otherwise, especially if Denard Robinson gets injured. We shall see. Your thoughts, oh faithful readers?