Ladies and Gentlemen, the Empire that is the Big Ten expands in an omni-directional Manifest Destiny today.  The marquee games have Ohio State trying to hold serve against Miami, Michigan travelling to South Bend to quell a Catholic Rebellion, and the Army of the Potomac invades the Heart of the Confederacy.  Every team except Indiana is in action today, and a Big Ten game is on TV for approximately 12 consecutive hours.  Minnesota, Illinois, Northwestern, Wisconsin, Purdue, and Michigan State all have games they should win comfortably.  And finally, Iowa plays for the Cy-Hawk Trophy against Iowa State.  The Cy Hawk isn't as ugly as the Land Grant Trophy, but nonetheless, it's still a trophy only an Iowan can love. 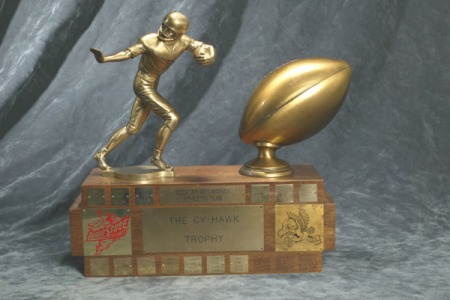 So you're telling me it ISN'T a bowling trophy?  Huh, good information to have.

The Sun never sets on the Big Ten Empire, and after today's smorgasboard of Football, we'll Hurt...So... Good.  Take it away, Mr. Cougar Cougar Mellencamp Mellencamp:

You ain't as green as you are young, Penn State.  Get it done, or I am essentially out of the Obligatory Predictions competition, and it's already week 2.  So this is what it's like to feel like Vanderbilt football.

Schedule grid after the jump.  Enjoy your Saturday, in front of the TV and here on OTE!

Have you submitted your OPC Predictions for this week yet? Go here to do so. Do you believe FSU can snap Oklahoma's home win streak with a healthy Christian Ponder? Do you think a talented Michigan team can run past Notre Dame with Touchdown Jesus watching? Weekly winners get respect, but if you win the overall competition, you get something better than respect, like a hoodie from your favorite team.  But do it now, before it's too late?  Kickoff is right around the corner!!

*Game will be played at Ford Field in Detroit.