The Legend of the Silver Bullets

Share All sharing options for: The Legend of the Silver Bullets

Saturday's showdown was anything but pretty.  Players and fans were soaked by late afternoon showers that matted the bright artificial turf on the floor of Ohio Stadium and turned tailgating lots into tributaries along the Olentangy.  The Buckeyes allowed 88 and 79 yard kickoff and punt returns for the first time in the program's 121 year history, colossal errors that gave the Canes a 7-3 first quarter lead, and later brought them back into the game after falling behind 10 points late in the second.  Terrelle Pryor misfired on 15 of 27 attempts, and for two series in the first half the offense reverted back into last year's stagnant form.

The only unit that stood tall amidst the chaos?  The defense -- or should I say "the Silver Bullets?"  Ask any Texas, Iowa, Oregon, or Miami fan.  Jim Heacock's unit is the grizzled face of the program, like the coiled rattlesnake on the Gadsden flag with the famous warning: Don't tread on me.  Only for Ohio State it's more like "you can count on me."

When the defense takes the field, we often breathe a sigh of relief.  That's because the "bullets" are a nightmare for offensive coordinators.  Like the Wolf in Pulp Fiction, they clean up the messes made by the offense and special teams.  As Adam Rittenberg reports:

DeVier Posey has been spoiled by Ohio State's defense, and he knows it.

When Posey, a junior wide receiver for the Buckeyes, watches the Silver Bullets do their thing from the sideline, he goes through the same thought process.

"You're just waiting," Posey said. "If we don't get a three-and-out, well, when's the turnover coming? If we get don't get a sack, somebody's going to pick the ball up or we're going to get an interception. When those things don't happen, I'm almost surprised."

On Saturday, the defense held Miami's high profile offense to 10 points.  (The Hurricanes' other two touchdowns were the product of special teams collapses).  The nimble giants up front dissected the Cane's piecemeal offensive line, upsetting the timing on Jacory Harris' pass attempts.  Linebackers Brian Rolle and Ross Homan speed skated between the hashes, burying Damien Berry in a hailstorm of metallic paint and rubber pellets and limiting the loud mouth back to 94 yards on 16 carries. 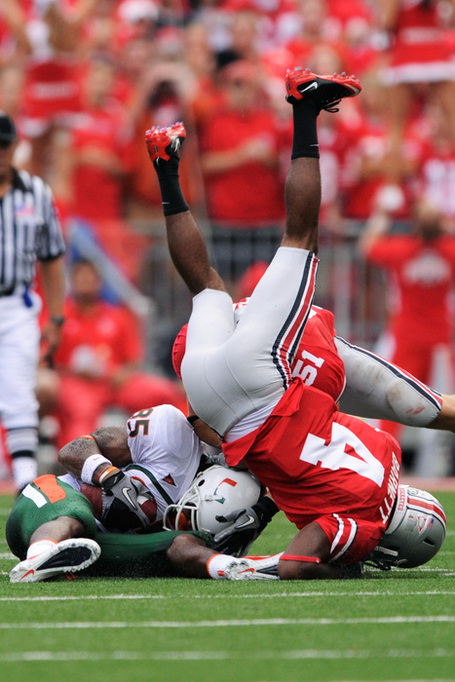 The clear surprise of the day was the secondary, a unit that entered the game with question marks and came out with the gameball, after picking up 3 of Jacory Harris' 4 interceptions, and punishing any receiver lucky enough to reel in an errant pass.

Are the bullets impenetrable?  No.  After building a 16 point lead in the third quarter, Heacock softened coverage to prevent big plays, resulting in Miami's only touchdown drive of the day.  But time and time again, this defense limits offenses to half their season scoring average.

Some call them stingy, others opportunistic.  I call them lethal.

I suspect the Hurricanes would agree.