For Boilermakers, The Whole Still Isn't Greater Than The Sum of the Parts

Share All sharing options for: For Boilermakers, The Whole Still Isn't Greater Than The Sum of the Parts 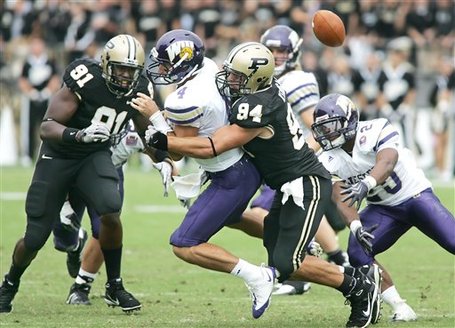 It wasn't all roses, but there was no shortage of optimism in West Lafayette heading into the 2010 season.  As early as February I predicted that the Boilermakers would open the season with a win in South Bend.  I wasn't the only one.

Being bullish about the Boilers wasn't too difficult.  In Danny Hope's first year they lost by the skin of their teeth to Pac 10 Champion Oregon on the road, and knocked off No. 7 Ohio State.  Hope delivered a fast, physical effort and a team that might have been the best 5-7 squad in the history of the sport.  They weren't a finished product (a certain 37-0 loss to Wisconsin comes to mind), but it felt like they were headed in the right direction.  The return of phantom defensive end Ryan Kerrigan, wide receiver Keith Smith, and addition of a former 5-star recruit (transfer quarterback Robert Marve), met that Purdue would have more household names than 2-3rds of the teams in the Big Ten.

So why is it that two weeks into the season fan confidence is down on the Boilers?  I think it has to do with a lack of cohesiveness.  It's not that Danny Hope's guys are playing inconsistent, although they did look like completely different teams in the first and second halves of a 12-23 loss to Notre Dame, and a 31-21 win over Western Illinois.  It's that this is a team that hasn't yet figured out how to play together.

The playmakers are there, but so are the problems.

Marve completed 31 of 42 passes against Notre Dame for 220 yards.  Keith Smith had 12 catches for 80 yards against the Irish.  Ryan Kerrigan and Charlton Williams came up with a safety.  Will Lucas forced a fumble.  Dan Dierking rushed for 102 yards and two touchdowns against Western Illinois.

But the Irish sacked Marve four times and intercepted him twice.  And the Leathernecks rolled up 406 total yards of offense on the Boilers.  The receiving corps took a serious hit when Keith Smith went down with a knee injury Saturday.  (His status remains unknown.)  Plus the offensive line is playing soft, and the linebackers are errant.

It remains to be seen whether the Boilers' overall effort can eclipse the sum of its parts.  The good news is games against Ball State (1-1) and Toledo (1-1) give Purdue time to find its identity before beginning Big Ten play against Northwestern.