So it's Friday afternoon and we are so very close to another college football Saturday.  We've touched on the various tailgating traditions you can find among schools in our conference many times on this site.  Last weekend, I had the opportunity to head down to Tuscaloosa, Alabama for the showdown between my Nittany Lions and the Crimson Tide, and see how they do things down in the Yellowhammer State.

I went in expecting constant SEC chants and chest-thumping, and was somewhat anxious about spending a long weekend deep in what I considered enemy territory.  I've always lived in the Northeast, so I can't comment too much on how Midwesterners treat the other team's fans, but between Boston and Philadelphia and everything in between you see some rough treatment.

Make sure to go back and submit your picks for Week 3 of the Obligatory Predictions Contest. Win the whole damn thing and we send you something amazing.

Any thought of rough treatment was shattered within the first 24 hours of being in Tuscaloosa.  I can say that the Alabama fans were easily the friendliest, most hospitable group of people I have encountered in my life.  Being from northern New Jersey, it actually got kind of weird with people constantly coming up to us to ask us how we were doing, was everyone treating us alright, giving us advice, etc.  So while the game itself may have been pretty ugly, the trip was great.  Hit the jump below to get a run-down of three days in Tuscaloosa (with pictures!). 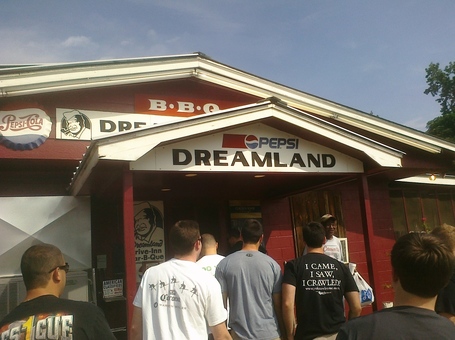 We landed in Birmingham (about an hour from Tuscaloosa) on Thursday afternoon, and rather than head to the hotel first, we headed straight to Dreamland.   Now, this is the kind of place where everybody says "You're in Tuscaloosa? Gotta go to Dreamland."  It's no frills, paper towels and white bread on the table barbecue.  I think they have six things on the menu: Ribs, Sausage, Beans, Cole Slaw, Beer, and Ribs.  In other words, it was awesome.  The sausage was a 10.  The ribs were pretty damn good, but not exactly a 10.  If you like real vinegar, salty sauce, this is for you - not the really sugary/molasses type of sauce you may get at a lot of places. 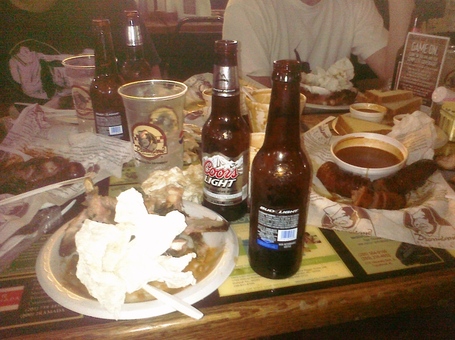 Everything gets all over you and then there is beer.  Pretty sweet.  Man stuff for men.

Thursday night we headed out to see what the night life was all about on The Strip.  The Strip is a pretty typical college town street with bars lining it.  Every person we met had told us to go to The Houndstooth, and we obliged.  We arrived to find out that they had told that to every other Penn State person.  A pretty nice setup for a sportsbar with a lot of outside seating, but with 90%+ of the people wearing navy blue we decided to move along and try to find out what the locals were up to.  Red Shed was nearby and was a good example.  The bar itself was Alabama football-themed and plenty of people were wearing red and/or houndstooth inside.  We were still expecting some animosity from the locals when 10 guys wearing some Penn State gear walked in, but found none.  Everyone was friendly, and we got our first half-dozen invites to tailgates on Saturday.  The fact that we didn't think anyone was "just saying it" regarding the invites was still surprising at that point.  After some time at Red Shed we headed over to Galette's, one of the few places in town with a cover.  I'll let this random website speak for me:

Galettes
Location: The Strip
Ages: 21+
Scene: Make no mistake, it is the Greek's bar. Don't bother going if you are a GDI and just want to be "cool" you will be ignored. best to end up there after going out somewhere else/date party/band party/whatever, everybody always "ends up" at Gallette's. Usually home to the younger Greek crowd, but fratters of all ages can be seen. The perfect place to go and see people you know if you are Greek, you will always run into people. Usually a train-wreck on weekend late-nights (everyone is plastered). A blast on football game weekends, however sometimes visiting fans take over and are obnoxious. Drop by with your parents before a football game (if they don't mind a dirty bar) and buy your mom a Yellowhammer.

Being frat guys ourselves, we were fortunately not "ignored" and enjoyed throwing condescending looks at "GDI's."  Train-wreck: check, blast on football weekend: check, visiting fans taking over and being obnoxious: check.  While another theme of the weekend would be Penn State fans generally being louder and, let's say, more brash than their Alabama counterparts, we also would learn that as long as the measuring stick is LSU fans it's not going to be a problem.

On Friday we had some lunch at Mugshots in downtown Tuscaloosa.  Like the other places we ate, it was the perfect intersection of friendly service and heart attack.  Our waitress invited us to her tailgate: "the one next to the Library with the 47" flatscreen, the cornholes, and the girls in dresses."  We didn't realize at the time that this describes 95% of all Alabama tailgates.  Nine guys went in, seven McDonald's burgers were ordered, and two people left unhappy able to walk.

We made it up to campus that afternoon and got to see GameDay all set up outside the stadium: 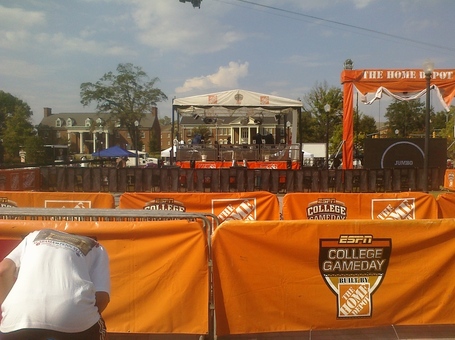 GameDay waslocated sort of on the front steps of the stadium and across the street from the fraternity houses.  Fraternity houses that every one was at least as large/nice as the biggest/nicest at Penn State.  Similarly, Bryant Denny Stadium may be a little smaller than Beaver Stadium, but it is absolutely gorgeous: 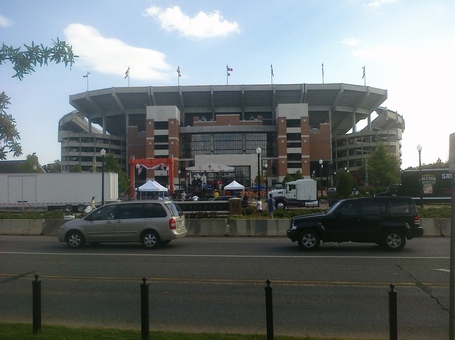 I think they updated that front part just this past year along with the expansion.  When you zoom in on that front-door part (see below) you can see through a huge glass front to the Crimson Tide logo within: 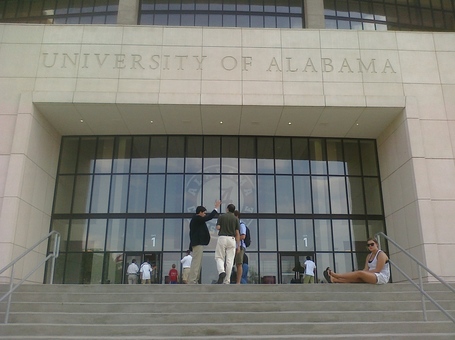 My cell phone pictures don't do it justice: it is awesome.  Kills Beaver Stadium.  So does my garage, but Bryant Denny is a beautiful building.

We then made our way over to the Quad, the main area where people tailgate on gameday.  A huge space normally filled with walkways and trees, on game weekends fans show up Friday afternoon and get their tailgates completely set for the next day.  The school itself also offers a service where you pay them and they set up (and then cater) an amazing gameday spread.  There are a range of packages, but even the starting ones ($2500/season) are impressive.  The first picture below is the majority example (do-it-yourselfers), the second an example of one the school sets up. 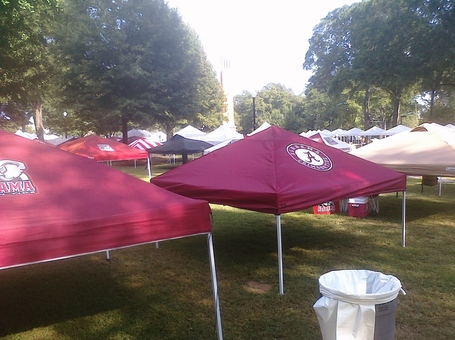 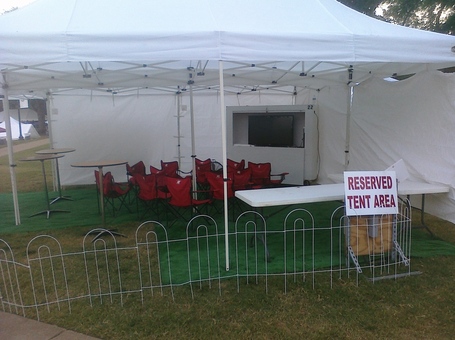 Whereas at Penn State you would drive up the day of the game and use the area adjacent to your vehicle, at Alabama there are no cars/RV's involved (from what I saw), and you have a bit more space.  You also have power outlets available.  Add in an incredibly passionate fanbase, and the results are just awesome: 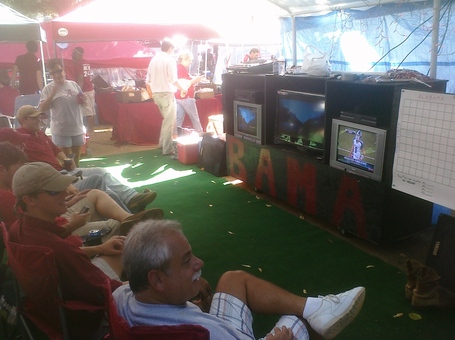 The people in the picture above did not understand why I was taking this picture.  "Ya mean ya whant us ta git up and take hour picture?" (Yes my written Southern accent is awesome)  "Uh, no, just look at the tvs.  I just think your setup is cool.  This will just take a minute.."  (Weird looks all around).

The general attitude at the tailgates is radically different than at Penn State too.  At the majority of the Alabama tailgates you have families getting together, with young kids running around and Grandmas, etc.  It's mostly a relaxing atmosphere with a lot of good food, watching the games, and having some drinks.  The tailgates to either side of us were early-30's couples, some with kids, having a good time.  They invited us over for some food and conversation.  A highlight: 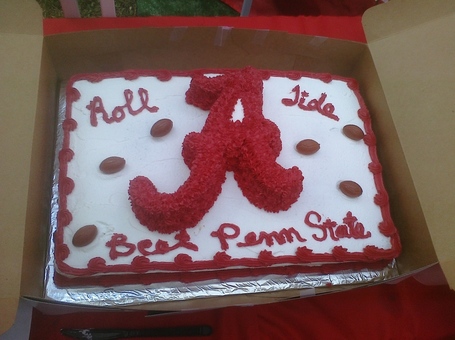 And it was a good thing that they shared their food with us. Because while our tailgate had a canopy, 10 collapsable chairs, a table, and four rolling coolers full of beer....we had two bags of potato chips for food.  The male mind works in strange ways.  Regardless, I can't help but think that the mindset for younger tailgaters at Penn State is a bit more party-oriented.  I hope this bit of a culture clash wasn't too much of an issue last weekend, but I am concerned for next year in State College.

Oh yeah, and the game.  We got tickets the day of, 45-yard line 15 rows behind the Penn State bench: 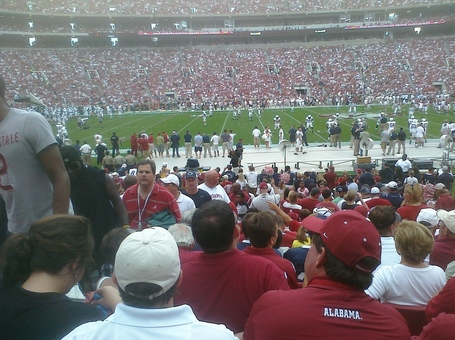 Pretty good spot to be.  Across the aisle were about 30 of the largest high school kids you have ever seen, all the Tide's recruits that had come in for the game.  They were escorted by some very...nice?...ladies in houndstooth skirts, who I would imagine were handpicked because of how...nice...they were.  Nice.  I did flash my Penn State jersey and ask them to "think about it."  Mission: accomplished.

This Alabama game?  Maybe 1 out of 10.  That Alabama offense may not be a 2008 Big 12 offense that shells teams for 50+ points, but I can see it powering out at least 20 against every single team on the schedule.  They are all fast and strong, block well, the runners are phenomenal, and the quarterback just gets the job done.  The defense is young, but they have a ton of talent, and are only going to get better.  Maybe Arkansas is able to get them before they are too seasoned in 2 weeks, but by the end of the season they are going to be dominant.  Our defense is young as well, but talented, and I think by the end of the season they will field a pretty strong group.  The offense has a way to go, but the sky is the limit for Rob Bolden and Silas Redd.  This year we thought it would be rough going in, but at this point I think next year could be a pretty competitive game.

So: thank you to all you Alabama fans we met on the trip.  I was thoroughly impressed with your kindness and hospitality.  It was a great trip, and I only wish there was another one on the schedule so we could do it again.  I know that I will do everything I can to be accommodating for your trip next year, and I am going to encourage my fellow Penn Staters to do the same.  See you in Happy Valley in 2011.