Minnesota, Hats Off To Thee*

Share All sharing options for: Minnesota, Hats Off To Thee* 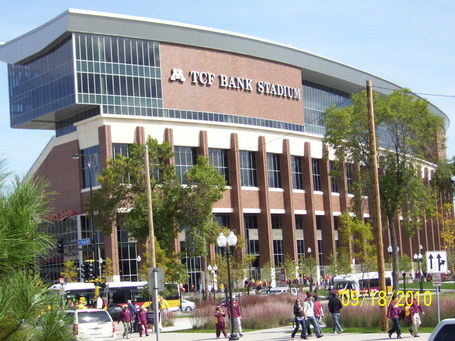 *I'm not talking about on the field

On Saturday, I was able to attend the Gophers-USC game at TCF Bank Stadium.  Other than the, well, outcome on the field, it was a great day to be a Big Ten fan.  The weather was perfect, the location was my hometown, so it was perfect, and, above all else, it WASN'T the Goddamn Metrodome.  Just for that fact alone, it was a win.  But it was Big Ten Football, it was outside, and it was in Minnesota.  My thoughts on the Minnesota tailgating experience after the jump.

The first thing that struck me was that the buzz on the campus around the stadium, like people are still getting to play with a new toy.  In many ways, they are.  Gopher fans are still trying to wok out the kinks, if you will, but there are some definite tailgate hotspots, and overall, it was a great gameday experience.  There aren't a lot of parking lots around the Bank, and the ones that are are reserved for season ticket pass holders.  The Hiawatha Light Rail doesn't have a stop down on campus, either, so go early.  There are a few lots and spots not too far from the stadium, but expect to pay $20, not outrageous when compared to other venues.  I parked just off of University Ave and made my way over to Washington Ave, and found Sally's, which is quickly becoming the pre-game tailgate spot for those who don't bring their own grill and brats. 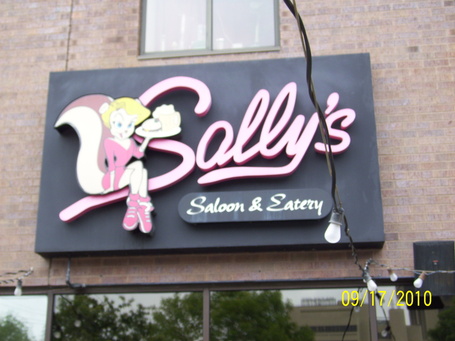 Beer was under $5 for a 16 oz cup (very reasonable), and they have pretty good food.  I highly recommend the Cajun Walleye Tacos with a Leinenkugel's Honey Weiss.  One of the best pre-game meals I've had.  Sally's also has an outdoor patio with beer and burger/brat tents.  It was crowded, but not in a Titanic get to the lifeboat kind of way.  Food and drink was easily accessible, with little to no waiting.  Sally's was well prepared for a big pre-game crowd. 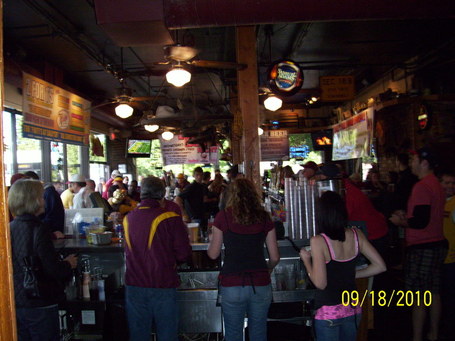 The inside of Sally's a few hours before the game.

Minnesota Nice is still in vogue, and was able to chat up a bunch of Gopher fans, and although there were fans of all ages, it's geared more towards the younger crowd.  Across the street from Sally's is another campus favorite, Stub and Herb's.  That place seemed smaller and more crowded, but it still had a lively pre-game scene.

If you're looking for a quieter atmosphere, you might want to check out the McNamara Alumni center, right across the street from Both Sally's and Stub and Herb's.  The alumni building has an older crowd, but large screen TV's with Big Ten games on multiple channels, nice comfortable furniture, and nice restrooms.  It also has the original entryway to the old Memorial Stadium--very cool.

The stadium itself is a fantastic facility, with wide concourses to accomodate a large crowd of folks.  There are a lot of food vendors all over the stadium, and a 'must try' item is the Ski-U-Brat.  I had the cheapest seats possible, and still had a good view of the field.  The stadium opens up to the Minneapolis skyline, but I had a hard time seeing the skyline because of the ginormous scoreboard with an HD screen blocking the view: 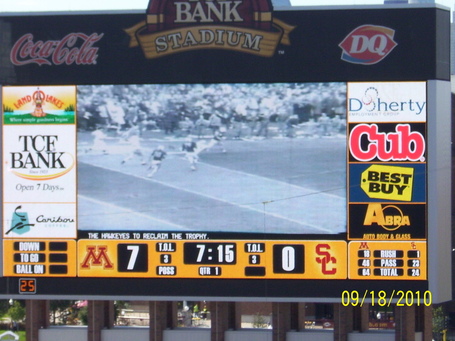 To a person, everyone I spoke to says football back on campus is the best thing to happen to the U in years, and EVERYBODY...let me emphasize this: EVERYFUCKINGBODY, is glad the Gophers are out of the Metrodome.  I spoke to at least seven couples who bought season tickets just because the Gophers were back on campus.  There was one overriding theme, however:  As great as this new stadium and gameday experience is, the Gophers need to produce a winner on the field, or this stadium won't stay filled, and what's building here will dry up and go away like a Gold Rush Ghost Town.  And not a six game go to a crappy bowl winner, either.  Every season ticket holder said, to a person, Brewster (or, after Saturday's game the guy that replaces him) has no more excuses.  The Gophers have a great facility, are building a great on campus experience, and play in a marquee conference.  If Iowa and Wisconsin can compete, the reasoning goes, now Minnesota can.  And they better, or else.

Minnesota is sitting on a gold mine.  Release the Kraken.