[Bama Hawkeye - Bumped because of how many things this column has right.]

Ted Glover of Off Tackle Empire asked "No one expects an Ohio State level, but it’s a legitimate question to ask that if Iowa and Wisconsin can consistently compete at the top of the Big Ten, why not Minnesota?" 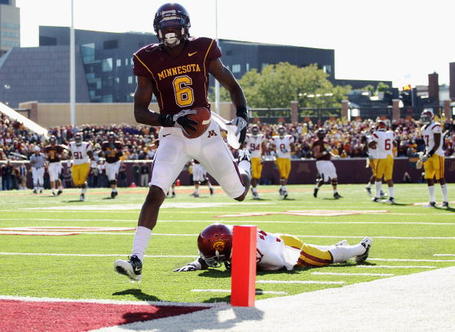 Tough love time.  I'm not going to tell you anything you don't know, but in this case, the whole is worse than the sum of its parts.

Because Minnesota High School football isn't that good, and the best players get cherrypicked by other schools.  Note: Joe Mauer (FSU), Seantrel Henderson (Miami via Kiffykins), and even Lydon Murtha (Nebraska via an ill-fated attempt at using the Barnett Recruiting Playbook).

Because a conference is a closed system.  For every conference win, there is a conference loss.  It's not a coincidence that as some teams in the middle class in the Big Ten have waxed (Iowa and Wisconsin), some have waned (Purdue and Illinois).  In the Big 8, when Missouri got worse, Oklahoma State got better - never good enough to win the conference, but better.  Then when they got busted, Colorado started getting better, and when Oklahoma got busted, here came Kansas State.  Sometimes the best way to get good is to wait for those above you to screw up.  Perhaps Michigan's recent struggles will allow some teams an opportunity.

Because you've been Indiana with Trees for my lifetime, and I'm dangerously close to being Mike Gundy's well-publicized age.  I don't remember great Minnesota teams.  (The only ones I remember were the ones Nebraska housed in the 80's and the Lawrence Maroney / Marion Barber teams.)  Most fans - and God help me, high school kids - don't dream of leading the Gophers to championships, because there's no reason to think that such a possibility exists.  Not in their lifetime, nor in their father's lifetime.

Because you can't or don't hire coaches who are either: ahead of the curve, or; young and competent.  Heck, you can't even manage one of them and hope they grow into the other.  (Not a new trend, you interviewed Solich before you hired Mason.)  If you do hire a young one, he's not competent; if you hire a competent one, he's not good enough to take you where you think you deserve to be, and then it gets even harder to hire a better one.

(Sidebar: From the outside, firing Glen Mason, the most successful coach in forty years, looks like a fit of pique after some ill-advised comments and a bad bowl collapse, even if it's not.  Nebraska couldn't get anyone competent after firing Solich for winning 9 games; that's not why they fired him, but that's sure how it got spun, wasn't it?  Similarly, Mason's firing got spun as "Geez, freaking Minnesota doesn't understand that they aren't Michigan; heck, they're not even Michigan State."  You may not like it, you may not agree with it, but compare Nebraska's coaching search after firing Solich to the awesome success you had landing Tim Brewster - a candidate in demand by precisely no one.)

Because you gave up any competitive advantage you may ever have had to play in the Hubert H. Humphrey Mausoleum.  You'd have been better off playing in one of the seven Sam Goody's at Mall of America.

Because Gopher football is as important to the average Minnesotan as BC football is to the average Bostonian.  Seriously, how much time does WCCO spend on Gopher football compared to the Twins and Vikes come September?  Compare that to the level of coverage that Wisconsin or Iowa gets within their borders.  Heck, even in Omaha, Hawkeye fan takes the fact that you can buy Nebraska gear on their side of the river as casus belli.  Wisconsin has to share hearts and minds with Brewer/Packer fans, but they don't have to share it in the same town; in Minneapolis, are the Gophers ever above the fold except possibly on 12 Saturday mornings a year?  Heck, you can't even spread into the Dakotas; the Argus Leader in Sioux Falls has covered Nebraska and Iowa more for years - and the entire Dakotas is Viking/Twin country.  Minnesota kids don't evangelize their fandom; I went to school with lots of Minnesotans, and none of them lived and died with Gopher football.  You don't care, pure and simple, or at least not enough of you care enough.

And since when has Iowa consistently competed at the top of the Big Ten?  Iowa's shared the conference title three times in 20 years.  Wisconsin, shared twice and once outright.  (BTW, Colorado won the Big 8/12 the same number of times in the same timespan.)  That not the right definition of competitive?  Iowa's finished the season ranked 9 of the last 20 years.  I can't find Sconnie's records conveniently on the wikipedia, but it's gotta be slightly better, but they've not gotten over on the Big Ten Oligarchy with that much regularity either.

That's why not Minnesota - at least why Minnesota wasn't and isn't.  Full stadiums and fan support can definitely help if you can sustain it, but if you can't, well, in the Bottom Third of the Big Twelven is where you are, and where you will remain, because talented kids aren't going to put up with Minnesota winters without the solace of winning or feeling loved.

Seriously, Minnesota football is Miami with snowmobiles and without a talent hotbed ten miles from the stadium or any discernable identity.  You feel you deserve to be good without having put in a lick of commitment to be there - the new stadium is simply undoing previous really bad decisions.

Though it may sound as if Glen Mason is working me like a puppet, it's not true.  I've got no stake in Glen Mason past not missing him when he managed to make Kansas frisky in the mid-nineties.

Don't mistake all my attention on Minnesota football for hate.  It's not hate, it's pity with aside of fear.  I saw Nebraska entering the spiral that Minnesota entered in the Sixties after Osborne retired, and we were perilously close to it.  Thankfully, we had a cultural commitment to college football - not hockey, not cheating at basketball, no pro sports to divide our attentions and dollars - and a fair head coaching prospect who loved the fans and the culture, even if he's got a lot of bark left on him.

You want your next step?

He will move the needle - perhaps not how you want it moved, but it's not like bad publicity can kill you at this point.