It's Lonely at the Top

Share All sharing options for: It's Lonely at the Top 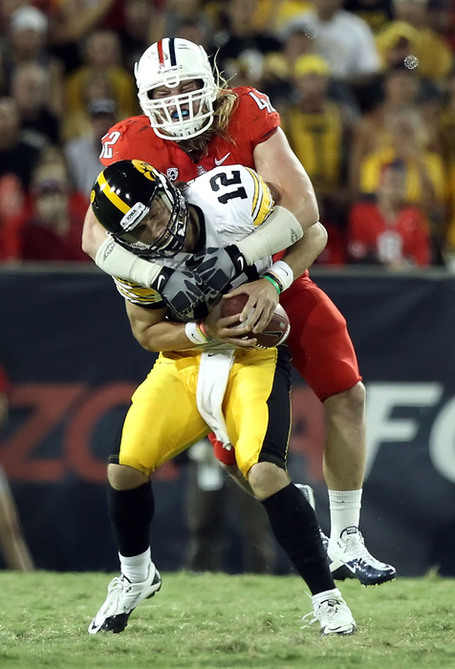 Four times in a row?  Seriously?

I watched a whopping fourteen hours of football Saturday -- three more than I usually do.  The couch binge was necessary because the Pac 10 insists on playing football when 90 percent of the country is asleep.  It blows my mind that at a time when that league is making a push to broaden its influence - staging coast to coast media tours and employing D.C. Comics to design a new logo - Larry Scott still hasn't figured out that a 5:00 p.m. PST kickoff > 8:00 p.m. kickoff.

But for all of the Pac 10's problems with exposure, the Big Ten is still struggling with delivering on its promise to be a more competitive entity from top to bottom.  Sure, we're currently ranked second in ESPN's Conference Power Rankings.  And yes, our out of conference win percentage is the best it's been in years.  But although the league's ceiling (Ohio State) might be a few floors higher than it was in 2007, 2008, and 2009, and its middle tier (Northwestern, Michigan State, Michigan, Penn State) is an opportunistic 11-1, we still lack the single most defining feature of an elite league: multiple power brokers.

I'm pointing to you Iowa and Wisconsin.  Coming into 2010 the Big Ten race was supposed to be a triple-headed monster - three Top 10 contenders with heavy offenses and disciplined defenses.  Instead, on paper it suddenly looks like it's Ohio State and everybody else.  Again.  Sure, Wisconsin is 3-0, but they've made enough mistakes to be 1-2.  And now they're without one of the best defensive players in the Big Ten.  Just how big is Chris Borland's loss?  He was the only guy in the Badger front seven talented enough to spy Terrelle Pryor.

Meanwhile, the Hawkeyes were upset in Tucson after they dug a Grand Canyon sized hole for themselves on turnovers, special teams blunders, and by inexplicably allowing four sacks in a row when they had the chance to win the game on their final offensive possession.  The last time I saw a line play that badly was Ohio State's loss to Purdue last season.  Sure, the Buckeye front five rebounded, delivering four consecutive 200 yard rushing performances to close the season, but any comeback by the Hawkeyes will have to take place without starting rusher Jewel Hampton.

Of course anything can happen.  But for now it's lonely at the top.