Share All sharing options for: Et Tu, Purdue? Then fall the Boilermakers???

Before the College Football season began, Purdue was a 'sexy chic' pick to make some noise in the Big Ten, and not without reason.  The 2009 season ended strong, and were only a 37 point shellacking at the hands of Wisconsin three point loss to Michigan State from going to a bowl.  There were enough woulda/coulda/shoulda moments in the 2009 season (close losses to Oregon, Notre Dame, and Northwestern)  for Purdue fans to realistically think that 2010 could be an 8 or 9 win season.

That early season promise has gone up in flames, with poor execution and injuries as the catalyst.  Purdue had their 'Minnesota Moment' this past Saturday, losing to Toledo 31-20 while losing their starting quarterback, Robert Marve, for the season. [ED NOTE: It was just confirmed today that the speculation was correct:  Marve is done for the year.]

So, where does Purdue go from here?  Well, quite frankly, to a bowl.  Yeah, that's right.  Purdue is still going bowling.  Follow my bowld reasoning (did you see what I did there--bowld.  It's like a magic trick, only cooler), after the jump.

The injuries to Robert Marve and Keith Smith, on the heels of Ralph Bolden's injury in the spring, is a brutal way to start your season.  Smith was especially tough, as he is arguably the most talented wide receiver in the Big Ten, and filling his shoes will be difficult.

But I'm not here to make you feel sorry for yourself, Boiler fans.  No, it is time to BOILER UP, and look at what you do have -- and what you have is a team that can get to a bowl game.

FIrst off, Pudue is running the ball as well as anyone in the Big Ten, even without Bolden.  Purdue has a good foundation in Dan Dierking, Antavian Edison, Al-Terek McBurse (what is he, and Arabian Scottsman?  Greatest name in the Big Ten nominee) and Jared Crank (nomination for most perverted name in the Big Ten).  The worst...worst YPC average among the four is from Crank, and that's a paltry 5.3 yards.  Yes, Purdue, you average...at worst...5 yards whenever you run the ball, and are averaging almost 200 yards on the ground for the first four games.  That is an exceptional foundation on which to build.  Run the ball, control the clock, keep your defense off the field.  Now, you have to finish and score, but running the football is something we tend to do here in The Empire, and you guys do it as well as anyone so far this year. 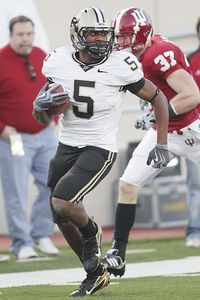 Now, let's talk quarterback.  I'm not ready to throw Rob Henry over the side yet.  After watching him play against Toledo, he did some things well.  He looks like a prototypical spread quarterback, and he has good wheels--he's currently second on the team in rushing.  That's not his problem, and we know that.  A 51% completion percentage is unacceptable, and a bad, bad pick late in the game is something he will learn from.  That said, he was rallying Purdue to what looked like a win before the pick.  As a comparison to, uh, another guy that wore the #15 at the QB position from Purdue, in his freshman season he was only 11 for 21 with 97 yards at Toledo.  Drew Brees turned out okay, so let's be a little more patient with Henry.

The bye week couldn't have come at a more opportune time for the Boilermaker offense, as it will give young Mr. Henry an extra week to get comfortable as the starter and work with his receivers.  Speaking of receivers, they still have a legitimate weapon is Cotez Smith, but someone else will need to step up.  Personally, I think there is enough talent between Kyle Adams, Jutin Siller, and Dan Dierking to give Purdue an offense that can be better than their current rank of 88th in the FBS.

Now, let's talk schedule.  After the bye, Purdue opens up with Northwestern and Minnesota.  With the way Dan Persa is playing, Northwestern is a tall order, but Northwestern's defense gives Pudue a chance.  Historically, Purdue has dominated Northwestern, at least according to the Boilermakers.  Northwestern's football records don't go back more than 15 years due to a mysterious fire that is spreading, even on to the Internet.  But with Pudue's ability to run the ball, and a controlled, mistake free passing game from Henry, they can win.

After that is Minnesota.  Rob Henry will not have to throw one pass and Purdue will amass 793 yards on the ground.  Win.  That's four.  After a loss to Ohio State, Illinois is on the schedule.  Ron Zook will walk to the 50 yard line and hand you the victory in pre-game warmups.  That's five. 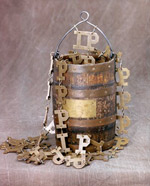 Win this and Purdue goes bowling.  I think.

Following three losses, it will come down to a win and in scenario against Indiana for the Old Oaken Bucket.  Purdue has won 11 of the last 13 matchups, but Indiana has the stronger team this season.  Well, at least on offense.  By now, Purdue's offense will have found an answer at WR, Rob Henry will have settled in, and it comes down to which defense can make more stops?  I go with Purdue on this one, as Indiana's defense is...just...bad.

That's six, and that's a bowl.  Detroit will have never looked so good, but it's better than not going bowling at all.